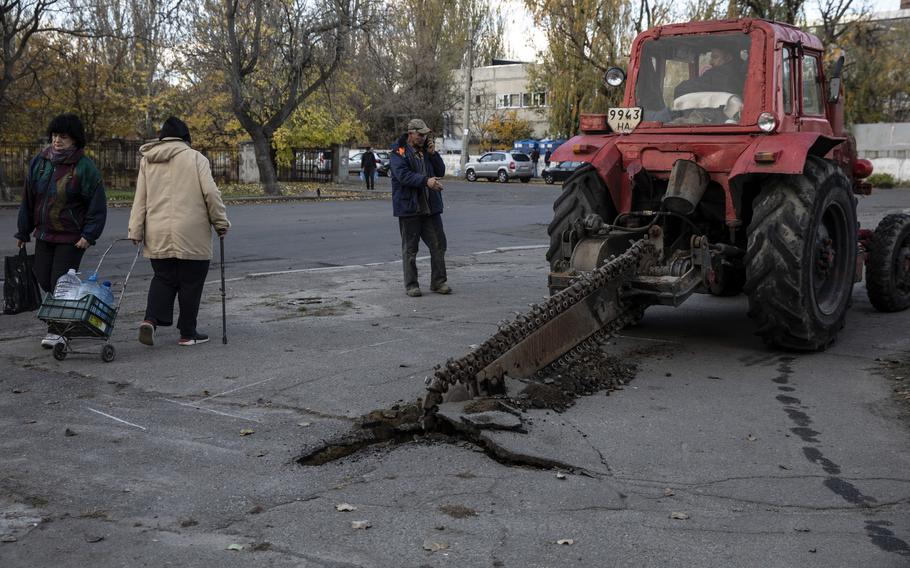 Workers try to repair water lines under a street in Mykolaiv in southern Ukraine on Monday. Many homes in the city have been without clean drinking water since last April. (Heidi Levine/Washington Post)

“With precision-guided strikes, we continue to effectively hit military infrastructure facilities, as well as facilities that affect the reduction of Ukraine’s military potential,” Shoigu said during a defense ministry conference call, according to Russ ian media.

Shoigu’s boast about the success of Russia’s airstrikes came a day after Russia launched a fresh barrage of cruise missile attacks that hit at least 10 regions across Ukraine, damaging energy and infrastructure facilities and leaving many residents of Kyiv, the capital, temporarily without domestic water service.

Ukrainian officials have accused Russia of trying to terrorize the civilian population by repeatedly hitting energy infrastructure, raising the prospect of a lack of power and heat during an ever nearing, bitter winter. Western officials have repeatedly condemned Russia’s attacks.

Attacking civilian targets with no military purpose is potentially a war crime, but it can be difficult to prove that energy infrastructure does not also help support soldiers on the front lines.

“Instead of fighting on the battlefield, Russia fights civilians,” Ukrainian Foreign Minister Dmytro Kuleba wrote on Twitter on Monday. “Russia does this because it still has the missiles and the will to kill Ukrainians.”

Shoigu, who has been under pressure in Moscow because of repeated battlefield setbacks, insisted on Tuesday that Russia was trying to prevent casualties among Ukrainian citizens — a false assertion given repeated bombardments on residential areas of Ukraine since the start of the Feb. 24 invasion.

“Comprehensive measures are being taken to prevent the death of Ukrainian citizens,” Shoigu said according to Russian media.

Monday’s strikes hit 10 regions and damaged 18 targets, most of which were energy facilities, Ukrainian Prime Minister Denys Shmyhal said. At least 13 people were wounded across the country, according to Ukraine’s national police. In Kyiv, water service was fully restored on Tuesday, Ukrainian officials said.

“Because of the aggressor’s missile attacks on critical infrastructure facilities, we are considering various scenarios for the development of events. The worst is when there is no electricity, water and heat supply at all” wrote Klitschko on Telegram.

Shoigu also spoke on Tuesday with Turkish defense minister Hulusi Aka, as the United Nations warned that cargo ships carrying grain from Ukrainian ports would stop sailing after Moscow announced that it was backing out of a Turkey-brokered deal to safeguard passage of the boats in the Black Sea.

Ukraine had warned for several weeks that Russia was planning to pull out of the agreement, and senior Russian officials said Monday that they were indeed canceling it — in response to Ukrainian drone strikes on Russian naval assets in Crimea, where its Black Sea fleet is headquartered.

During his conference call on Tuesday, Shoigu reiterated that Russia’s “partial mobilization” drive had been completed after 300,000 fighters had been summoned as reinforcements for the war in Ukraine.

Shoigu said that only 87,000 of those recruits had been sent to combat, and he added that “shortcomings in the activities of the military commissariats” had been resolved, a reference to the chaos that was created by the mobilization, in which many conscripts said they were not given proper equipment or training, and others said they were summoned for duty despite being old, sick, or otherwise exempt.

While officials in Moscow have insisted the mobilization’s goals have been met, the European Union’s foreign policy arm said that Russia had launched a new conscription drive in Crimea, the peninsula Russia illegally annexed from Ukraine in 2014, and that this included the “groundless targeting” of Crimean Tatars, a predominantly Muslim ethnic minority.

“Crimean Tatars are being deliberately and disproportionately targeted in the implementation of Russia’s mobilization order and reportedly forcibly involved in Russia’s war of aggression against Ukraine, their traditional homeland,” the E.U. statement said. It called Russia’s actions “yet another violation of international law.”

Crimean Tatars make up about 13% of Crimea’s population, and have faced discrimination since Russia’s illegal annexation. Early on in Russia’s mobilization drive, activists warned that the Tatars were being disproportionally targeted and that many men of fighting age had been forced to flee.

There is no official tally of how many Tatars were summoned for military duty, however Crimea SOS, a rights organization, estimates that 90% of mobilization notices in Crimea were given to Tatars.