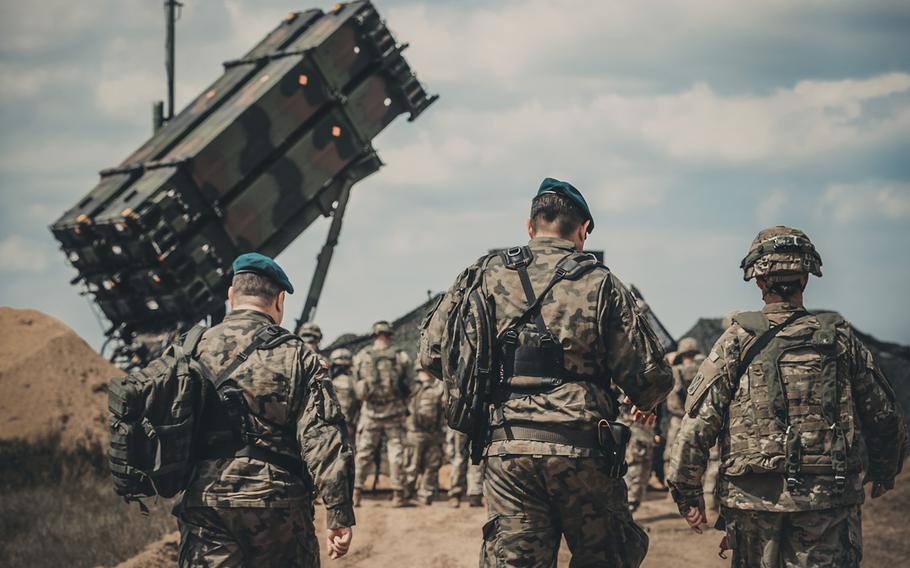 Russia's deadly missile strikes across Ukraine this week have renewed calls for the United States and its partners to provide the government in Kyiv with advanced air defense systems capable of downing incoming fire.

The carnage - stretching from Lviv in the west to the eastern city of Kharkiv - could have been much worse. Ukraine's military intercepted about half of the 84 missiles and 24 armed drones fired by Russia on Monday and Tuesday, Ukrainian President Volodymyr Zelensky has said. Additional strikes were reported Wednesday.

"When Ukraine receives a sufficient quantity of modern and effective air defense systems, the key element of Russia's terror - rocket strikes - will cease to work," Zelensky told Group of Seven leaders this week.

Two U.S. air defense systems known as NASAMS are weeks away from delivery, the Pentagon said following the strikes, and efforts are underway to expedite the process.

Speaking Wednesday at NATO headquarters in Belgium, Defense Secretary Lloyd Austin said the United States and its partners are doing "everything we can, as fast we can, to get the Ukrainian forces what they need to protect the Ukrainian people," though he did not announce any new aid.

Q: How does air defense work?

But it's not as simple as spotting something on radar and firing at it. A blip on a screen has to be identified by how it behaves and its characteristics, including its speed and altitude, said Tom Karako, director of the Missile Defense Project at the Center for Strategic and International Studies, a think tank.

Operators must also determine if an object is friendly, such as a civilian or allied military aircraft. If a threat is identified, system operators and commanders then must decide if there is anything they can do to stop it. Time is always the enemy in air defense, and a missile may be traveling fast enough to leave a monitored area before troops can identify, track and fire on it.

"You may be able to see it," Karako said, "but you may not be able to do anything about it."

The composition of each air defense system varies. For instance, the NASAMS suite - short for National Advanced Surface-to-Air Missile Systems - includes a command post, sensors, a radar system and munitions that can be fired from a stand-alone pod or from the back of a truck. This is the air defense system used to protect the White House.

Q: Where is air defense limited?

A: The earth itself presents challenges depending on what kind of munition is used.

Ballistic missiles fired from land, for instance, produce a lot of heat, which helps detect their launch right away. They also fly with predictable trajectories, the Missile Defense Project wrote in a recent report. Cruise missiles, on the other hand, can be launched from the air or from ships. They are designed to fly low, where the horizon and other background features like terrain can obscure the weapon, making it undetectable for crucial minutes.

That means the physical space that air defense systems effectively monitor can expand or shrink depending on how high the incoming projectile is: The higher the object, the less background noise there is, making it easier for the system's sensors to detect.

The U.S. military is trying to change that, Karako said. One potential solution is to distribute sensors in several places that can pick up information about an object and direct it to an air defense crew, rather than rely on a few systems that may not be close enough. Another possible solution is to place sensors high on tall objects, like a tower, creating a wider area for them to monitor.

Another inherent problem for air defense: There are always more threats than systems meant to defeat them. While Ukraine has its own capabilities, like the Soviet-era S-300, they are probably priority targets for Russia and some have been destroyed since the invasion.

"What Ukraine is asking for, and what we think can be provided, is an integrated air missile defense system," Chairman of the Joint Chiefs Gen. Mark A. Milley, appearing alongside Austin, said Wednesday, describing a mix of systems that have different ranges. "That doesn't control all the airspace over Ukraine, but they're designed to control priority targets that Ukraine needs to protect."

Q: What have allies provided?

A: In July, the United States pledged two NASAMS to Ukraine. A midrange system, its radar can see threats up to roughly 80 miles away, depending on the radar being used and other variables such as weather and the size and altitude of a target. Those will arrive within several weeks, officials say, but there will be a much greater delay for the an additional six systems the United States has promised to Ukraine. Those will probably take years to procure and deliver, the Pentagon says. They are part of a larger, long-term effort to build a sustainable defense infrastructure in Ukraine and must first be produced.

Other allies have pledged similar capabilities. Germany said four of its IRIS-T air defense systems are bound for Ukraine. The system is so new that it hasn't been used in a combat environment, according to analysts. Ukraine also has shown interest in France's SAMP/T system. French President Emmanuel Macron on Wednesday pledged that help would be provided within weeks, but he did not specify what systems would be sent.

A challenge in sending air defense systems is the hardware's scarcity and sensitive components. The United States has inventory, but much of it is at bases overseas, notably in the Middle East and Europe, where American personnel have faced attack or the heightened risk of it. Washington has been reluctant to share other capabilities, such as the Patriot missile system, that the Pentagon would not want captured, Karako said. Milley mentioned the platform during his remarks Wednesday but stopped short of saying whether the United States is considering changing its posture.

National Security Council coordinator John Kirby told reporters Tuesday that Ukraine already has elements of a "layered air defense" in its arsenal, including short-range Stingers sent by the United States early in the conflict and the longer-range, Russian-made S-300. "There is no one silver bullet weapons system that is best used against cruise missiles," he said.

Q: What is Russia using to attack?

A: Russia is firing a mix of older and newer missiles from a variety of locations, including from strategic bombers in the Caspian region and Kalibr cruise missiles lobbed from the Black Sea, said Yuriy Sak, an adviser to Ukraine's defense minister. Kalibr missiles are costly and meant for high-priority targets, making the Russian strategy to hit civilian infrastructure perplexing, as doing so does not clearly advance its military goals. The missiles, designed to penetrate the air defenses of stationary ground targets, fly autonomously and largely horizontally at low altitude, along preprogrammed coordinates.

The Russians have also engineered their S-300 air defense systems to fire at land targets, Sak said, giving the missiles moderate range but because they fly fast at low altitudes, interception is difficult. In July, the governor of Mykolaiv, a city in southern Ukraine near the Black Sea, said Russian forces had affixed GPS devices to their S-300 warheads being fired at land targets, but that they were still inaccurate.

Russian drones provided by Iran also have tested Ukraine's air defense systems. They are small and operate low to evade radar, Sak said, but their proximity to the ground means they are vulnerable to Ukrainian soldiers carrying rifles.

"Our air defense forces show a very good result in interceptions," Sak said. "With Western systems it will be even better."

The Washington Post's Emily Ruahala in Brussels, and Karen DeYoung and Karoun Demirjian contributed to this report.