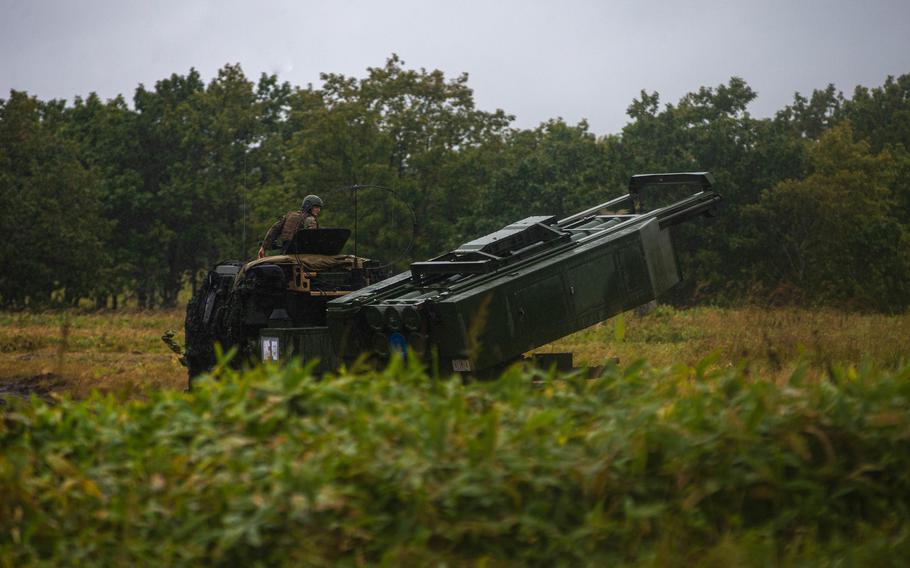 High Mobility Artillery Rocket Systems, or HIMARS, are in drills with 3,000 Marines on Japan’s northern island of Hokkaido and on the Philippines’ main island of Luzon. (Diana Jimenez/U.S. Marine Corps)

The Marine Corps is pairing long-range rocket systems that have proved their worth in Ukraine with stealth fighters for training in Japan and the Philippines, a tactic that experts claim may help deter Chinese aggression.

F-35B Lightning IIs and High Mobility Artillery Rocket Systems, or HIMARS, are in drills with 3,000 Marines on Japan’s northern island of Hokkaido and on the Philippines’ main island of Luzon. The two exercises – Kamandag in the Philippines and Resolute Dragon in Japan - began early this month and conclude Friday.

Marine Corps Commandant Gen. David Berger touted the exercises in a series of tweets Friday and Saturday that noted the allies involved, which include South Korea, and the “impressive weapon systems” deployed in a “geographically distributed environment.”

The Marines’ variant of the joint strike fighter can take off from short runways and hover to land vertically. The jet’s stealth capabilities make it hard for the enemy to detect, and its computers can share targeting data with other aircraft and weapons.

The truck-mounted HIMARS can strike targets 50 miles away and rapidly move around the battlefield making it tough for the enemy to pinpoint. The Defense Department, which has sent 20 HIMARS launchers to Ukraine to help battle Russian invaders, announced the shipment of four more of the weapons Oct. 4.

The ability to operate the stealth jets and long-range rocket systems from the Philippines gives the U.S. more options in a Taiwan contingency and could complicate Chinese calculations, Ian Chong, an associate professor of political science at the National University of Singapore, said in an email Wednesday.

Chinese efforts to reunify Taiwan, a thriving democracy that the communists regard as a rebellious province, are a potential source of conflict.

President Joe Biden said in a CBS "60 Minutes" interview aired Sept. 18 that U.S. troops would defend Taiwan if China invaded, although the White House later walked back those comments. It did the same after the president made a similar statement while visiting Japan in May.

The stealth jets and artillery that the Marines are training with this month could be used to thwart an adversary’s amphibious assault in the Indo-Pacific, or launch their own, New Zealand-based U.S. security expert Paul Buchanan said in an email Wednesday.

“The US Marines have been looking at HIMARS in an anti-ship role, and the northern Philippines is very near Taiwan,” Chong said. “Of course, such capabilities are equally applicable to a South China Sea contingency. Such cooperation could make the Philippines a potential target for [People’s Republic of China] pressure, or even strikes in an emergency, however.”