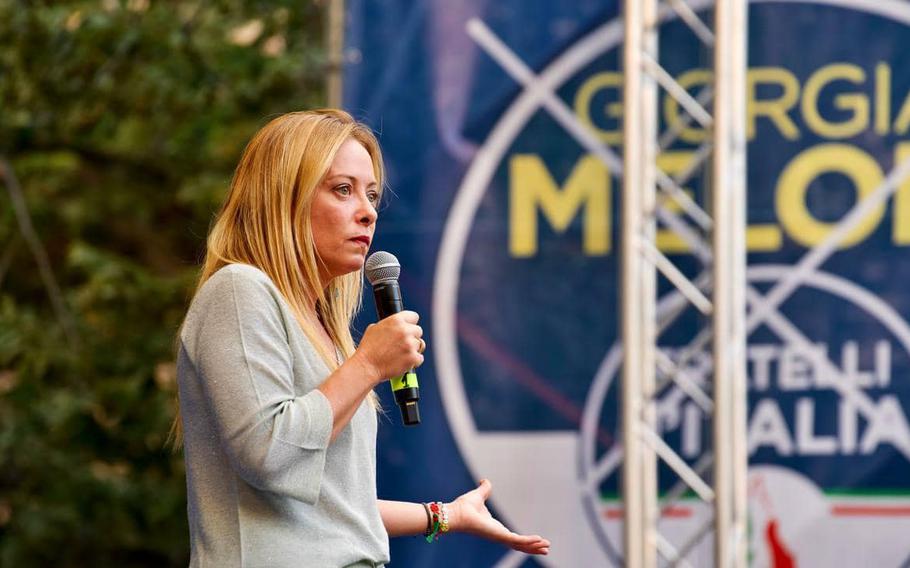 Giorgia Meloni speaks to voters during a campaign event in Ancona, Italy, Aug. 24, 2022. Meloni, now prime minister, is expected to maintain strong relations with the U.S. and NATO. (Giorgia Meloni/Facebook)

NAPLES, Italy — Italy’s relationship with the U.S. and NATO should stay strong under the leadership of incoming Prime Minister Giorgia Meloni, but a cold winter and a worsening economy could challenge her support for Ukraine, according to observers.

Under Meloni, who last month became the first woman elected to the position, Italian support for the U.S. and its policies largely will continue, said Riccardo Alcaro, a researcher at the Rome-based think tank Instituto Affari Internazionali.

“If anything, (there will be) even greater attention to being fully aligned or perceived as a reliable, close ally of the U.S.,” Alcaro said.

Meloni’s right-wing, nationalistic Brothers of Italy party along with two others that make up the country’s new governing coalition long have been vocal in their willingness to “bet on the relationship with the U.S.,” he said.

According to the latest Defense Department statistics, the U.S. has 12,477 active-duty service members stationed in Italy and several installations there, including Aviano Air Base, U.S. Army Garrison Italy at Vicenza and Naval Air Station Sigonella in Sicily.

Those troops often work with their Italian counterparts. For example, in the lead-up to Russia’s Feb. 24 invasion of Ukraine, Italian carrier strike group Cavour sailed with the Harry S. Truman Carrier Strike Group in the Mediterranean Sea.

Meloni’s pro-NATO stance hopefully will mean continuity in Italy’s position on Ukraine and its approach to the alliance, said Max Bergmann, director of the Europe program at the Washington-based think tank Center for Strategic and International Studies.

But the troublesome connections to Russia of Meloni’s fellow coalition leaders, Silvio Berlusconi and Matteo Salvini, could foment problems, he said.

Salvini also has criticized sanctions levied by the U.S., European Union and others against Russia for its unprovoked war on Ukraine, claiming that they aren’t working and are hurting Italy. Meloni believes the sanctions are working.

“The fear isn’t that Meloni will go soft on NATO or Ukraine but that because of the coalition dynamics … this could be a divisive issue within Meloni’s coalition that she will have to manage, and that’s the real source of concern,” said Bergmann, who served in the State Department for six years.

If Meloni’s popularity ebbs, energy prices stay high and Italy’s economic woes worsen over the coming months, her coalition partners could see opportunities to push policies that go against what she stands for, he said.

For example, if the U.S. or EU propose stronger sanctions against Russia, Salvini could say that the only way he will stay in the coalition is if Italy wouldn’t agree. That could force Meloni to choose between keeping the government intact or vetoing the sanctions and drawing scorn from Western allies, he said. 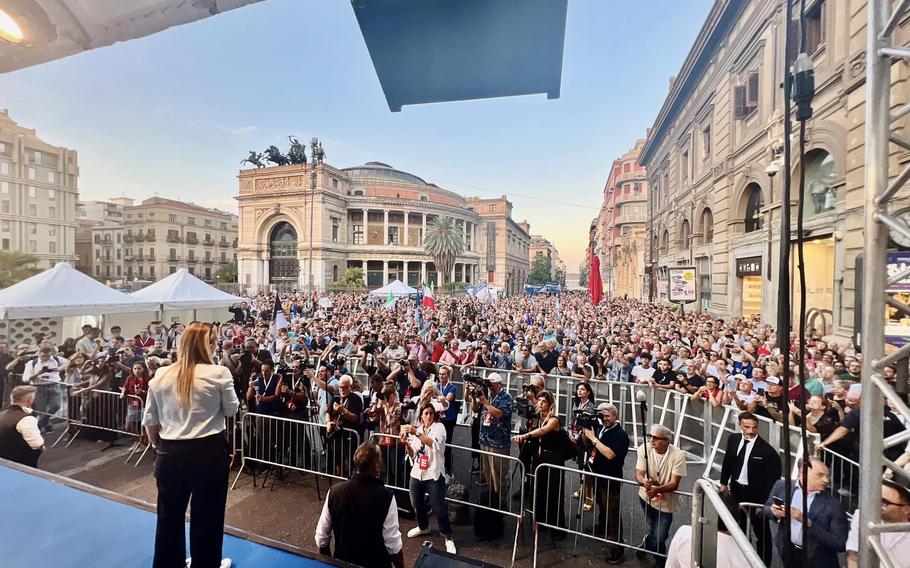 Giorgia Meloni addresses voters during a campaign event in Palermo, Italy, Sept. 20, 2022. Meloni was elected prime minister in September, and analysts say she is likely to maintain strong relations with the U.S. and NATO, though her government's coalition partners could test that commitment. (Giorgia Meloni/Facebook)

Although Forza Italia and League have complained about the potential economic impacts to Italy, neither party ultimately opposed sanctions against Russia, said Giovanna De Maio, a visiting fellow at the Institute for European, Russian and Eurasian Studies at George Washington University, who also noted Meloni’s affinity for American culture.

She views it as improbable that Meloni would walk back Italy’s support.

However, the three parties’ united front may be crumbling already, with Salvini’s recent push to rethink the sanctions and Berlusconi’s defense of Putin on Italian television last month, according to a Sept. 23 Politico report.

Meloni also faces challenges in her relationship with the U.S. She lacks the influence and stature of outgoing Prime Minister Mario Draghi, especially when it comes to European economics and the future of the EU, he said.

In addition, Meloni’s association with the Republican Party in the U.S., including an appearance at the 2019 Conservative Political Action Conference, and her party’s fascist roots lead to concern about the potential rise of far-right nationalism in Europe, Bergmann said.

That presents a problem for President Joe Biden. However, diplomacy and maintaining the important relationship between Italy and the U.S. will take priority, he said.

“The U.S. will seek to engage, will seek to develop strong relations (with Meloni), and (officials) are going to want to keep Italy as a really constructive player when it comes to the war in Ukraine, Russia and all things NATO,” Bergmann said.