Refuting annexation, Ukrainian forces push on from Lyman toward Luhansk 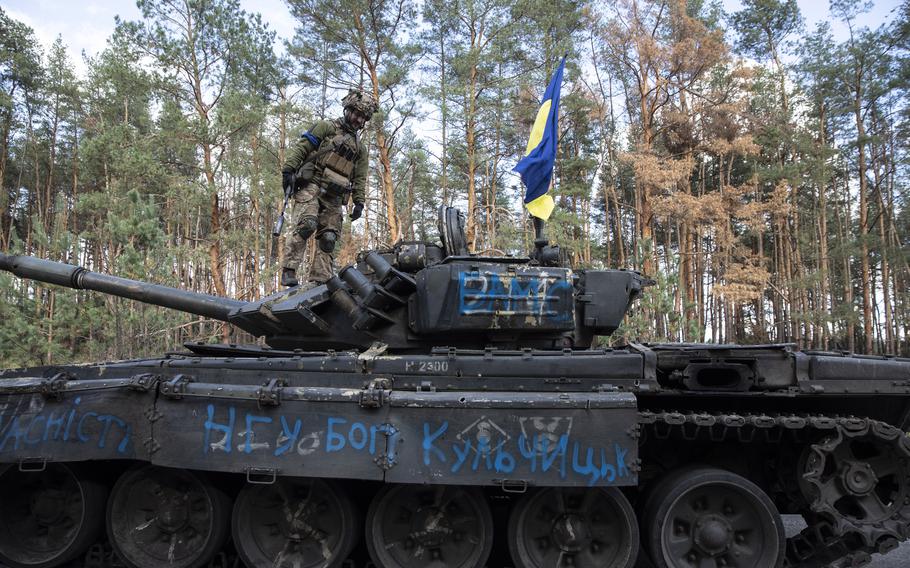 Leonid, a Ukrainian soldier, atop a tank on the outskirts of Lyman. “They’re going to need a bigger grave,” he said of Russian reinforcements. (Heidi Levine/For The Washington Post)

LYMAN, Ukraine — The Ukrainian soldiers waved, hooted and raised their fists in triumph as they drove out of the strategic eastern city of Lyman on Monday, riding M113 armored personnel vehicles provided by Western countries. They passed eight corpses of enemy Russian soldiers who died trying to run from a Ukrainian counteroffensive that swept through the area and is still going, putting the lie to President Vladimir Putin’s annexation claims.

The bodies were bloated, and some had open mouths, as if still wearing an expression of shock. At the moment the Ukrainian troops were driving by, the dead Russians were being unceremoniously placed into black bags.

Just two days after Ukrainian troops claimed victory in Lyman, a city of 22,000 that the Russians had used as a vital transport hub in Ukraine’s Donetsk region, there was almost no military presence left there — a sign of how quickly Ukrainian forces are advancing after months of incremental gains, if any.

After Moscow’s “partial mobilization” intended to call up to 300,000 new troops, Kyiv appears to be making a major push to recapture as much occupied territory as it can before those reinforcements arrive.

Forcing the Russians to retreat from nearly the entire northeastern Kharkiv region and now from Lyman has put Ukraine’s military in a strong position to attack the Russians occupying the neighboring Luhansk region, the border of which lies not quite 15 miles from Lyman by road.

On Monday, the State Duma, Russia’s lower house of parliament, voted unanimously to ratify Putin’s claimed annexation of the Donetsk, Luhansk, Kherson and Zaporizhzhia regions in Ukraine, though even the Kremlin spokesman conceded he did not know the precise borders of Russia’s new territories given that Russia does not fully control them.

In a separate, slower-moving counteroffensive to the south, the Ukrainians achieved another breakthrough over the weekend, reportedly pushing the Russians back some 20 miles along the west bank of the Dnieper River, part of an initiative to retake Kherson city, which fell to Russia early in the war.

As Kyiv plots its next moves, Ukraine’s victory in Lyman will remain symbolic for the message it sent to the Kremlin: Putin’s annexation of the partly occupied regions was a farce. Lyman was very much part of the lands that Putin claimed in a ceremony in Moscow on Friday but just one day later, his soldiers left in a hurry — some dying on the way out.

When told that at least in Putin’s eyes, her citizenship had changed for that one day, Lubov Vildyaskina started laughing. “Are you serious?” Vildyaskina asked. “I’m in shock.” 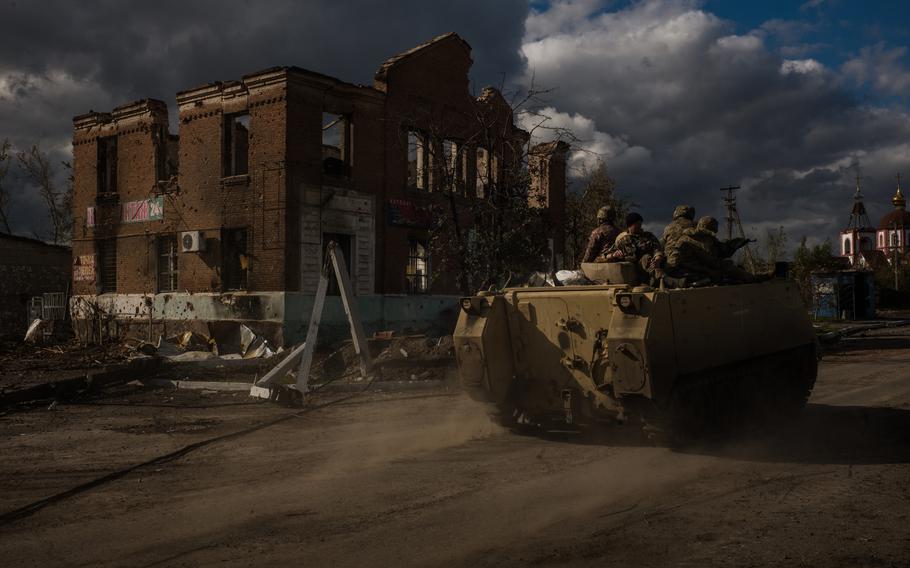 Ukrainian troops in an armored personnel carrier drive through the village of Shandryholove, near Lyman, Ukraine. The village sustained heavy damage in fighting that saw the Ukrainians retake control of Lyman, a key transport hub in the Donetsk region. (Wojciech Grzedzinski/For The Washington Post)

On Monday, agents from Ukraine’s internal security service, the SBU, interviewed her about what transpired under Russian occupation, including how many Russian rubles she charged for products in her small store. Across the street, forces of the self-declared Donetsk People’s Republic, the separatist regime loyal to the Kremlin, had established a police station. But they suddenly abandoned the base two weeks ago, she said. The next day, someone spray-painted, “How could you?” on the building.

Then over the weekend, the occupying soldiers urged her and others to get out of town while there was still time. Vildyaskina ignored their advice and stayed, watching as the convoys rolled out of town five months after they arrived. “Now you can sleep at night,” she said.

Though the Ukrainian military surrounded Lyman over the weekend, most of the Russian forces had withdrawn before then, locals said. A handful of enemy soldiers, however, might still be hiding in the surrounding woods.

After the Ukrainian military departed Lyman in its convoy of armored personnel carriers, a few Ukrainian soldiers implored reporters from The Washington Post not to enter the city because it could still be dangerous.

Meanwhile, on the northern approach to Lyman, soldiers from Ukraine’s 81st Air Assault Brigade were on the lookout for fleeing Russians. A burly commander said that his unit had arrested a local separatist in the nearby forest. “The unit operating here was from the area,” the commander said. “They knew the routes through the forest when they needed them.”

In the newly liberated villages, residents were twitchy at the crackles of gunfire still echoing from Lyman.

In the final weeks of the battle, villagers trapped in the crossfire often knew less than the outside world about the Ukrainian counteroffensive unfolding nearby. After months without electricity or cellphone service, information trickled in. They used firewood to stay warm and light the long nights. “We were living like cave people,” Lyudmila said.

When fighting intensified, the villagers retreated to their basements, where they were even further cut off from any news. Russian soldiers entered from time to time and warned them that the Ukrainian army would shell the area without mercy. Several elderly residents said they had returned from rare trips outside to find that the occupying soldiers had looted their food.

Then last Thursday, the battle fell quiet. Residents emerged to find that the tanks in their streets now bore blue and yellow flags. The Russians were gone, and Ukraine was back in control. The fleeing Russians, however, left a mix of anger and apathy in their wake.

In interviews across the villages of Shandryholove, Drobysheve and Novoselivka, just northwest of Lyman, on Thursday, a number of residents blamed damage to their houses on Ukrainian shelling. Others seemed to care little who controlled the land, as long as the fighting stopped.

In Shandryholove, a retired milkmaid, Nadia, laughed as her husband recalled a Soviet-era film, “A Wedding in Malinovka” in which control of a village changes, but daily realities stay the same. “Things don’t improve here,” she said.

The Russian flags that had been posted around Lyman’s city council building now lie in burned pieces on the front lawn. Documents from the Moscow-established proxy government are still inside, including a list of citizens’ complaints. One was the destruction of apartment buildings due to shelling.

Under a category labeled, “How to fix the problem,” someone typed that Russia and the Donetsk People’s Republic would create two neighborhoods in the city with new apartment buildings to replace the destroyed ones.

A page from a pro-Russian local newspaper, announcing Putin’s staged referendum for the Donetsk region to be annexed by Russia, was on the floor. The headline: “We’re returning home.”

The Washington Post’s Kamila Hrabchuk and Serhii Korolchuk contributed to this report.