The Ukrainian counteroffensive in northeast Ukraine has forced Russia to surrender a wide swath of territory that it spent months, and many lives, capturing.

Videos and photos posted on social media have provided a glimpse into what Russian troops left behind during their hasty retreat.

In videos verified by The Washington Post, Ukrainian troops have documented war machines in various states, from combat-ready tanks to vehicles in need of repair. In some cases, Ukrainian forces have obliterated Russian weapons, leaving smoldering vehicles to be discovered by the advancing forces. Russian forces may have also damaged their own weapons as they retreated.

Many of the discoveries were clustered around Izium, a strategic city southeast of Kharkiv positioned along transportation routes that had been key to Russian movements. The city also became an important intake for armored vehicles in need of maintenance, said Justin Bronk, a senior research fellow at the Royal United Services Institute.

“The abandonment started from the Russian side pretty quickly once it became clear that the highways and the railway connection north were cut off,” Bronk said.

Video filmed by approaching Ukrainian forces on the edge of Izium is notable for what it shows — and doesn’t show. The state of the equipment at the site is unclear, though much of it appears to lack significant damage. “There are enough tanks for everyone,” someone can be heard saying. “Look how many there are.”

After Russia captured Izium, video and satellite imagery showed military vehicles at the same site — indicating it may have been used as an equipment hub.

In the video posted Sunday, several tanks and armored personnel carriers are dispersed throughout a wooded area. They appear to be assembled in a circular formation, allowing 360 degrees of visibility, said retired Lt. Gen. Ben Hodges, a former commander of U.S. Army Europe. It’s possible Russian forces stopped for fuel or were waiting for a mission when they fled, Hodges said.

Hodges, who examined the video, said it appears that the Russians withdrew hastily, leaving behind tanks that show no outward signs of being sabotaged to prevent their use by the Ukrainians. The Russians may have left on foot or in other vehicles in an attempt to keep a lower profile as they fled.

“If you get out of the tank to escape, it’s because you think the tank is a target,” Hodges said.

Vehicles abandoned in serviceable condition are a boon to Ukrainian forces, who have suffered their own losses with a much smaller inventory still reliant on Soviet-era systems. While their crews work quickly to repair their own stocks, Ukrainian forces can also absorb newer Russian vehicles into their ranks because their design is familiar and they use ammunition already in circulation.

The equipment left behind in the video amounts to about a tank company, Hodges said, which is typically outfitted with about 10 or 11 tanks.

Several of them are variants of the T-80, a high-powered tank prone to breakdowns, Bronk said.

“Some of them are no doubt reasonably functional,” he said. “You would expect at a major staging point that there would be quite a lot of equipment that is there specifically because it was damaged or needed servicing.”

Another video, taken along a street in central Izium, shows a marooned 2S19 Msta self-powered howitzer. The system does not have obvious signs of being disabled.

Other pictures taken in Izium show heavier damage to Russian military equipment, indicating they were hit in battle. One armored vehicle can be seen at a gas station in the city with bullet holes, burn marks and deflated tires.

There is no panic thread.

Ukrainian forces published a video showing the husk of a TOS-1A, a multiple-rocket launcher, using its nickname “Solntsepyok.”

The soldier knew the nickname as well.

“Oh, sunshine!” he says in the video.

The system is capable of launching thermobaric munitions, which first distribute a fuel aerosol before another charge ignites the cloud, helping cause a greater explosion used to target fortified positions. It can be an indiscriminate and catastrophic weapon for people near its target.

Oryx, an open-source analyst site, has documented only five TOS-1As in Russian stocks that have been damaged, destroyed or captured.

As Ukrainian soldiers took stock of weaponry left behind in Izium, officials said they are still pushing farther into Russian-held areas. On Monday, the Ukrainian military said it had taken a further 20 settlements in 24 hours. 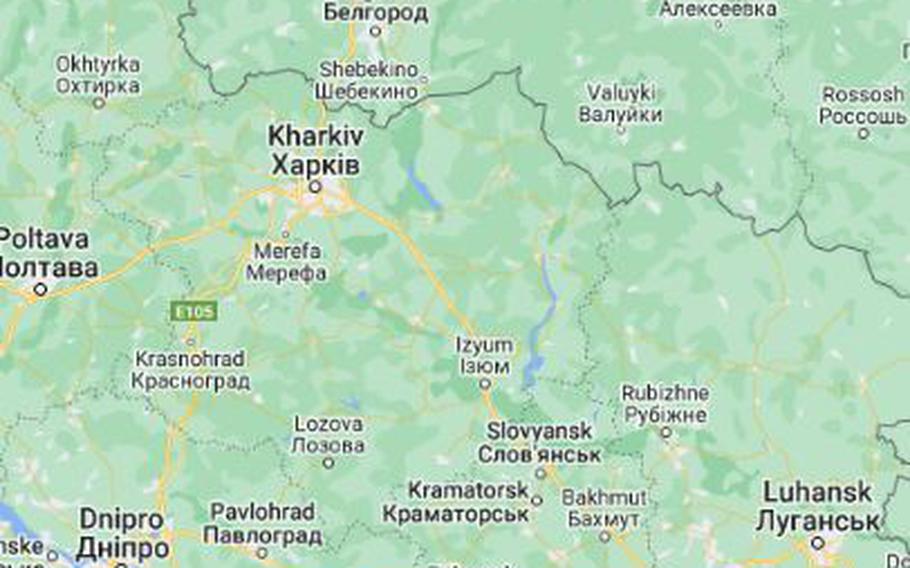 Izium is a strategic city southeast of Kharkiv positioned along transportation routes that had been key to Russian movements. (Google Maps)