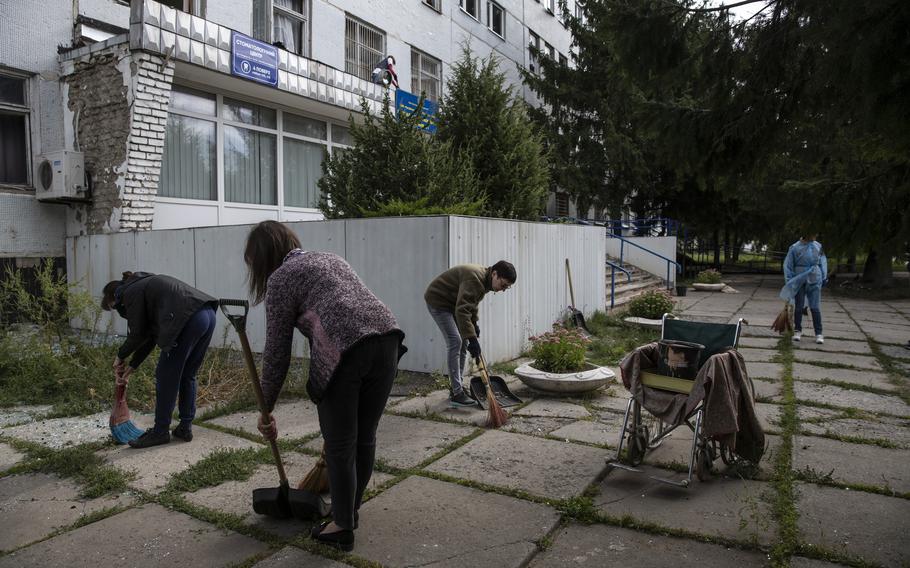 Volunteers and hospital workers clean up broken glass outside a medical diagnostic center next to the Chuhuiv Central District Hospital after it was damaged by a Russian strike on Sept. 10. (Heidi Levine/For The Washington Post)

CHUHUIV, Ukraine — After months on the edge of Russian occupation, and two days of heavy bombardment, residents of this beleaguered town came out Saturday to clean up — and celebrate, as a fast-moving Ukrainian counteroffensive pushed Russian forces into a stunning retreat from key strategic areas in the northeast Kharkiv region.

As the advancing Ukrainian troops regained lost territory with shocking speed, liberating the town of Balakliya and raising their blue-and-yellow flag over the city of Izyum, jubilant Ukrainians and officials in Kyiv and Western capitals indulged in a daring hope: maybe the grinding, stalemated war was swinging their way.

"Everything is going to be Ukrainian again," cried Natalia Khubezhova, 48, who was one of dozens of festive residents of Chuhuiv out sweeping up glass and repairing doorways on the village hospital, which was struck by a rocket Friday. Tears ran from her eyes as she hailed the progress of Ukrainian soldiers, including her husband and son.

"We are all ready to go into battle!" she said, brandishing her broom.

The Russian Defense Ministry on Saturday confirmed that it had pulled forces out of Balakliya and Izyum, after a decision to "regroup" and transfer them toward the regional capital of Donetsk in the south "in order to achieve the goals of the special military operation."

The stunning rout of Russian forces by Ukraine's flash counteroffensive in the Kharkiv region does not, on its own, signal a decisive shift in the war to Ukraine's advantage.

Russia still occupies extensive Ukrainian territory, including the cities of Mariupol, Zaporizhzhia, Melitopol and Kherson, and Russian troops still control Putin's coveted "land bridge" to Crimea, which Russia annexed illegally in 2014. And on Saturday afternoon, Russia immediately began to pummel the reclaimed territories with a fierce barrage of high-powered missiles.

"A major defeat," Igor Girkin, a hard-line former commander of separatists in Ukraine, lamented in a pro-Russian military Telegram channel.

Ukrainian Defense Minister Oleksii Reznikov said his country was still far from claiming any triumph. "A sign of victory for me will be boarding a plane in Kharkiv and landing in Mariupol," Reznikov said in a speech Saturday at a conference in Kyiv.

German Foreign Minister Annalena Baerbock, speaking at the same conference, cheered Ukraine's gains. "Troops are moving forward; they are not only gaining back territory but liberating people," Baerbock said. "I think it's really a moment of hope, even though maybe it's a small moment of hope. This is what we need."

In Washington, a Pentagon official called the advances "highly encouraging."

At the very least, Ukraine's surprise thrust into the northeast region of Kharkiv, after launching a separate counteroffensive that drew thousands of Russian troops to the southern Kherson area last week, has allowed the country to seize momentum in what had become a grinding artillery standoff.

Only two months ago, Ukraine was forced to withdraw from the city of Lysychansk, ceding the entirety of the region of Luhansk to Russian control. Since then, however, Russian artillery has made only incremental advances. But on Saturday evening, the Luhansk governor, Serhiy Haidai, tweeted that Ukrainian troops had reached the outskirts of Lysychansk.

Now, Ukrainian troops in the northeast have blitzed through dozens of towns and villages within the space of days, at times advancing 30 to 40 miles in a single day, a pace not achieved by Russia since the earliest days of the invasion.

It has the potential, at least, to change the course of the war, military experts said.

"This is a significant event," said Rob Lee, a military analyst at the Foreign Policy Research Institute. "It doesn't mean Russia will be forced out of Ukraine anytime soon. But they keep not learning lessons right, keep not doing basic things right."

Military analysts said that Ukraine had retaken more than 965 square miles of territory in the Kharkiv region and that Ukrainian troops appeared close to controlling Kupyansk, an important rail hub.

Officials and "volunteers" working for the Russian-installed occupation administration in the Kharkiv region were retreating to the Russian border and setting up temporary camps amid the Ukrainian breakthrough, and pro-Russian officials were urging residents to flee.

The leader of Russia's governing United Russia party, which runs quasi-government bodies in occupied Ukrainian territories, announced on Telegram that it moved its "volunteer detachment from Balakliya, Kupyansk, Izyum and Volchansk to the border with the Belgorod region."

"Refugees arrive here, massively leaving the Kharkiv region due to increased shelling launched by Ukrainian nationalists," the party leader, Andrei Turchak, wrote on his Telegram blog. "People are leaving with their families; there are many children. There are now more than 400 vehicles at the border."

The governor of Russia's Belgorod region, Vyacheslav Gladkov, confirmed that border checkpoints were trying to cope with the hectic influx of people fleeing the area of the Ukrainian counteroffensive.

"There are long queues of civilian cars with refugees from Ukraine," Gladkov wrote on Telegram. "Mobile food stations have already been deployed and food and water delivery to the Kharkiv side has been organized."

Just days ago, Turchak had suggested that the staged referendums Moscow had planned to carry out as a pretext for annexing occupied territories could occur on Nov. 4 to coincide with Russia's Unity Day.

Instead, Russian units have fled in disorder, giving Ukrainian soldiers a chance to hoist blue-and-yellow flags over freshly liberated town squares and take selfies with the large number of ammunition crates and military vehicles the Russians left behind.

The advances have come at a cost, according to Ukrainian commanders.

Anatoli Pryhrusha, who led a unit in the fight to take back the town of Balakliya, said in an interview that the fighting had been fierce and bloody. "It's good the Russians ran away, but we paid with a lot of lives," Pryhrusha said.

The local victories could add up to a broader strategic shift if Ukrainians continue to press their sudden advantage, analysts said.

Ukrainian troops were pushing southeast along the M03 highway, which would eventually allow them to reconnect Kharkiv, Ukraine's second-largest city, with the adjacent Donbas region, joining two key front-line theaters.

On Saturday, before the Russian retreat, the mayor of Izyum, an occupied city just 44 miles north of the Donbas city of Kramatorsk, said in an interview that Ukrainian troops had entered his city and were battling Russian troops street by street with small arms and automatic weapons.

"I'm speechless," the mayor, Valeriy Marchenko, said of the Ukrainians' rapid and unexpected progress in the region. "No one was expecting this to be so fast."

The pullout from Izyum, which Russia had used as a resupply hub for its offensive through the eastern Donbas region, marked one of the biggest setbacks for Russia since its troops rolled into Ukraine in February.

With Russian troops out of Izyum, Russia's ability to fulfill its objective of seizing the entirety of the Donbas region — the only publicly declared goal of Putin's proclaimed "special military operation" — is now in doubt, said Kirill Mikhailov, a Kyiv-based analyst with the Conflict Intelligence Team, a Russian military research group.

Izyum is an important command and supply hub for Russia's northern front and Russia's only major bridgehead on the right bank of the Donets River, he said, and losing it would eliminate an entire front — the northern front — in its efforts to conquer Donetsk.

"The bottom line is that it really improves Ukrainian chances of retaining Donetsk," he said.

Russia's confirmation of the Ukrainian advances sparked furious rebukes by its supporters on what normally would be a day of jubilant celebrations of City Day, an annual holiday, in Moscow.

"Tonight, the capital of our Motherland — the city of Moscow — will salute the surrender of Balakliya, Izyum and half of Kupyansk to the enemy with 25,000 high-altitude fireworks," Girkin wrote on Telegram. Indeed, throughout the afternoon, high-powered explosions were being felt as Russia pounded the Kharkiv region with rockets.

Girkin complained bitterly about extravagant celebrations for City Day in Moscow, where Putin visited a new martial arts center and presided over the openings of a section of new highway and a giant, 460-foot tall Ferris wheel called the Moscow Sun.

"There is nothing like that in Europe," Putin said, according to the Tass news agency. "It is very important for people to have a chance to chill out with their family and friends."

Girkin has long warned that Russia cannot win the war without a massive military mobilization, a move the Kremlin has avoided because it would be deeply unpopular to require conscriptions in the urban centers of Moscow and St. Petersburg.

"For Russia, things are only going to get worse," said Lee, the military analyst. "For Russia, this is going to cause a morale problem. There aren't any good reasons for Russia to believe it can achieve any more in Ukraine than it already has."

The Washington Post's Isababelle Khurshudyan in Kyiv, Ukraine, and Mary Ilyushina in Riga, Latvia, contributed to this report.