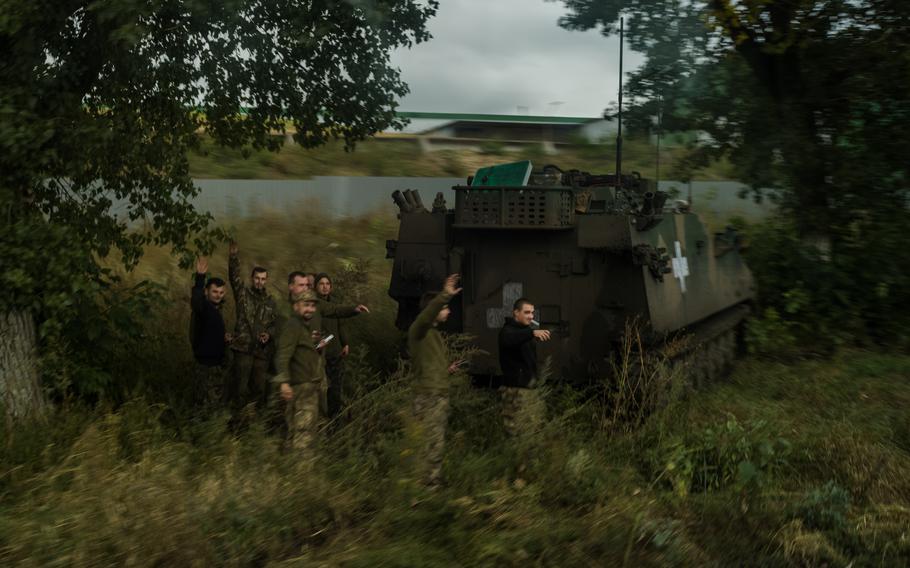 BALAKLIYA, Ukraine — Inside the dark, cramped rooms of the police station in this freshly liberated city in northeast Ukraine, prisoners held for weeks by the occupying Russian forces left behind clues about their treatment: Scratches on the walls marked how many days they were jailed, zip ties scattered on the ground and chairs lined up against a basement wall showed where they probably had been interrogated or worse.

Even as Ukrainian forces secretly prepared a counteroffensive to expel occupying Russian soldiers from the Kharkiv region, Moscow was so sure of its control on the territory that it began imposing Russian curriculum in some schools.

With that land and those schools back under the Ukrainian military’s authority after the lightning-fast advances this month, Ukraine said it had arrested Russian teachers left behind by the retreating Russian soldiers. They face up to 12 years in prison on charges of violating laws and customs of war, according to Deputy Prime Minister Iryna Vereshchuk.

Investigators are already combing through the piles of evidence those troops abandoned in their rushed departure — and questioning witnesses and victims as they begin to reconstruct incidents to build potential war crimes cases against the invaders. They’re marking locations in the police station where they suspect torture sessions took place. They’re also collecting fingerprints from empty liquor bottles there.

On Tuesday, the first day journalists were allowed to access Balakliya, the bodies of two men were exhumed from a makeshift grave in town. The investigators said Russian forces had shot and killed both last week. 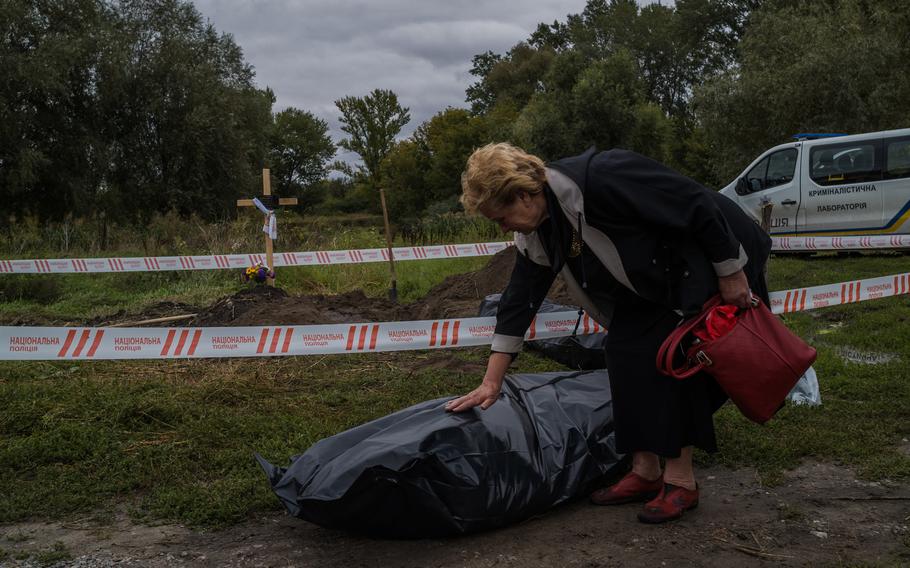 Valentyna Shepel, in the freshly liberated Balakliya, Ukraine, mourns over the exhumed body of her son Pyotr Shepel, who was killed at a checkpoint last week. Throughout the Kharkiv region, civilians who survived the Russian assault are now adjusting to their new reality. (Wojciech Grzedzinski/The Washington Post)

Moscow has acknowledged the arrests of educators but said they were Ukrainian collaborators, not Russian citizens. And in a sign of the Kremlin’s reality-bending claim of authority in the region, the head of the Russian Investigative Committee, a top law enforcement body, Tuesday ordered its own criminal probe into those teachers’ arrests, according to the department’s Telegram channel.

It all was part of the continuing reverberations of Ukraine’s successful counterattack and Russia’s swift and humiliating retreat.

With the Kremlin under pressure to explain the losses and rare public assertions in Russia that the country’s military effort has proved inadequate, President Vladimir Putin’s spokesman reiterated Tuesday that there were no plans for a general military mobilization.

“At the moment, no, it’s out of the question,” the spokesman, Dmitry Peskov, said in a conference call with reporters.

Peskov also issued a warning to critics of Putin, including supporters of the war who have pushed for a general mobilization and tougher strikes on Ukraine. The Kremlin has made it illegal to criticize the fighting, which it calls a “special military operation,” and has cracked down on dissenters.

“As for other, critical points of view, as long as they remain within the framework of the current legislation, this is pluralism. But the line is very, very thin,” Peskov said. “You have to be very careful here.”

Throughout the Kharkiv region, civilians who survived the assault are now adjusting to their new reality. They said that the fighting ramped up last week but that Russian forces soon realized they didn’t stand a chance. The sudden silence of no shelling is almost eerie, they said.

“We can sleep at night not even being afraid,” said Oleksander Hostrovykho, 29, who lives in the village of Verbivka, which Ukrainian forces retook last week. “Morning comes, and it’s just beautiful quiet.” 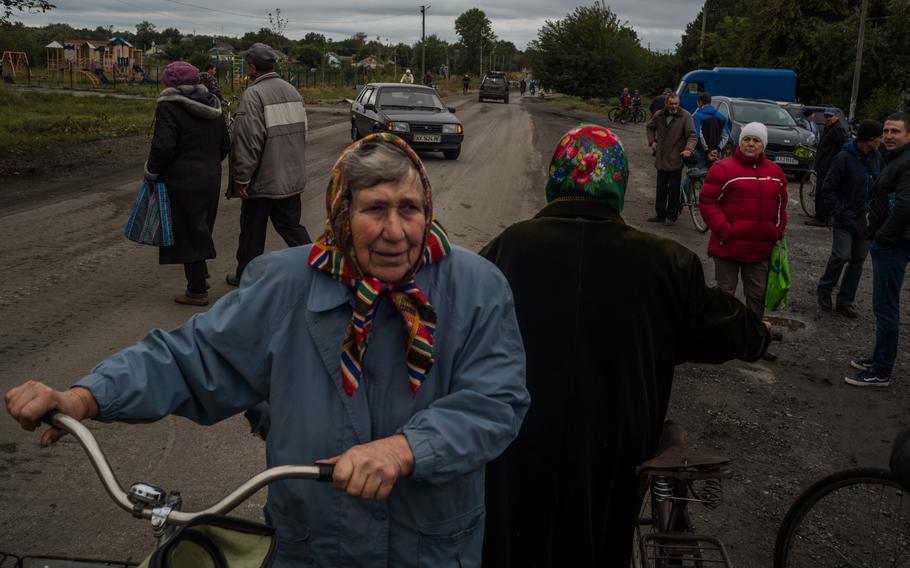 As Kyiv has reasserted authority over those liberated towns and villages, the Kremlin’s plans for annexing the territory have become increasingly clear — from shaping what young Ukrainians would learn in class, particularly about their country’s history, to preparing sham referendums.

“There was a new mayor, but I didn’t see him or know who he was,” said Oleksander Zakharov, 83, who collected food and other humanitarian assistance in Balakliya on Tuesday.

In occupied southern Ukraine, amid a slower-moving separate Ukrainian counteroffensive, Russia has delayed its plans to stage referendums as a precursor to annexation. Such elections would be illegal and not recognized by the international community.

On his way home from the aid handout, Zakharov ran into his neighbor Maryna Rudenko, 56, the director of the local hospital. She fled months ago after Russians stole all of the hospital’s supplies, accused staff of hiding members of the resistance and fired on the building — which was doubling as a civilian shelter.

Tuesday was Rudenko’s first time in town since April. She was happy to be back — despite seeing so many damaged houses and people dealing with the trauma of occupation. “I didn’t want to cooperate with the Russians,” she said. “That’s why I eventually left. I worried about my own life.”

The Ukrainian liberation of these areas has quickly revealed how unprepared Russia was for Ukraine’s advance. Its troops left behind so much equipment and weapons that military experts expect the country will now struggle even harder to capture any more ground.

When the Russians realized last week just how quickly Ukrainian forces were advancing through the region, the soldiers started running so fast “their pants were flying off,” recalled Iryna Chmil, 55, who lived through the occupation in Verbivka for months. Russian troops held her and her husband at gunpoint last week to demand the keys to their minibus so they could flee, she said. The couple readily handed them over.

Outside the village council building, where civilians said top Russian officials had stayed, a damaged sedan with the Russians’ signature “Z” emblazoned on the windshield had been abandoned. Leather boots and a military jacket were on the ground amid piles of discarded toiletries. The label on a soggy cardboard box linked it to a platoon from Russia’s 202nd Regiment.

British intelligence said Monday that Russia’s 1st Guards Tank Army, one of the most prestigious units in the country’s military, was part of the forces that withdrew from the Kharkiv region and has been “severely downgraded” after suffering “heavy casualties” earlier in the war.

“Russia’s conventional force designed to counter NATO is severely weakened,” the intelligence agency said on Twitter. “It will likely take years for Russia to rebuild this capability.”

In Verbivka, residents are still processing how quickly everything around them changed. Many spent more than a month of the occupation in their basements. When they heard drones overhead, they said, they would stand outside so that the operators could see they were civilians. At one point, they saw a shot-down Russian fighter jet falling from the sky.

At the beginning of the war, “it was very scary, we were hiding in the bomb shelter,” said 12-year-old Anton Malychyn. “But then we started to get used to it.”

The Russian troops would often go to a nearby river to wash themselves. “We would go play but keep our distance,” the boy said, wearing a hat with a Ukrainian flag patch a soldier gave him when they retook the town.

Natalya Slabudova, 72, wept tears of joy as she described in simple terms the way her life had changed in the previous week.

Khurshudyan reported from Kyiv. Wojciech Grzedzinski, and The Washington Post’s Robyn Dixon and Mary Ilyushina in Riga, Latvia, contributed to this report.