Putin says his war in Ukraine will strengthen Russia 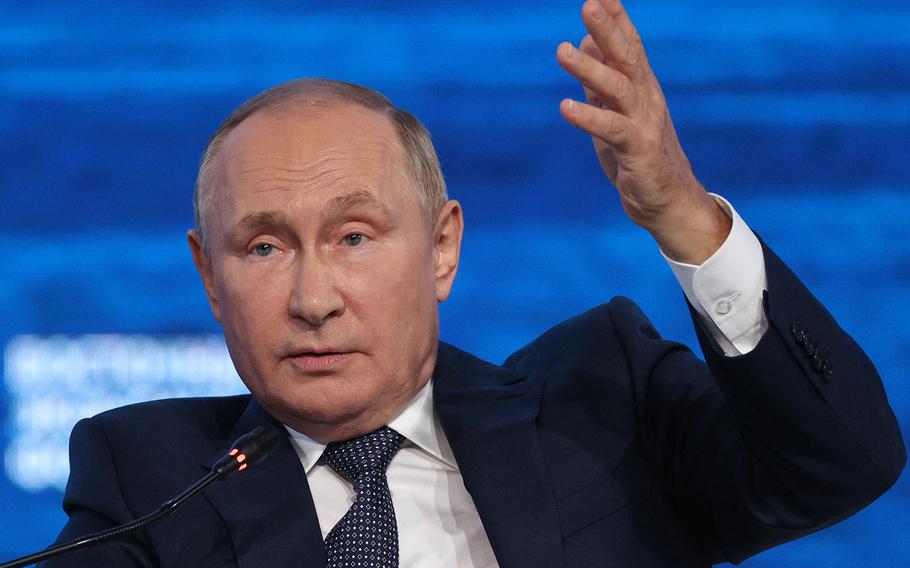 (Tribune News Service) — President Vladimir Putin said Russia will emerge stronger from his invasion of Ukraine as he lashed out at U.S. and European “sanctions fever” in response to the war.

“I’m sure that we’ve lost nothing and won’t lose anything,” Putin said at the Eastern Economic Forum in Vladivistok on Wednesday, after he was asked about the conflict in Ukraine by the panel’s moderator following a speech in which he didn’t directly mention the war. “The main thing we’ll gain is strengthening our sovereignty.”

The U.S. and its allies estimate that tens of thousands of Russian troops have been killed or wounded and huge amounts of military equipment destroyed since Putin ordered the Feb. 24 invasion that triggered the worst security crisis in Europe since World War II. Russia has also faced a barrage of international sanctions that are pushing its economy toward recession amid a stampede by foreign companies to exit the country and a ban on imports of Western technology.

The U.S. and Europe have also provided Ukraine with billions of dollars of financial and military aid, including a flow of advanced weapons that’s enabled Ukrainian forces to push back against the Russian aggression.

“The epidemic has been replaced by other challenges, also of a global nature, threatening the whole world,” Putin said, in reference to the economic impact of COVID-19. “I mean the sanctions fever of the West, its aggressive attempts to impose a model of behavior on other countries, deprive them of their sovereignty and subordinate them to their will.”

The Russian leader, who was seated at the plenary session beside Myanmar’s junta head Min Aung Hlaing, who’s sanctioned by the U.S. for alleged human rights violations, insisted it was “impossible” to isolate Russia, while adding, “We understand the risks and need to keep them in focus.”

The U.S. imposed sanctions on Myanmar’s military leaders after they took power in a coup in February 2021. Min Aung Hlaing had been sanctioned two years earlier for alleged human rights abuses by forces he commanded.

China’s top legislator, Li Zhanshu, and the prime ministers of Mongolia and Armenia also joined Putin at the annual forum that’s intended to showcase investment opportunities in Russia’s far east. The leaders of India, Malaysia and Vietnam spoke at the event by video address.

In a public show of support, Li said that China is determined to cooperate with Russia in various areas and is pleased that the Russian economy wasn’t destroyed by Western sanctions. Chinese President Xi Jinping will meet Putin next week for the first time since the war in Ukraine started, Tass reported, on what will be Xi’s first trip abroad in 2 1/2 years.

Putin lashed out at the international sanctions a day after it emerged that a confidential internal report prepared for the Russian government showed the country may face a longer and deeper recession as the impact of U.S. and European penalties spreads. The document paints a far more dire picture than Russian officials usually do in their upbeat public comments.

The Russian leader denied using energy as a “weapon” and defended the decision this week to indefinitely shut the key Nord Stream natural-gas pipeline to Europe as a consequence of European sanctions. The move led to a surge in European energy prices as governments rushed to put emergency measures in place ahead of threatened shortages in winter.