Heat pumps take off in coal-loving Poland amid Ukraine war 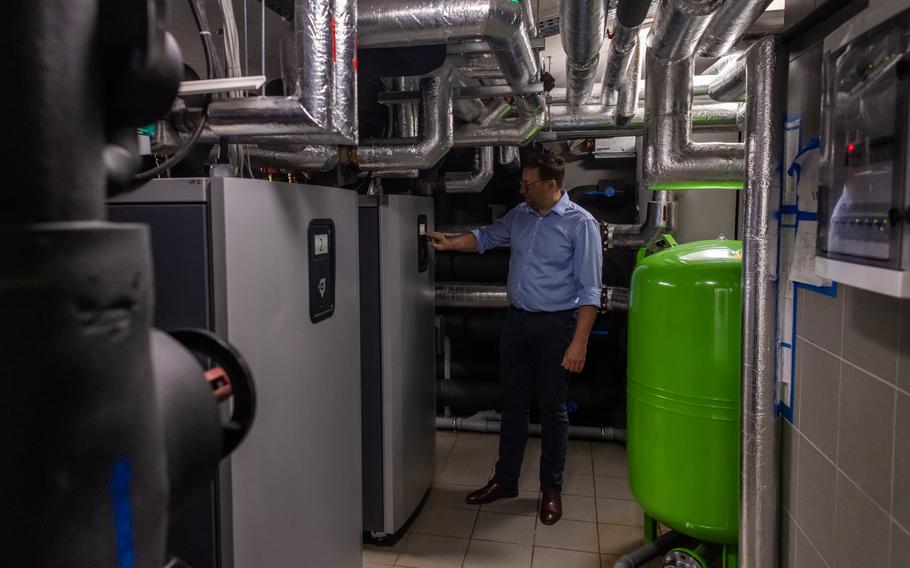 Krzysztof Januszek, who runs a heat pump installation company called Eco Synergia and is helping build the Stay Inn Hotel, says there is a six-month wait for heat pumps in Poland. (Anna Liminowicz/for The Washington Post)

WARSAW — A few weeks after Russia invaded Ukraine, Joanna Pandera, a Polish energy expert, removed the gas stovetop from her kitchen and replaced it with an electric range. She signed a contract for an electric heat pump so that she would no longer need Russian natural gas to warm her home through Poland's long winters.

And she threw a party, cooking borscht and pierogies with Ukrainian refugees to celebrate her home's newfound energy independence.

"The celebration was that we removed Russian gas," said Pandera, the director of Forum Energii, a Warsaw-based think tank that advocates for a Polish transition to renewable energy.

Pandera is working to de-Russify the energy flowing into her house, and many Poles, furious with Russia and sympathetic to Ukraine, are doing the same this year. Poland has a reputation for being the West Virginia of Europe, with its national identity tied to coal mining. But the war in Ukraine is doing what years of pushing from climate advocates could not: A growing number of Poles are embracing green measures because the shift will free them from Russian fossil fuels.

The country led Europe in installations of renewable-friendly heat pumps per capita this year, with their sales more than doubling compared to a year ago. Just last year, Polish policymakers aimed to install 10 gigawatts of solar panels by 2030 — a goal it has already surpassed. 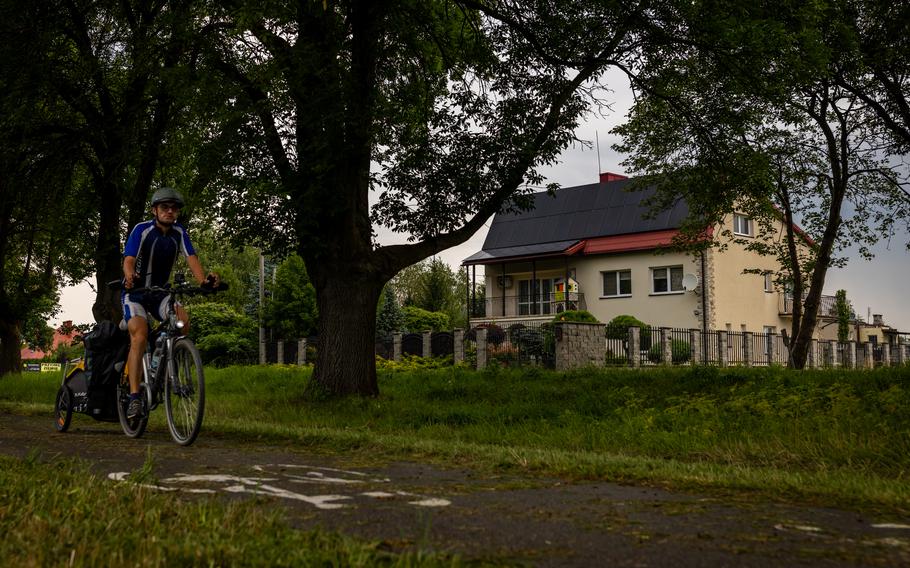 Solar panels cover the roof of a home in Brwinow, Poland, about 15 miles from Warsaw. (Anna Liminowicz/for The Washington Post)

Poland's national leaders, who continue to praise the virtues of their domestic coal, still won't win many environmental awards. But Polish citizens are increasingly going in a new direction.

"We are doing everything we can to help our citizens be more energy independent," said Magdalena Mlochowska, the director of climate efforts for the Warsaw city government, which is run by the country's main opposition party. "In Poland the biggest fear is to have no gas because of [Russian President Vladimir] Putin. People have started to be afraid of gas as their only source of heat."

Before the conflict, Poland was working to switch from old-fashioned coal-fired boilers to gas boilers for heat and hot water. The change improved air quality and reduced carbon emissions, but did nothing to cut reliance on Russian energy.

Now Europe has banned purchases of Russian coal and restricted Russian gas in a bid to starve the Russian economy of funds for the war effort. And Russia itself is also reducing gas shipments — including a full halt to Poland, and, on Friday, a cutoff of Nord Stream 1, the main gas pipeline to Germany — in an apparent bid to create shortages and pressure European leaders to cut their support for Ukraine.

That means there is less coal and gas to go around, and what is left is far more expensive. Coal in Poland now costs triple what it did last year, and the wholesale price of natural gas in Europe is 10 times what it was a year ago.

The crisis has left Poles reeling — and realizing they depended on Russian energy far more than they thought. Poland no longer produces much of the harder, cleaner-burning coal that is best for home use — it burns most of its domestic coal in its power plants. Since about 40 percent of the coal burned in Polish homes had been coming from Russia, the country now faces the strange prospect that it could run out of coal this winter, leaving citizens shivering.

Polish leaders have always said that coal will be domestic, cheap and reliable, Pandera said. "And now we see it's Russian coal, it's expensive and it might not be there," she said.

"Everybody is waiting for winter," Pandera said. "It will certainly be dramatic. They will not be able to heat their homes either because of the physical lack of coal or because they can't afford it. People are going to be sitting in cold homes."

European Union leaders agreed in July to cut their use of natural gas by approximately 15 percent — about what they think they need to avoid running out during the cold months of the year. Before the war, Russia supplied about half of Poland's gas, although the government had been working to build pipelines and other infrastructure to make it easier to get supplies from other countries. 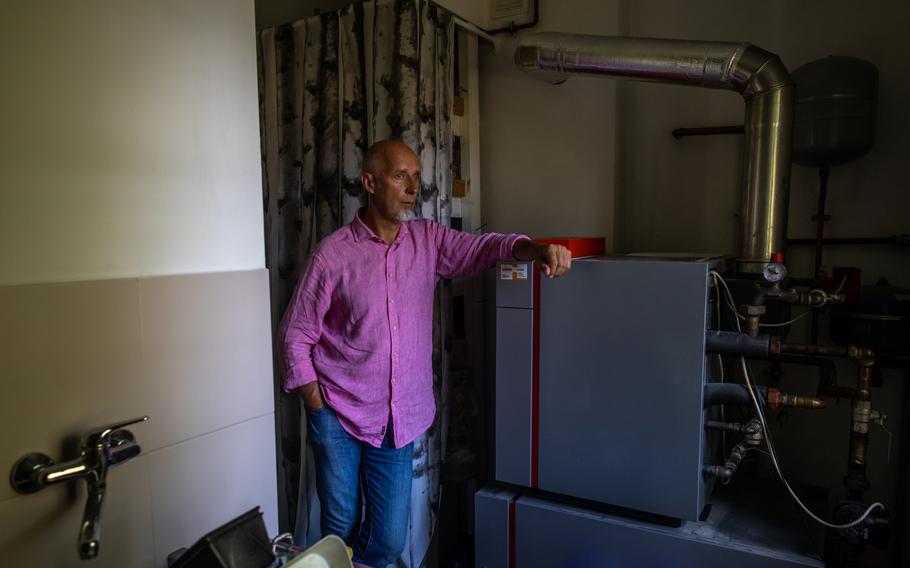 Piotr Siergiej, the spokesman for environmental advocacy group Polish Smog Alert, awaits delivery of his new heat pump. He says “the paradigm in Poland shifted, but the government doesn’t realize it yet.” (Anna Liminowicz/for The Washington Post)

Until this spring, Danuta Zdunczyk had been heating her house just outside Warsaw with coal — an arduous process that required regular trips to refill the boiler with the black stuff.

"I wanted to switch into heat pumps a long time ago, but after Russia's invasion of Ukraine it just speeded things up," said Zdunczyk, who works for a pharmaceutical company.

"The whole situation really made people more aware of how dangerous this system was that we've been relying on," she said. "I'm very happy that we as a country won't be dependent on Russia and that Poland won't be putting money into Russia's pocket for its war in Ukraine."

Heat pumps run on electricity, so they appeal to climate advocates because they can run on renewable energy. Installers say their phones have been ringing off the hook.

Krzysztof Januszek, who runs a heat pump installation company called Eco Synergia, said that interest in his technology boomed within days of Russian tanks rolling into Ukraine on Feb. 24.

"It started in the beginning of March, right after the war started," he said. Poles know the changes to energy supplies are likely permanent, he said, meaning that they are willing to make bigger investments to adapt to the new situation in which it is better to avoid gas and to use as little energy as possible. Waiting times for heat pumps in Poland are now six months, he said.

"We will leave Russian gas. It won't come back," he said. "So no matter what, the energy prices are going to be more expensive." 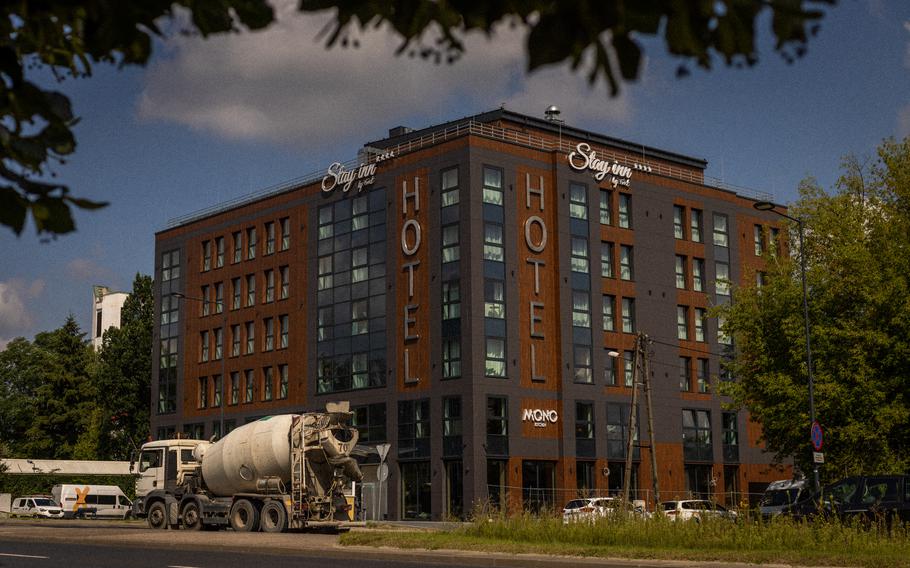 The owners of Stay Inn Hotel, which is under construction near Warsaw’s main airport, say it will be Poland’s first hotel heated and cooled exclusively by heat pumps. (Anna Liminowicz/for The Washington Post)

Right now, Januszek is helping to build the Stay Inn Hotel, which is under construction near Warsaw's main airport. Its owners believe it will be Poland's first hotel heated and cooled exclusively by heat pumps. The warmth will come from 28 narrow wells that Januszek drilled down to 165 yards underneath the building. Solar panels on the roof will help cover some of the energy needs. Opening is set for late September.

In the basement of the hotel on a recent morning, while construction workers put the finishing touches on the kitchen and the entrance areas, the heat pump was already at work, as big gray boxes about 5 1/2 feet high circulated water in and out of the boreholes. The pump will heat the hotel's pool and spa, too.

Even before the war, the hotel's owner wanted to build in a climate-friendly manner. Now, though, it makes even better business sense, said a representative from Cantare, the company that is building the hotel.

"We are worried about the lack of gas," said Kazimierz Federak, who is overseeing construction at the hotel. He said the company was already receiving notes from Poland's state-controlled oil and gas company about possibly limiting gas use this winter.

Cantare is trying to switch to heat pumps at its other properties as quickly as possible to avoid gas price increases, Federak said. With more costly fossil fuels, he said that the heat pumps pay for their higher initial costs within three or four years — more than twice as fast compared to before the war.

"Frankly speaking there's no way to limit the use of gas," he said. "It's hard to choose what to turn off."

For all the efforts among ordinary Poles, many Polish climate advocates say that the national government remains tethered to coal.

"The government still thinks that coal is the baseline of Polish energy," said Piotr Siergiej, the spokesman for Polish Smog Alert, an environmental advocacy group. "But Polish society is 180 degrees different. Polish society is going into cheaper energy, and the cheaper energy is renewable energy. The paradigm in Poland shifted, but the government doesn't realize it yet."

The Polish government still supports fossil fuels, even as it's started to provide modest incentives to shift to cleaner energy. Since 2018, the Polish government has offered citizens up to $6,700 to switch from coal boilers to less dirty forms of heat. In July it upped the potential assistance to about $16,500. And last month it also devoted at least $430 million toward local energy efficiency projects. 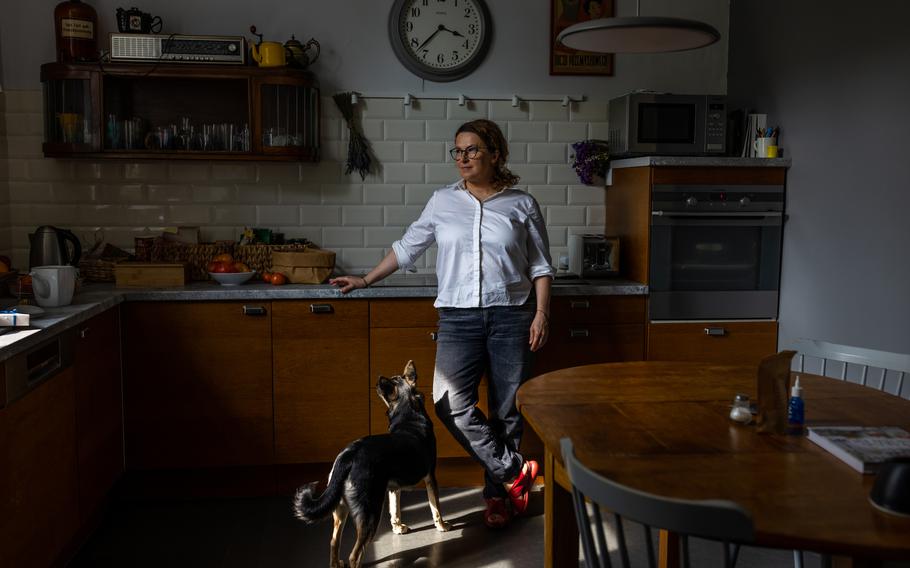 Joanna Pandera, a Polish energy expert, swapped her gas stovetop for an electric range and then celebrated her independence from Russian energy by cooking for Ukrainian refugees. (Anna Liminowicz/for The Washington Post)

But in recent weeks it also announced one-off subsidies of up to $630 for households that haven't made the changeover, prompting climate advocates to say that the government was rewarding the use of fossil fuels. And Polish Prime Minister Mateusz Morawiecki directed state businesses to buy 4.5 million metric tons of coal to prepare for the winter.

Other policy changes that could make a difference — such as making it easier to build onshore wind power — are still mired in discussions in the Polish Parliament.

Some analysts fear that with prices so high, Poland's climate outlook could get worse before it gets better. Not only has the government made it easier to burn dirty coal for heat this winter, some fear that Poles could turn to burning wood or trash in their heating stoves, making Poland's air even more unbreathable. It already ranks among the dirtiest in Europe.

"I am sometimes a bit perplexed as to where Polish energy politics is headed in these times," said Monika Morawiecka, a longtime Polish energy executive who is now a senior adviser at the Regulatory Assistance Project, a U.S.-based group that advocates for cleaner energy.

Polish policymakers say they are moving as quickly as they can.

"We have to rely on what is there in the short run, but also accelerate renewables," said Deputy Climate Minister Adam Guibourge-Czetwertynski. "The changes we see in Poland are happening much faster than people outside Poland think."

The Washington Post's Dariusz Kalan contributed to this report.