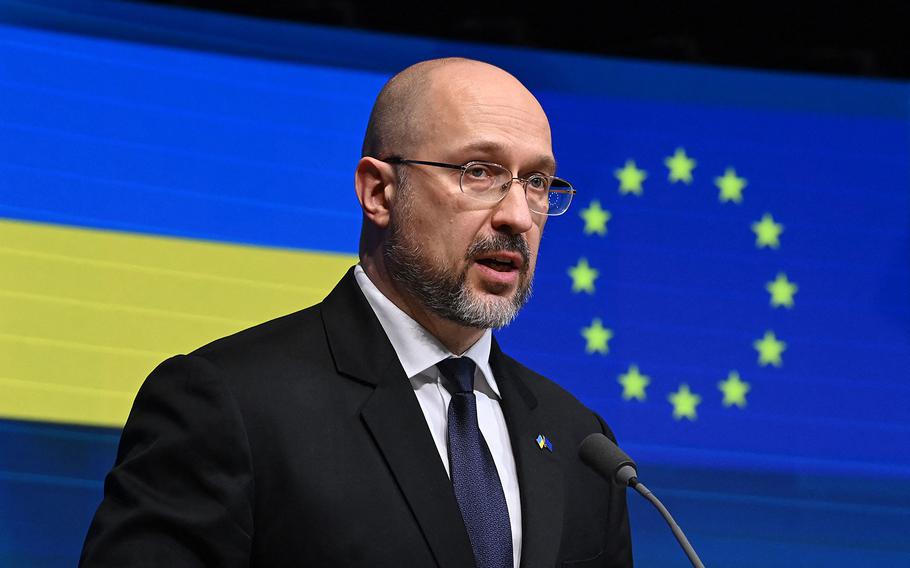 Prime Minister of Ukraine Denys Shmyhal speaks during a press conference during an EU-Ukraine Association Council meeting at the EU headquarters in Brussels on Sept. 5, 2022. (John Thys/AFP via Getty Images/TNS)

“We understand that time will play to Russia’s side so we, all together with our allies, with our partners” should do our best “to finish this war as soon as possible,” Shmyhal told Bloomberg TV in an interview in Brussels. Russia “is interested to go for longer time, to take more time,” which is “a challenge for all of us,” he added.

Ukraine is scoring some military successes in its southern regions as well as in the north, Shmyhal said without elaborating, voicing the hope that the nation will be able to liberate the whole of its territory within internationally recognized borders, including Crimea.

Against a backdrop of leaders rushing to resolve a deepening energy crisis, Shmyhal said that Ukraine is fulfilling all its gas transit obligations toward European customers despite the war, and could pump five times more than the current volume. Ukraine is also ready to boost electricity flows even as its ability to export power hinges on whether the country can “save” the Zaporizhzhia nuclear plant.

The plant, Europe’s largest, has been using one of its production units for cooling after a power link to the country’s energy system was cut off again Monday, according to Shmyhal. This can’t go on for long as repairs are needed, he said, calling for a Ukraine-controlled peace-making mission to the site.

Fighting near the plant makes it impossible to carry out repairs at the moment, Ukrainian energy minister Herman Halushchenko said earlier on Facebook.

The Ukrainian military has been making “verifiable progress” in its counteroffensive, advancing in several directions and securing territory in the east and south, the Institute for the Study of War said Sept. 4.

With about a fifth of the country’s territory occupied by Russian President Vladimir Putin’s troops, Ukraine has been increasingly using high-precision weapons supplied by its Western partners to target Russian command posts, munitions depots and military logistics behind the front lines.