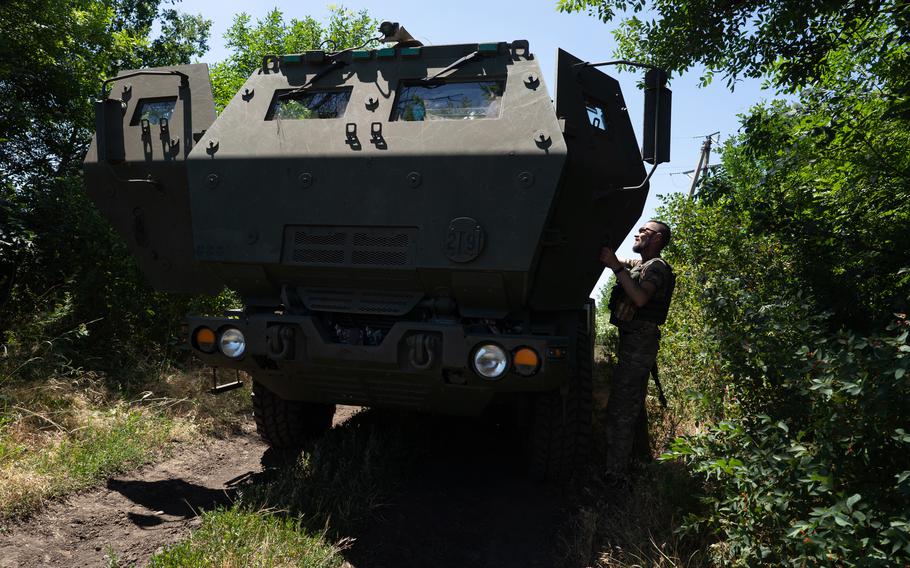 A Ukrainian serviceman opens the door to a HIMARS vehicle in Eastern Ukraine on July 1, 2022. (Anastasia Vlasova/for The Washington POst)

NEAR IZYUM, Ukraine — If only they had more, and more sophisticated, weapons from the West, Ukrainian officials often tell their American counterparts and anyone else who will listen, they could make short work of Russian invaders. Last month’s arrival of the first of what are now a dozen U.S. multiple-launch precision rocket systems, known as HIMARS, has already been a game changer, soldiers here said this week.

Since a recent HIMARS strike on an enemy ammunition depot in Izyum, located southeast of Ukraine’s second-largest city Kharkiv, Russian shelling has been “10 times less” than before, said Bohdan Dmytruk, a battalion commander in Ukraine’s 93rd Mechanized Brigade.

Yet the Biden administration has parceled out the rocket systems slowly, watching how the Ukrainians handle them — and how the Russians respond. To fighters on the ground, that makes little sense at a crucial moment in the war.

In his battalion alone, Dmytruk said, the number of killed and injured has fallen dramatically compared to when his soldiers moved to this part of the front line three months ago. “We have about one guy suffer a concussion every week now. Before the HIMARS hit, it was about two to three a day because of the intensity of the shelling.”

Dmytruk and soldiers in the area attributed the drop-off in what was near-constant bombardment to the Russians’ need to conserve shells after the depot was destroyed, and their fear that firing their own artillery will alert the far more accurate and agile HIMARS to their positions.

“They have no idea where it is,” Dmytruk said of the wheeled launch vehicle and its four-man crew, which can fire and drive away at up to 60 miles per hour within two minutes. Already, he said, the Russians are likely adjusting to the new weapons by moving their supplies deeper into Russian-held territory beyond the 50-mile HIMAR range.

The administration announced Friday that it would send four additional HIMARS — High Mobility Artillery Rocket Systems — to Ukraine, bringing the total to 16. Britain and Germany also have each sent or pledged three similar multiple-launch long-range systems. But the Ukrainians and some other close observers of the conflict say the need is far greater and immediate.

Ukrainian government and military officials have said at various times that they need dozens, hundreds or even thousands of HIMARS.

“For an effective counteroffensive, we need at least 100,” with longer-range munition than what has been supplied, Ukrainian Defense Minister Oleksii Reznikov said Tuesday in a video appearance at the Washington-based Atlantic Council. “That would be a game changer.”

The provision of security assistance to Ukraine has become a massive operation, involving more than 50 countries. The United States leads the effort, with the most money spent and weapons sent — $8.2 billion worth since the beginning of the administration, with billions more expected — although others have collectively provided billions worth of light and heavy military equipment. To Washington, confronting Russia with a large and united global front is worth the occasional headaches of coordinating donations from around the world, ensuring equipment is in working order and matches needs on the ground, and seeing that it gets to the right place inside Ukraine.

The nerve center of the operation is a large, secure room at the U.S. European Command in Stuttgart, Germany. Cables taped along the floor and folding tables lined with laptops gave it a makeshift atmosphere during a reporter’s recent visit, with a World War II allied vibe as uniformed officers from many countries traded documents, pointed at screens filled with lists and graphs, and consulted on telephones in various languages.

The to-do list is complex. Norwegian tanks have needed new barrels to match donated ammunition from somewhere else. Aging Spanish tanks, made in Germany, required refurbishment after years in storage. Shells and spare parts for Ukraine’s own Soviet-era artillery are being solicited from other former U.S.S.R. states. There are logistics routes to be plotted and, always, new Ukrainian requests to consider. 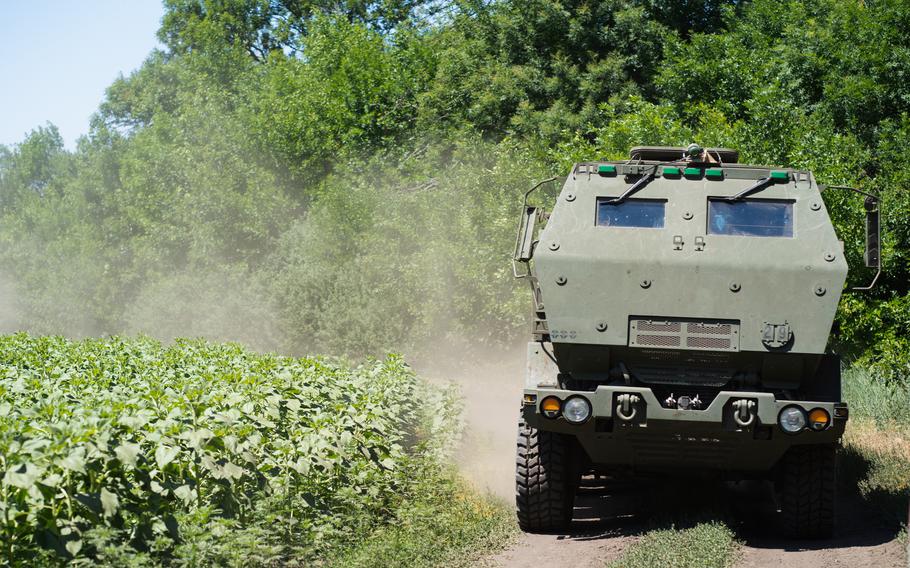 A HIMARS vehicle drives on the road in Eastern Ukraine on July 1, 2022. (Anastasia Vlasova/for The Washington Post)

Most attention has focused on big-ticket items that only the United States and a few of its NATO allies have been able or willing to provide. From antitank weapons to air defense to howitzers and now HIMARS, each escalation has required consideration by individual governments of what is possible and advisable.

For some critics, and many Ukrainians, the steps in that process do not always match the urgency of the situation, especially as Russia has said it plans to annex parts of occupied southern Ukraine and made slow but steady progress expanding its hold on the east.

Some argue the objective should be to put Ukraine in a better position for cease-fire negotiations to keep Russia from conquering more territory. Others say the goal of the ally-provided aid, now that the Ukrainians have shown their fighting mettle, should be arming them for a counteroffensive to push the Russians back across their own border.

“There’s a window of opportunity that’s narrowing rather rapidly to change the trajectory of this war. But right now, I just don’t hear the urgency to do so,” said Alina Polyakova, president and chief executive of the Center for European Policy Analysis. She defined that window as within the next four to six months.

U.S. and allied incrementalism — the measured provision of more and better equipment after, instead of before, Russians have advanced in a particular battlespace — will make it ever-harder to dislodge established Russian facts on the ground, Polyakova and others said.

U.S. administration and military officials have said that one of their top concerns is not provoking Russia into a direct conflict with NATO, even as Ukraine points out that Russia invaded their country without provocation. The range of the ammunition the United States is providing for the HIMARS will not reach across the occupied east to Russia itself from Ukrainian front lines, but it allows what Gen. Mark Milley, chairman of the Joint Chiefs of Staff, speaking at a Wednesday news conference with Defense Secretary Lloyd Austin, called an “echelon of fires,” with shorter-range weapons, across various distances.

At the same time, Austin indicated, such sophisticated weapons don’t just come out of the box ready to use. So far, he said, 200 Ukrainians have been trained outside the country on using and maintaining the HIMARS.

“It’s not good enough just to provide a piece of equipment,” Austin said. “We need to have that piece of gear plus spare parts, plus tools to repair it.”

The HIMARS have been used to destroy Russian command posts, ammunition depots and other logistics hubs. In the southern region of Kherson, an area occupied by Russia since the first days of the war, recent strikes have targeted Antonovskiy Bridge, a key supply route that connects the Crimean Peninsula, where Russia has a military base, to their troops in Kherson.

The HIMARS have been so effective that Russian Defense Minister Sergei Shoigu has ordered commanders to prioritize them for targeting. Moscow is hoping to use drones — likely bought from Iran, according to U.S. officials — to find and destroy the HIMARS. Russia has already claimed to have hit at least four of the weapons systems. Kuzia, the commander of the unit, gets inside the HIMARS vehicle in Eastern Ukraine on July 1, 2022. (Anastasia Vlasova/for The Washington Post)

But “we haven’t lost a single HIMARS, despite what the Russians have claimed,” Kyrylo Budanov, Ukraine’s military intelligence chief, said in an interview.

The HIMARS can also fire a munition called the Army Tactical Missile System (ATACMS) with a range of nearly 186 miles, nearly quadruple what they are now supplied with, but the Pentagon has withheld those out of concern the missiles might land in Russia itself. The restriction has frustrated Ukrainian officials, who described it as paternalistic.

In a battle now largely conducted with artillery at distances where troops of opposite sides rarely see each other, the longer-range missiles would also allow Ukrainian forces to move their HIMARS further back from the front lines, better insulating them from enemy detection.

“The sooner we receive them, the more lives of our soldiers we will save, and the sooner we will start the counteroffensive operation,” Yehor Cherniev, a member of the Ukrainian parliament, said in a statement. “It is unfortunate that we have to spend weeks and months to convince our partners.”

In late May, as the decision to provide HIMARS was being made, President Joe Biden told reporters that “we’re not going to send to Ukraine rocket systems that can strike into Russia.” At the news conference, Austin and Milley sidestepped questions about whether the Pentagon would supply the ATACMS. “We think what they’re working with [now] is giving them a lot of capability,” Milley said.

The Americans have said they want to see how the Ukrainians use and absorb particular capabilities into their arsenal before they send more advanced weaponry, even if potential delays cost lives.

From Ukraine’s perspective, that decision process is “like in a computer game,” Foreign Minister Dmytro Kuleba said in an interview. “You have to unlock the next level, but before you do it, you usually die a couple of times. The problem with real life is that you can’t die multiple times before you get to the next level.”

Another potential U.S. concern is the availability of the weapons themselves. There are likely between 1,000 and 3,000 ATACMS in U.S. stocks, said Chris Dougherty, a senior defense fellow at the Center for a New American Security. They’re the oldest missiles in Army inventory, according to the service, and are periodically tested to ensure viability. The replacement munition, which can fire even further, is not yet in production.

The Defense Department said in 2020 that the United States had a supply of 410 HIMARS, but the Pentagon declined to produce a current figure. Stockpiles are “internal to DoD,” said spokesperson Jessica Maxwell.

Budanov, Ukraine’s military intelligence chief, said the longest-range system currently in his country’s arsenal is the Tochka-U, a Soviet-era system with a maximum distance of about 75 miles, and “very few of them are left.”

But for now, he said, they have the HIMARS. “We’ll fight with these,” he said. “If we get the longer-range [munitions], we’ll use those. And the Russians know that either way, it’s the end for them with these weapons.”

DeYoung, Horton and Demirjian reported from Washington. The Washington Post’s Dan Lamothe contributed to this report.