His city occupied, a Ukrainian mayor fights to save his community Mykola Khanatov, mayor of the city of Popasna, is seen in Dnipro, Ukraine, on July 9, 2022. (Wojciech Grzedzinski/for The Washington Post)

NOVOMOSKOVSK, Ukraine — Mykola Khanatov is a mayor without a city.

He remembers the last time he saw his hometown of Popasna, in Ukraine’s eastern Luhansk region. It was Orthodox Easter and the Russians were at the gates. He was inside his fourth-story apartment when a torrent of shells landed nearby.

The 41-year-old took off down the stairs, squeezing through the bars of a locked security door to reach the basement.

There, he huddled with his neighbors for the better part of an hour. After weeks of intense bombardment, residents had learned the rhythm of the Russian firing teams — a pause in the shelling meant he had a 10-minute head start before the soldiers reloaded.

He recalls sprinting to his van and racing through the back roads and alleyways that led west, hoping to stay out of sight of the Russian drones used to identify artillery targets. The city he knew by heart, now scarred and disfigured, rushed by in a blur.

Resigned to the loss of his home, he only hoped to make it out alive. “I’ve never prayed so hard for my own life,” he said. 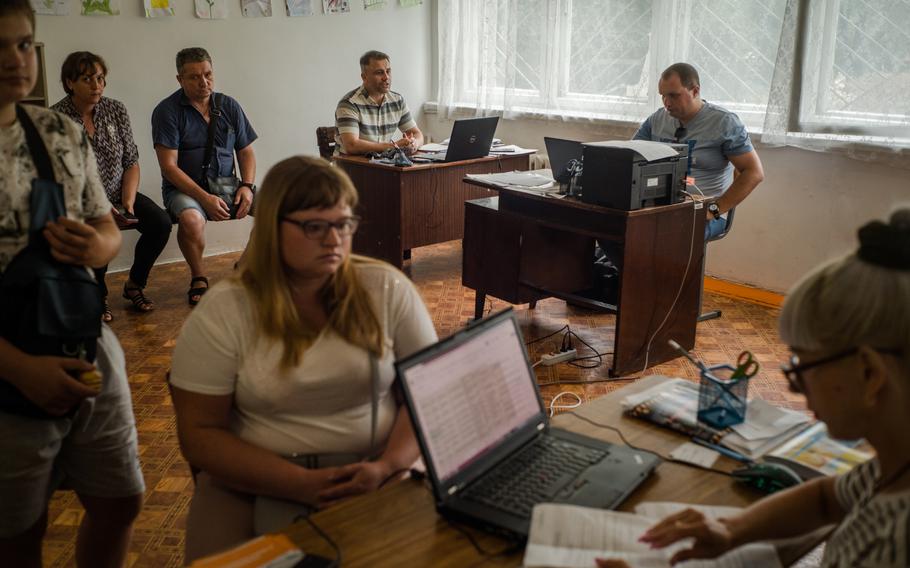 Mykola Khanatov, back corner, and other officials work in their remote headquarters in Novomoskovsk, Ukraine. (Wojciech Grzedzinski/for The Washington Post)

Now in exile, Khanatov, like dozens of other Ukrainian mayors in territories occupied by Russian forces, is determined to keep his community together. He and other city officials have begun the painstaking process of trying to rebuild the administration they left behind in Popasna.

Their headquarters is a three-car garage, 170 miles west in the town of Novomoskovsk. At the school next door, the mayor works out of a former classroom, the walls lined with pictures drawn by students with messages reading “Lets go Ukraine” and “Think happy” scribbled in crayon.

Their new city planning meetings are spent organizing humanitarian deliveries to exhausted families from Popasna and helping others navigate the bureaucracy of a government at war. With most of the city’s 20,000 residents displaced, and those still there facing increasingly dire conditions, the need is growing.

Before the war, Khanatov had a staff of nearly 100 people, who helped oversee the city’s bus drivers, teachers, accountants and municipal workers. Only 15 members of his administration are still with him at the makeshift hub, where they take turns fielding phone calls and messages on social media from their former neighbors, who need help with pensions, birth certificates, food and housing.

“It’s moral support, to let people know their leaders didn’t abandon them,” said Khanatov. “Right now, there are people born and dying in the occupied territory.”

When not registering recent arrivals — about 4,000 have made their way to Novomoskovsk — the team loads boxes with relief supplies, which are driven at least once a week to families sheltering in the front-line city of Bakhmut. The people of Popasna have lived with the sorrow and chaos of war for nearly a decade. A Moscow-backed separatist uprising in 2014 displaced tens of thousands in eastern Ukraine and destroyed infrastructure across the region.

Kyiv made a concerted effort to support those who stayed, building new schools, repairing old roads and improving government services, Khanatov said. The improvements were incremental, but stark when compared with the poor living conditions in the occupied territories next door, which some Ukrainians compare to North Korea.

Over the years, locals grew accustomed to the presence of Ukrainian troops in their front-line town, but the mood began to shift in January, as officials warned of a Russian invasion. Days after the start of the war on Feb. 24, many were hesitant to leave their homes — the memories of displacement from 2014 still lingered. Trains departing for Kyiv, the capital, would wait 12 hours to evacuate 10 passengers. Some fled, only to return days later, according to the mayor.

On March 2, the shelling began. The city held out for 68 days, until Russian forces finally overwhelmed its depleted defensive positions. Khanatov said hundreds of residents were killed in the fighting, and the city ran out of plaques for gravestones.

In the early days of the invasion, officials focused on evacuating the thousands of residents trapped in the city and providing humanitarian aid to those who refused to leave.

The administration, working with the heads of the public utilities, the fire department and the police, would start the day assessing the damage overnight, sending maintenance crews to make hasty repairs to shelled power and water lines. “They’d bomb at night and in the morning we’d start all over again,” the mayor said.

Officials began quietly removing boxes of government documents, stamps and computers to their homes, knowing their days in Popasna were numbered. Afraid of stoking panic among residents that they were being abandoned, Khanatov instructed the city accountant to take home one box every night until the office was cleared.

Soon, bodies piled up in the streets. The stench of death was everywhere.

“Taking people out is good, bringing humanitarian aid is good, but dead bodies were scattered across our entire city and they had to be buried,” said Khanatov. “Emotionally, it was a constant struggle, but I had to overcome it.” The mayor found a truck to collect the remains. A local funeral parlor buried them.

The city’s top officials would gather regularly in person before their meeting location was struck twice by the Russians. “Everyone knew what needed to be done,” said Khanatov.

As Russian forces closed in on the city, he gathered the department heads of Popasna a final time. “Whoever wants to leave can leave, whoever wants to stay can stay,” he told them. “I won’t tell you what to do. You’ve been stronger and braver than I could have ever asked of you. I’ll accept your decision.”

Many, including the mayor, chose to relocate to the nearby city of Bakhmut, where they continued carrying out their duties, then moved again to Novomoskovsk as the fighting edged closer.

Many residents refused to leave, said Khanatov, fearing they wouldn’t survive the journey. Others preferred to wait for the occupation. Filishtinskyi stopped visiting one bomb shelter after those inside expressed sympathy for the invading Russian forces. “For eight years, they’ve seen there is no future there and still they were waiting for the Russian world,” he said.

But Khanatov was struck by the bravery of everyday Ukrainians, willing to sacrifice their lives to save his city. “It’s the young people, the good ones, that are most dedicated to helping others,” he said.

April 29 was the last time anyone would be able to enter Popasna from Ukrainian-held territory. Days later, the governor of Luhansk confirmed the city had fallen.

“When the Russian soldiers arrived, they must have understood that the people of the city were pretty well off — even with the city in ruins,” said Khanatov.

In the months since, some officials have moved on — the former chief of police accepted a position in another town, as did the head of the fire department. The mayor is trying to hold his government in exile together. Khanatov shares a spartan one-bedroom apartment with his wife and 17-year-old daughter, furnished with the few belongings they were able to retrieve from their home. His wife, Rimma, suffers from suffocating panic attacks.

“When we return to see the destruction with our own eyes, there will be a second wave of pain,” said Rimma.

“There is still so much to overcome,” she lamented, weeping silently. “We built everything in Popasna.”

Khanatov tries to bury his feelings in his work. “From time to time, it catches up to me,” he conceded. “I was scared, but this fear emboldened me.”

He is sustained by his memories of Popasna, and the hope it will one day be free.

“We are all still hoping to go back someday,” he said.

The Washington Post’s Anastacia Galouchka and Wojciech Grzedzinski contributed to this report.