Aleksey Semenenko on violin and Antonii Baryshevskyi on piano play together during “The Unplayed Concert” live-streamed from the Lviv National Philharmonic Hall on March 24, 2022, in Lviv, Ukraine. (Joe Raedle, Getty Images/TNS)

The 19th century Romantic composer, beloved worldwide for "Swan Lake" and "The Nutcracker," is one of scores of Russian cultural, political and historical figures whose lives and works are immortalized in place names and statuary in cities and towns across Ukraine. Streets and Metro stations bear the names of Tolstoy and Chekhov; monuments to Russian Empress Catherine II dot broad urban plazas and leafy public parks.

But nearly five months into Moscow's full-scale invasion — a brutal onslaught that has left entire cities disfigured by bombardment, killed and maimed thousands of civilians and soldiers, and forced millions to flee ruined homes — such everyday reminders of an empire's imprint have become, for many Ukrainians, an unbearable affront.

"Right now, Russian culture is toxic," said Bohdan Tykholoz, a Ukrainian academic and author who directs a literary museum in the western city of Lviv.

Within weeks of the Feb. 24 invasion, efforts began to rename dozens of Ukrainian sites. In the midst of war's upheaval and lives' upendings, these ad hoc efforts gradually coalesced into a creaky bureaucratic structure: the creation of commissions and advisory boards, at both municipal and national levels, to wrestle with the question of what nomenclature to strip away — and what to put in its place.

In Lviv, long considered a cultural capital, city authorities are weighing or have called for name changes for more than 50 streets, from winding lanes to major thoroughfares. One of those is tree-lined Tchaikovsky Street, a gently curving cobblestoned expanse stretching for a few long blocks in the city center.

A McDonald's restaurant marks the turnoff into the roadway, but the street nonetheless exudes a quiet elegance, with ornate balustrades adorning apartment houses, artful boutique window displays, stained-glass signage and a trendy cafe and wine market.

At the street's midpoint is the concert hall of the Lviv National Philharmonic, a graceful honey-colored edifice where regular performances have resumed even though dozens of musicians and support staff have been displaced by war, or deployed to the front.

Once, the wild and melancholy strains of a Tchaikovsky concerto could lift the heart of Volodymyr Syvokhip, who at 57 has been the symphony's director for the last 17 years. But not now.

"It has to be rejected," he said of the Russian composer's oeuvre, once a repertory staple. There might be some room for reassessment later, he allowed — "after our victory."

Tchaikovsky, though, is a complicated case in point. Although Russian-born, he had family roots in Ukraine; his great-grandfather was a Zaporozhian Cossack, one in a fighting force in what is now east-central Ukraine. Before being Russianized, the original family name was Chaika, meaning "seagull." Scholars point to the likely influence of traditional Ukrainian folk melodies on Tchaikovsky's works.

In the capital, Kyiv, where the National Music Academy is named after the composer, controversy erupted over a move to drop his name, branded by critics as an "emblem of Russian imperial chauvinism." That prompted strong pushback from some instructors who signed a letter declaring that Tchaikovsky's free-spirited musical gifts transcended nationality.

All this might seem secondary in a country where each day yields up wrenching accounts of death and destruction. In recent weeks, Russian missile strikes have pummeled towns and cities far from the eastern and southern front lines, killing dozens of people in what Ukrainian officials say is a systematic campaign of terror against civilians. Moscow denies deliberately aiming at nonmilitary targets.

Even against such a backdrop, though, it would be difficult to overstate the role of cultural pride in the country's wartime zeitgeist. Russian President Vladimir Putin presaged the invasion by declaring that Ukraine does not even exist as a nation. Outrage in the face of the Russian leader's sneering dismissiveness helped fuel a Ukrainian military resistance that has so far staved off a far more powerful foe, though at immense cost.

Across the country, that sense of solidarity often finds expression in cultural touchstones: statues of revered Ukrainian figures painstakingly sandbagged; a crowd of onlookers spontaneously joining street buskers in an upbeat rendition of the national anthem; treasured works by Ukrainian artists tucked away deep in underground vaults for safekeeping; a premium placed on the reopening of landmark venues like the famed opera house in the Black Sea port of Odesa.

Ukraine, which became independent after the Soviet Union disintegrated in 1991, has undergone previous waves of renaming and reclamation, including the toppling of monuments dedicated to Communist and Soviet figures. More such counter-commemorations followed what Ukrainians consider the start of the current war, eight years ago, when Russia seized the Crimean peninsula and fomented a separatist battle in the industrial east. 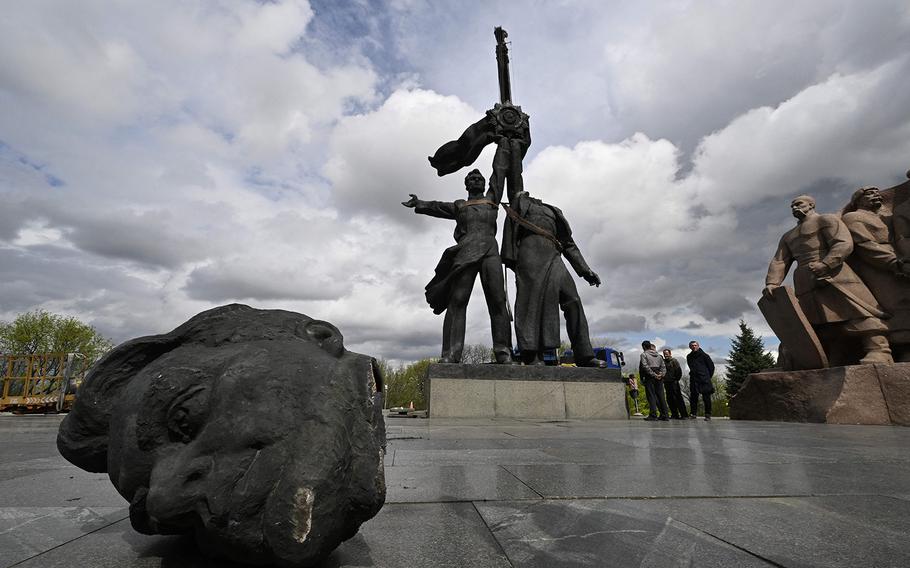 Workers dismantle the Soviet monument to Ukraine-Russia friendship in Kyiv on April 26, 2022, amid the Russian invasion of Ukraine. (Genya Savilov, AFP via Getty Images/TNS)

But remembrance and history are plaited together in complex and painful ways, with meaning to be derived even from harrowing past associations, said Sofia Dyak, a historian who sits on a national advisory board set up by the Ministry of Culture. She spends hours in staticky, sometimes-contentious Zoom meetings with colleagues from around the country about name changes, part of what she and other historians see as a larger process of "decolonization."

"For myself, personally, I might not push to have a street that was called after Chekhov renamed," she said. "But I wouldn't cry over it, either — instead, I'd cry over someone killed in this war."

Ukrainians, highly attuned to the drumbeat of Kremlin propaganda that has underpinned the invasion, are aware that public repudiation of Russian place names can be exploited to feed Moscow's unstinting narrative of victimhood.

In keeping with a longtime pattern, Maria Zakharova, Moscow's foreign ministry spokeswoman, last week posted an aggrieved tweet about ongoing attempts to "cancel" Russian culture. That drew an avalanche of furious retorts, some accompanied by grim photos of a missile attack that same day in Vinnytsia, a sleepy provincial city in the center of the country, where at least 23 people were killed, including three children.

Many in Ukraine's cultural and political circles say turning away from Russian commemorative names is not an attack on the accomplishments of particular figures, especially those in the artistic sphere, but rather an assertion of Ukrainian identity.

"We have our own history, and our own heroes," said Andriy Moskalenko, a Lviv deputy mayor who heads an advisory body coordinating the city's street-renaming drive.

A short time earlier, in the interval after an air-raid alert that sent City Hall workers into shelters, he had hurried to the funeral — one of the day's customary back-to-back military memorials held at a nearby church — for a local man he had known, a father of five who was killed at the front.

But old habits die hard. At a coffeehouse on Tchaikovsky Street, server Valeriya Chernova, 22, said she never gave a moment's thought to the cafe's address. However, the expected name change on the street where she works made her think of her hometown, the bomb-battered eastern city of Kharkiv, where she has often walked a street named for Alexander Pushkin, the celebrated Russian poet.

Kharkiv, under attack since the war's earliest days, has traditionally been a Russophone city, located just 25 miles from the Russian border. But Chernova said it was familiarity, not any sense of lingering attachment to the country that has bombed entire swaths of the city into oblivion, that would likely keep the name alive.

"I think no matter what, we'll keep thinking of it as Pushkin Street, and keep calling it that," she said. "Just because we always have."

That's all the more reason that the renaming push should have taken place years or decades ago, said Roman Chmelyk, director of the Lviv Historical Museum. Russian cultural dominance should have been strongly challenged long before now, he said, without waiting for the horrifying impetus of war.

"Really, we should have done all this much sooner," he said.

Some historians, like Dyak, would like to see more diversity in replacement names, rather than defaulting to honoring mainly men, particularly to those in the political world. She would like to see more women commemorated, more remembrance of a thriving Jewish community wiped out during World War II, more nods to Ukraine's past intertwining with neighboring Poland.

Some of the suggested new tributes reach into unlikelier cultural realms. In Odesa, activists started a petition drive to scrap a monument to Catherine II, called Catherine the Great by Russians, in favor of a tribute to the late American gay adult-film actor Billy Herrington.

On Tchaikovsky Street, as a midsummer evening softened into dusk, the Lviv Philharmonic was tuning up for a tribute to Myroslav Skoryk, a contemporary Ukrainian composer who died in 2020. Concertgoers, some wearing jeans and T-shirts and others clad in their formal best, waited patiently for the auditorium doors to open.

Like so many Ukrainian public buildings these days, the concert hall doubles as a relief-supply center, with boxes of donated goods — medicine, diapers, toiletries — piled high in the anteroom and even tucked away in corners of the performance hall. Patrons threaded their way between the stacks to find their seats.

"It's a good feeling, to listen together to Ukrainian music," said attendee Damian Peretiatko, 30. "In these times, it helps."

The house lights dimmed. The music swelled. The audience sighed.

Tchaikovsky, it seemed, would have to wait.