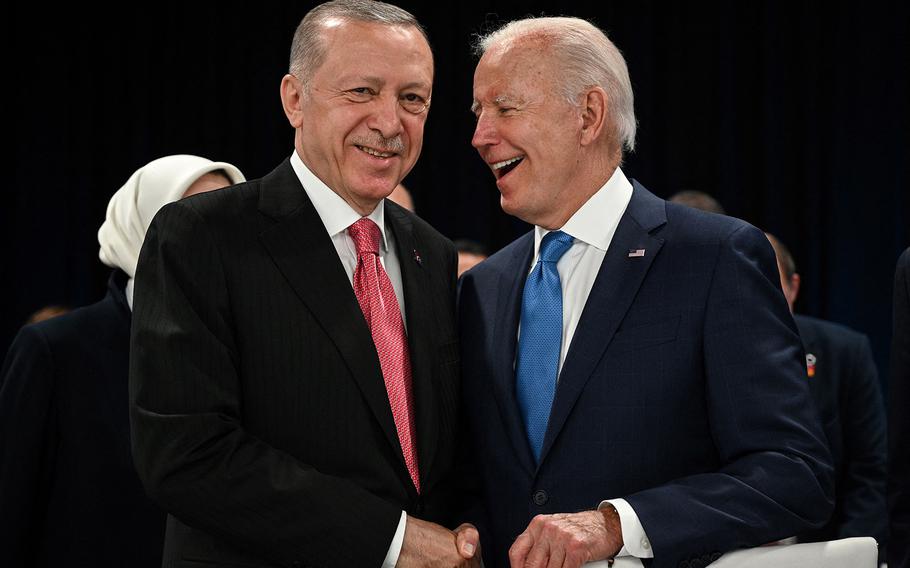 Turkey’s President Recep Tayyip Erdogan (left) and US President Joe Biden shake hands at the start of the first plenary session of the NATO summit at the Ifema congress centre in Madrid, on June 29, 2022. (Gabriel Bouys/AFP via Getty Images/TNS)

MADRID — Under pressure to find new ways to confront Russia as its deadly invasion of Ukraine drags into its fifth month, President Joe Biden and his NATO allies Wednesday announced a historic surge of forces along Europe’s eastern flank and welcomed Finland and Sweden as soon-to-be members as they promised to defend “every inch” of NATO territory.

“In a moment when Putin has shattered peace in Europe and attacked the very, very tenets of rule-based order, the United States and our allies — we’re going to step up,” Biden said. “We’re proving that NATO is more needed now than it ever has been. And it’s as important as it ever has been.”

NATO’s resurgence and expansion, after years when it sometimes seemed adrift, was intended to signal that Russian President Vladimir Putin’s invasion of Ukraine is having an impact opposite from the one he sought. The Russian leader wanted “less NATO,” Stoltenberg said, but instead is getting “more NATO.”

The United States and its allies have been looking for ways to show that their early determination to help Ukraine and confront Russia would not wane, despite Moscow’s recent gains on the battlefield and growing domestic costs of the conflict for America and other countries. Still, the war could drag on for months or years, and its final geopolitical impact is far from clear.

The new U.S. military deployments include a permanent headquarters for the U.S. 5th Army Corps in Poland — a move that Putin has long resisted — as well as additional rotational combat brigades to Romania; enhanced rotational deployments to the Baltic region; an increase in the number of destroyers stationed at Rota, Spain, from four to six; and two additional F-35 squadrons to the United Kingdom.

The alliance also released its new Strategic Concept, its first since 2010. The document, a road map for addressing threats and challenges in the coming decade, underscores just how much the security environment has changed in recent years; the previous Strategic Concept called Russia a “strategic partner” and did not mention China at all, while this one will directly address both Russia’s current aggression and China’s growing influence.

White House officials said that the combination of the accession of Finland and Sweden — two militarily nonaligned Nordic states prompted to join by Russia’s invasion of Ukraine — and the more robust force posture in Europe, as well as increased NATO funding targets, underscored the alliance’s resolve and growing influence.

Just a few years ago, many NATO members, including powerful ones like Germany, refused to spend 2% of their GDP on defense as the allies had agreed, and some were questioning NATO’s fundamental mission and even whether it had outlived its purpose. Putin’s invasion has changed all that with remarkable speed.

Wednesday’s announcements were also a respite from some of the tensions that recently exposed fissures among NATO allies. At a summit of the Group of Seven industrialized democracies earlier this week, leaders were unable to agree on the specifics of a deal to impose price caps on Russian oil. Significant disagreements have also emerged between some of the NATO countries over how hard to push for an end to the war in Ukraine and how to continue supporting the beleaguered country in the face of economic fallout back home.

Addressing by video some of the NATO leaders at the G-7 summit Monday, Ukrainian President Volodymyr Zelensky asked for additional military and economic support, including air defense systems, and called for an end to the conflict by winter, when he fears the weather could lead to a prolonged stalemate.

Easily the biggest breakthrough as the leaders arrived in Madrid on Tuesday was the news that Turkey had dropped its previous objections and would allow Finland and Sweden to begin the process of joining the 30-member military alliance. Turkey, like all NATO allies, has a veto over new members, and it objected to the two countries’ support for certain Kurdish groups.

White House officials said that while Biden deliberately did not insert himself deeply into the talks between Turkey, Finland and Sweden, he worked behind the scenes to give the agreement a final push.

In a phone call Tuesday morning with Turkish President Recep Tayyip Erdogan — in advance of Erdogan’s in-person meeting with Stoltenberg and the leaders of Finland and Sweden — Biden pressed the Turkish leader “to seize this moment, get this done in Madrid,” said a senior administration official, speaking on the condition of anonymity to share candid details of how the agreement came together.

Biden also told Erdogan that finalizing a deal Tuesday evening, at the beginning of the NATO summit, would set up a “very good opportunity” for the two leaders when they meet in person Wednesday.

The accession of the Nordic countries had long been in the works, administration officials said, noting that in the months before Russia entered Ukraine, as Moscow began massing troops on the country’s border, Biden had recognized the changed European security environment, and in December reached out to Finnish President Sauli Niinistö to begin conversations about the possibility of Finland and Sweden joining NATO.

Putin has always bitterly objected to any expansion of the alliance, whose members pledge to come to each other’s defense in case of any attack, seeing it as a way of hemming in his country and limiting its influence.

Biden and Niinistö spoke again in January, and then Biden invited the prime minister to the White House for a more detailed conversations. There, during their discussion in the Oval Office, the two leaders picked up the phone and, around 10 p.m. one night, called Swedish Prime Minister Magdalena Andersson to continue the conversation with her.

Having the effort come together at the outset of a summit designed to signal NATO’s determination is particularly resonant, officials said.

“The timing is obviously excellent,” the senior administration official said. “This obviously is just a powerful shot in the arm from the point of view of allied unity and also a historic moment for the alliance, two traditionally neutral countries choosing to sign up to NATO and being welcomed by NATO.”

The alliance had previous agreed to deploy additional forces on its eastern flank, scaling up from the existing battle groups to brigade-size units.

Most of those troops won’t actually sit in the front-line countries, but they will preposition their equipment and train on the ground frequently so that they are ready to speed to the defense of the NATO countries that border Russia in case of an emergency.

The Madrid summit also marks the first time that leaders of four Asian countries — Australia, Japan, New Zealand and South Korea — attended the military and diplomatic gathering, signaling the alliance’s growing focus on Asia even amid Russia’s war in Ukraine.

Many Asian nations fear that if Russia succeeds in winning control of Ukraine, it will encourage China to show similar aggression toward its own neighbors.

“Japan is totally appalled by what is going on in Ukraine,” said Koichiro Matsumoto, Japan’s deputy cabinet secretary for public affairs. “And it is not just a problem for European countries.”

“We made it very clear in the G-7 summit that we should not let any country draw the wrong lessons from Russia’s aggression in Ukraine,” he said. “We must stand firm and apply the maximum level of sanctions that we can agree.”