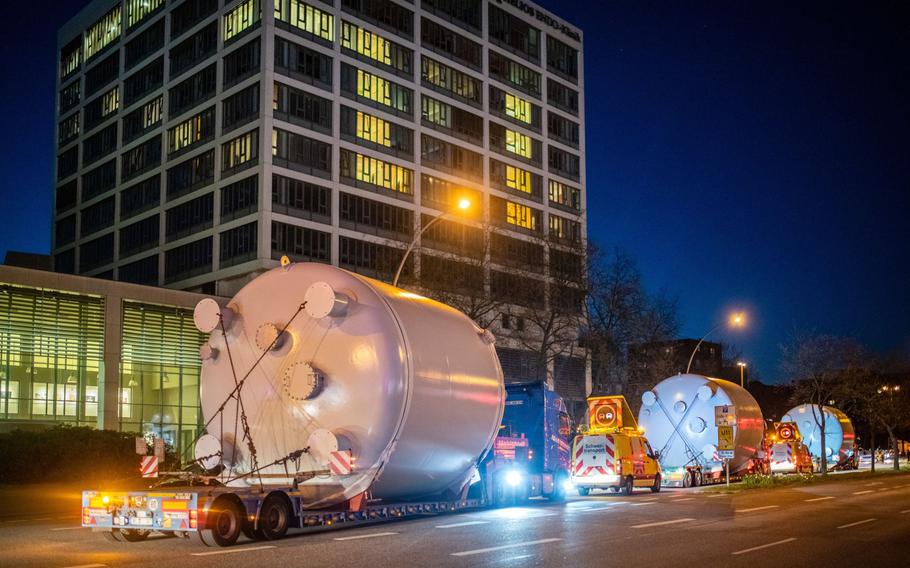 Trucks transport fuel tanks through the streets of the St. Pauli district of Hamburg, Germany, on April 19, 2022. (Imke Lass/Bloomberg)

Germany is stepping up efforts to respond to a cut in Russian gas supplies by reviving coal plants and providing financing to secure gas for the winter, an effort that would cost about 15 billion euros ($15.8 billion) at current prices.

The package of measures was announced days after Moscow slashed deliveries on its main gas link to Europe, hitting supplies to Germany and creating a knock-on effect for France, Austria and the Czech Republic. Austria responded to reduced flows by reviving a dormant coal power station.

Bringing back plants burning the heavily polluting fossil fuel is the latest sign of how Europe's climate fight is taking a back seat as governments seek to hedge against energy shortfalls provoked by President Vladimir Putin's invasion of Ukraine.

"It's a sort of arm-wrestling in which Putin has the longer arm for now," Economy Minister Robert Habeck — a member of the environmentalist Greens — said on ZDF television late Sunday. "But that doesn't mean that we can't attain a stronger arm with effort."

Stephan Haufe, a spokesman for Germany's economy ministry, said Monday at a regular news conference that despite the latest policy reversal the ruling coalition in Berlin is still standing by a pledge to aim for a complete exit from coal by 2030.

He also said Germany will respect limits set out in the European Union's emissions certificates program. The European Commission's energy spokesman, Tim McPhie, told reporters in Brussels on Monday that member states that resort to greater use of coal to secure energy supplies in the short term must respect the bloc's binding climate goal for this decade.

"We know that the energy mix and the plans of member states will adjust slightly because we are in an unexpected situation where we've decided to end our dependency on Russian fossil fuels," McPhie said.

The heightened alarm on gas was triggered after the Kremlin cut deliveries last week in apparent retaliation over Europe's support for Kyiv. Flows through the Nord Stream 1 pipeline were reduced by about 60% as Chancellor Olaf Scholz and counterparts from France, Italy and Romania traveled to Ukraine to support the country's bid to join the European Union.

While the government didn't immediately provide details on the size of the program, German gas storage is at about 57% of capacity. Buying the nearly 120 terawatt hours needed to top up the facilities would cost about 15 billion euros at current rates of 123 euros per megawatt hour.

Gas supplies on Monday for Italy's Eni SpA have only been "partially confirmed." Germany's Uniper — the biggest buyer of Russian gas in Europe — has also said it was getting less than agreed.

Russia's move led prices to surge more than 40% last week, creating concerns that inflation could get worse. Since the beginning of the war in Ukraine, Germany has been preparing for a cut and has tapped resources, including securing floating terminals to import liquefied natural gas, to fill a possible supply gap. Europe's largest economy still depends on Russia for 35% of its gas needs.

"Security of supply is currently guaranteed, but the situation is serious," Habeck said, adding that supplies will be "really tight" in the winter without full reserves.

The tight supplies briefly led to a draw down of storage last week, but Germany's network regulator, known as BNetzA, said the facilities are filling up again. The government will provide gas-market manager Trading Hub Europe, with the liquidity to purchase supplies necessary to achieve its target of 80% full by Oct. 1 and 90% by Nov. 1.

The KfW's financing will be secured by a guarantee from the government. Germany had already asked Trading Hub Europe to buy liquefied gas for storage in March. The company — formed by gas grid operators, such as Open Grid Europe and Gasunie — is financed by network charges paid by gas consumers in Germany.

The country's three-stage crisis plan is currently at the first level. At the highest stage, the state would take control over Germany's gas distribution.

"Very little has been discussed about the alert level, although it is much more likely to take effect soon," said Christoph Merkel, managing director of consultancy Merkel Energy.

A bill providing the legal basis to burn more coal for power generation is making its way though parliament and should take effect soon after discussions in the upper house take place on July 8.

In Austria, state-controlled Verbund AG was ordered late Sunday to prepare its mothballed Mellach coal-fired station for operation. The plant — located 200 kilometers (124 miles) south of Vienna — was shut two years ago in a move that at the time made Austria just the second European country to eliminate coal entirely from its electricity grid.

Austrian Gas Grid Management said Monday in a regular report that there were reduced gas flows through the Nord Stream pipeline but imports to Baumgarten and eastern regions were "stable."

"Despite the conflict in Ukraine, there is currently no disruption observed to the supply of Austrian end customers," the report said.

Habeck said that reviving coal is "bitter" but added that "it's simply necessary in this situation to reduce gas consumption."

"We must and we will do everything we can to store as much gas as possible in the summer and fall," he said.