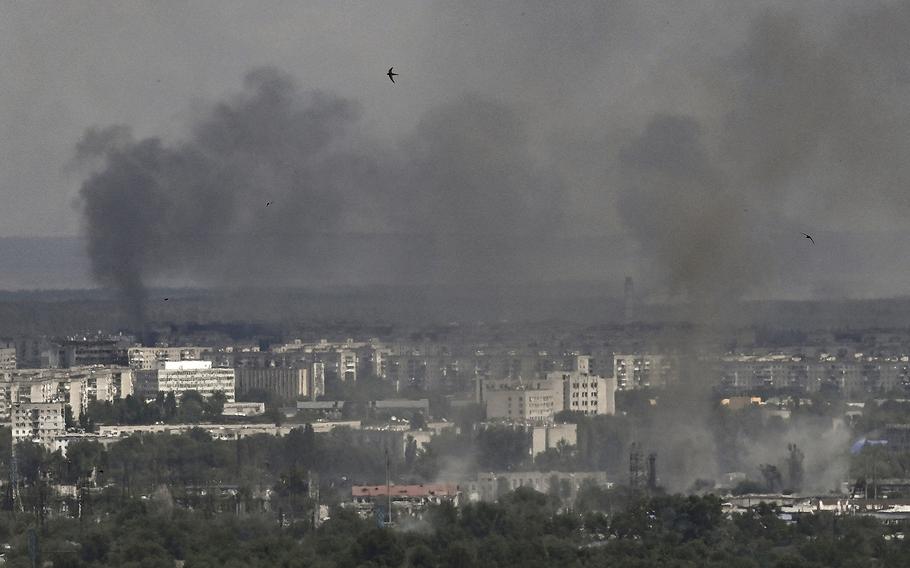 Smoke and dirt rise from the city of Severodonetsk in the eastern Ukrainian region of Donbas on June 17, 2022, as the Russian-Ukraine war enters its 114th day. (Aris Messinis/AFP/Getty Images/TNS)

President Joe Biden Friday said the U.S. does not know what has happened to at least two Americans who have gone missing while fighting in Ukraine.

The commander-in-chief repeated warnings against Americans volunteering to fight on the side of the Ukraine government, regardless of how strongly they support Kyiv's cause.

"We don't know where they are," Biden told reporters as he headed home to Delaware for the weekend. "I want to reiterate, Americans should not be going to Ukraine now."

"I'll say it again: 'Americans should not be going to Ukraine,'" he added.

Two U.S. veterans who were fighting in Ukraine, identified as Alabama residents Alex Drueke and Andy Tai Ngoc Huynh, have not been heard from since last week, their families say.

Relatives are worried about whether they may have been killed, wounded or captured in the raging conflict with Russian invaders.

The State Department said Thursday that there were reports of a third American citizen possibly missing while fighting in the country, but it did not release a name.

U.S. officials have been in touch with the Ukrainian government as well as other nongovernmental organizations in the region as they monitor the situation, State Department spokesman Ned Price said.

Alex Drueke's mother told CNN that "they are presumed to be prisoners of war, but that has not been confirmed."

Price said there has been no intelligence that the missing Americans are in Russian custody.

An unknown number of American citizens, mostly with military backgrounds, have traveled to Ukraine to join the country's foreign legion and fight alongside Ukrainian soldiers there.

Some are of Ukrainian heritage but many have been inspired by Ukraine's fight for democratic values and self-determination.