How the 3D-printing community worldwide is aiding Ukraine 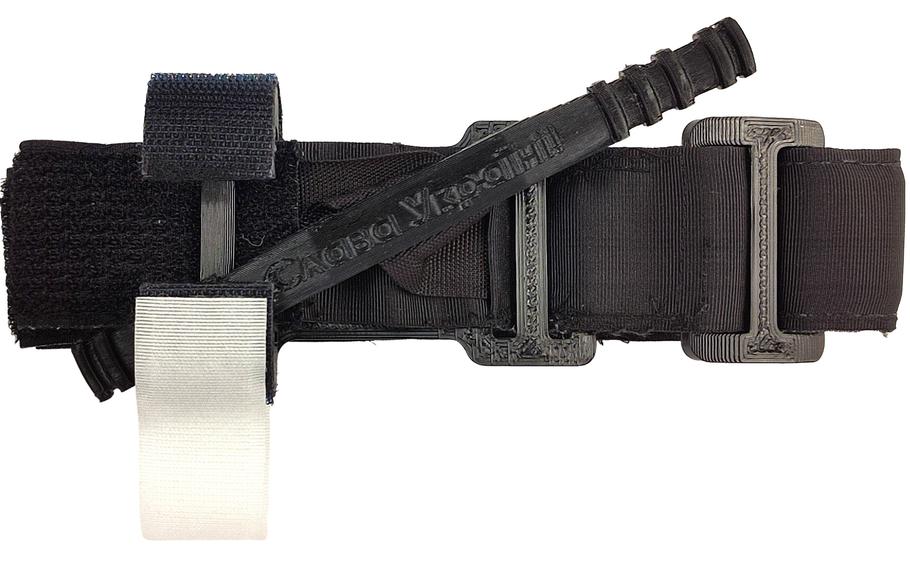 In early March, Jakub Kaminski was at home in suburban Boston when a grim message arrived from his friend, a surgeon in Ukraine: Tourniquets were in short supply, and without them, many Ukrainian soldiers could bleed out and die.

Kaminski, a robotics engineering graduate student at Worcester Polytechnic Institute in Massachusetts, thought his 3D-printing skills could help. Over the next two months, Kaminski and volunteers he recruited designed and refined eight versions of a tourniquet — pieces of cloth connected by buckles and plastic fastening clips — until they made one that was durable enough for war. It was easy for a soldier to tie and could be printed with consistently high quality.

Now, they’ve uploaded their best design to the internet. Around 120 individuals and companies worldwide with 3D printers have accessed the design. Together, they have made roughly 5,000 reusable tourniquets that are bound for Ukraine, where they will be stitched and sent off to the battlefield, Kaminski said.

“It’s a beautiful thing,” he said. “If you make people in Ukraine feel better, and enable people to help. ... This is something really special.”

Nearly four months into Russia’s invasion of Ukraine, critical shortages of medical supplies and weapons accessories persist. But help has come from an unlikely source: Those with 3D printers. Using digital files, people are designing supplies such as bandages, tourniquets, splints and add-ons to AK-47 guns. Using computer-aided design software, special printers create three-dimensional objects with plastics or biomaterials, enabling a large crowdsourced effort to produce supplies and ship them to the battlefield.

But the invasion has provided the 3D-printing community a challenge with little comparison, one that highlights the impact the technology has in plugging real-time shortages and underscores the dangers of having to rely on goods created in an ad hoc way.

And though the fighting in Ukraine has declined from its peak, the community is continuing to create needed items as the war continues to drag on.

“No one believes [the war] will end very quickly,” Kaminski said. “We want to be ready ... for the future.”

The history of 3D printing traces to the 1980s, when American engineer Charles Hull patented a process called stereolithography, which uses ultraviolet light to shape objects. Over the years, that process was refined and became cheaper and quicker, and machines were able to use software-created designs to print out objects such as medical devices, spare parts, toys and jewelry.

3D-printed supplies often help in times of crisis. They provide medical workers, military personnel and aid organizations the ability to design what they need and print the items quickly, removing the difficulties that come with international shipping and manufacturing delays. But the quality of printed goods can be poor, and creating supplies with a 3D printer often takes more time than other methods, such as manufacturing with injection molds.

In 2010, during the devastating earthquake in Haiti, medical devices were printed quickly, allowing doctors to provide health care without waiting for equipment to ship from abroad. In 2018, an organization called the Glia Project came to the aid of Palestinian civilians injured in the Gaza Strip while protesting against Israel, creating and shipping them a 3D-printed “Gaza tourniquet.”

But in February, as Russia invaded Ukraine, the 3D-printing community was put to the test. The fighting in Ukraine was fierce, many were injured, and the country’s stores of basic medical supplies were dwindling. People in the 3D-printing community talked with Ukraine military officials, hospital administrators and charity organizations, trying to gauge what they could print quickly that would be most helpful. Tourniquets and bandages were repeated requests.

Mykhailo Shulhan, the chief operating officer of a 3D-printing company in Lviv, Ukraine, said that as soon as the invasion began, he started researching how 3D printers helped in other conflicts. His company settled on providing trauma bandages — pieces of wide cloth that cover large wounds — and churned out roughly 2,000 per month.

But now, Shulhan said, different things are in short supply. In the early days, he said, when paid military troops represented most of the fighting force, medical supplies were in dire need. But over the subsequent months, as more volunteers joined the Ukrainian resistance, weapons components and accessories became necessary to meet the rise in troop numbers.

These days, his company, 3D Tech Addtive, develops and prints an array of weapons accessories: AK-47 holsters so soldiers have a way to rest their guns; bullet magazines since empty cartridges often get thrown away instead of reused; carrying bags for grenades; and most recently, anti-reflective lenses for sniper scopes to reduce glare and prevent Ukraine snipers from being seen. (All together, they have provided over 5,000 components to the front lines, Shulhan estimated.)

Meanwhile, the pace of production exacted a toll. In the early days of the invasion, there were large shortages in printing filament, mostly because local suppliers were in war ravaged areas. Those suppliers have since shifted to Western Ukraine and have resumed supply.

Now the challenges are different. Nearly all of his company’s 30 3D printers come from China, he said, and they’ve broken down occasionally and needed spare parts. It’s been hard to get them because they are expensive and getting them shipped has proved difficult. “There are times when a 3D printer is broken, and we can’t do anything with it for two or three weeks,” he said.

While most 3D printers create supplies to stop death or ease fighting conditions, others are focusing on rehabilitating soldiers.

Brett Carey, a physical therapist in Hawaii, designs 3D printed splints that can be sent to fighters. Hand fractures are very common in war and when poorly treated they can cause long-term issues. “You need your hands for so many basic hygiene and survival type tasks,” he said. “If the soldiers are splinted properly, they should be able to have full use of their hand again within eight to 12 weeks.”

Carey has created two digital designs for splints that have been uploaded online and 3D printed over 1,500 times. If injuries are advanced, he has people send him images of their injuries using EM3D — a 3D imaging app — which allows him to make a custom made splint which is then shipped to Ukraine. And going forward, he said, supplies that improve long-term medical outcomes will be likely be needed.

“There is such an emphasis right now on life saving technology,” he said. “But there’s definitely a need on the rehabilitation side, so that after the injury, people can start to get their lives back.”

Kaminski, who posts his tourniquet designs online, said he worries about some 3D printers sending over supplies to the battlefield. In the beginning of the war, he noticed many with printers wanted to help, but they created designs of medical supplies that resulted in poor quality goods. He also noticed off-the-shelf tourniquets made in China were being deployed in the field and breaking.

Seeing that, Kaminski and a group of volunteers worked for weeks to redesign their tourniquet to meet the highest medical standards.

Kaminski filmed the device being rolled over by a firetruck to show durability. Volunteers at laboratories in Poland stress tested the 3D printed tourniquet to prove it could withstand over 150 pounds of pulling pressure. Ultrasound testing was done at Worcester Polytechnic Institute to show the tourniquet could completely stop blood flow. Now, Kaminski has sent a batch to a volunteer at Johns Hopkins University for testing.

“It is unethical to just come up with a totally new tourniquet design and deploy it during war,” he said.