Tourniquets, body armor, ambulances: A lifeline from Minnesota to Ukraine 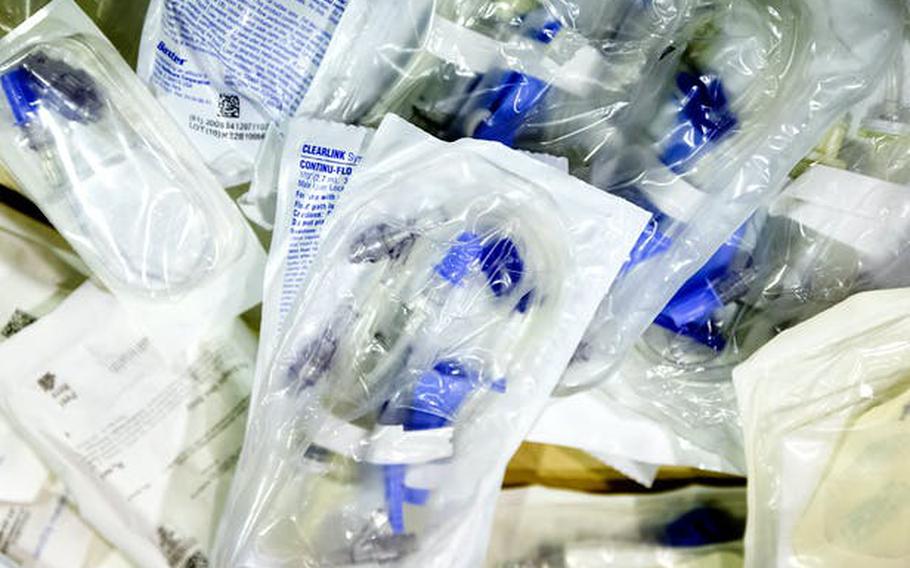 On a Sunday evening in May, a large box of medical supplies packed by volunteers in a Minneapolis gym arrived at his hospital in Odesa, a medical facility that has been suddenly immersed in the horrors of war.

Early the next morning, a 60-year-old Ukrainian soldier arrived at the hospital needing emergency surgery to prevent his left leg from being amputated. Searching the box of donated supplies, Stanko discovered the very surgical tool that he and his fellow doctors needed for a vascular bypass operation to save the man's leg.

"It's unbelievable, really," said Stanko, who spoke last week by phone while working the overnight shift at the Odesa hospital. "This is how different people from different parts of the world can save lives and limbs — and make victory in this war possible."

The successful surgery is but one of dozens of recent cases in which Ukrainians on the front lines have benefited from a volunteer effort more than 5,000 miles away in Minnesota to provide them with humanitarian aid.

Through an ever-widening network of personal contacts, Minnesotans are delivering a vast assortment of medical supplies and protective gear — tourniquets, intravenous bags, body armor and even military ambulances — to southern and eastern Ukraine, where Russian missile strikes have devastated civilian areas and inflicted mass casualties. Over 15 weeks of war, nearly $500,000 worth of supplies have been collected and sorted by volunteers in Minnesota, placed on passenger jets to Poland and transported to cities in Ukraine as far east as Kherson and Mykolaiv.

Like the war itself, the scale of the humanitarian aid effort has surpassed the imagination of Minnesota's Ukrainian community. What began as a few people collecting tactical gear in their living rooms has morphed into a sophisticated operation with a small army of volunteers that includes dozens of local Ukrainians, Latvians, Belarussians and Russians. People who spend their days as doctors, nurses, graphic artists and small-business owners have become experts on battlefield medicine, types of body armor and international transport logistics.

The aid has gone far beyond care packages. The group plans to fill a 40-foot shipping container with medical supplies and transport it from Minnesota to Lviv, a city in western Ukraine, by the end of June.

A core group of the volunteers — organized under the group Stand with Ukraine MN — has been in regular contact with soldiers and medical personnel near the front lines. Some Ukrainians have sent text messages from battle zones expressing heartfelt gratitude for the supplies. In a recent text, a medic from the Donetsk region of eastern Ukraine said tourniquets sent from Minnesota were used on three wounded soldiers during heavy fighting — and likely saved their lives. In another message, a soldier said special headphones delivered by the group prevented him from experiencing permanent hearing loss from a battlefield explosion.

"It's like an expanding spider web of people connected to do good," said Sasha Sakurets, a volunteer and nurse at M Health Fairview Masonic Children's Hospital. "The most rewarding part is knowing that these supplies are going directly to the people who need it most."

The relief effort has evolved to meet the rapidly changing situation on the ground.

Tactical medical gear — such as high-quality tourniquets, sutures and hemostatic gauzes to stop catastrophic bleeding — are in high demand because of Russia's relentless airstrikes. An investigative report issued by human rights experts in May concluded that Russia's indiscriminate bombardment of residential areas and deliberate attacks on humanitarian corridors, among other atrocities, establish a "genocidal pattern" and "intent to destroy" Ukrainians. As of Tuesday, the United Nations has confirmed 4,266 civilian deaths and 5,178 injuries in Ukraine since Russia's onslaught began on Feb. 24. Nearly 7 million Ukrainians have fled the country — the largest exodus of refugees in Europe since World War II.

Much of the donated equipment is packed into suitcases and duffel bags — and brought on passenger flights to the Polish cities of Warsaw and Krakow. From there, volunteers rely on personal contacts to drive the supplies across the Ukraine border. One volunteer, Roman Kovbasnyk, recently completed a whirlwind trip to Europe in which he delivered 14 suitcases of tactical gear. Then he arranged to have a military-style ambulance, capable of driving off-road on rescue missions, sent from Germany to the Donbas region of eastern Ukraine.

"The feeling we share is, this equipment has to be in Ukraine right now because every day that it sits here is a missed opportunity — a day that it's not saving people," said Kovbasnyk, who runs a small trucking logistics business out of his home in Mankato.

The effort to collect and distribute lifesaving equipment is also therapeutic. Many in Minnesota's tight-knit Ukrainian community said they have felt traumatized by the daily barrage of horrific images emerging from the war, including bodies strewn in streets, wounded pregnant women and children with amputated limbs. Distributing supplies, several volunteers said, has helped take their minds off the war and alleviate guilt that they are not doing enough to help their compatriots.

"Sometimes it feels like I'm watching my own children being attacked, and I can't do anything to stop it," said Yosyf Sabir, a father of two and graphic artist who is an activist in the Twin Cities' Ukrainian community. "The only way to feel empowered — to feel human — is to step up and act."

On a recent evening, the gym at the Ukrainian American Community Center in northeast Minneapolis was buzzing with activity.

Four pallets of donated medical supplies had just arrived from a Twin Cities-area hospital. The volunteers, mostly women, were carefully arranging items on separate tables by medical categories such as "wound care" and "vascular access." The mood was buoyant, and there were occasional shouts of joy when volunteers discovered a surgical tool they knew was needed in Ukrainian hospitals. Notecards with inspirational messages — "Glory to Ukraine!" and "Minnesota is with you!" — were tucked inside each box and suitcase bound for Ukraine.

Dr. Tanya Melnik, a leader of the volunteer effort, is an internal medicine doctor at the University of Minnesota who cares for women with complicated pregnancies. But lately, she has become a quick student of tactical medicine and wound care.

"I have to investigate things like chest seals and tourniquets to make sure they actually will do the job," Melnik said. "You need to do the research, because it will save lives."

On a rare quiet night in Odesa, Stanko took a break from caring for patients to reflect on the grinding war and its daily atrocities. He likened the missile strikes to focused tornadoes in which flying debris can kill or maim civilians more than 100 yards from the epicenter. Hospitals in larger cities such as Odesa are seeing a surge of patients in part because facilities in smaller cities have been badly shelled or destroyed.

"It's absolute madness," Stanko said. "You can never be ready for such a thing as war, especially when it's your neighbor attacking you."