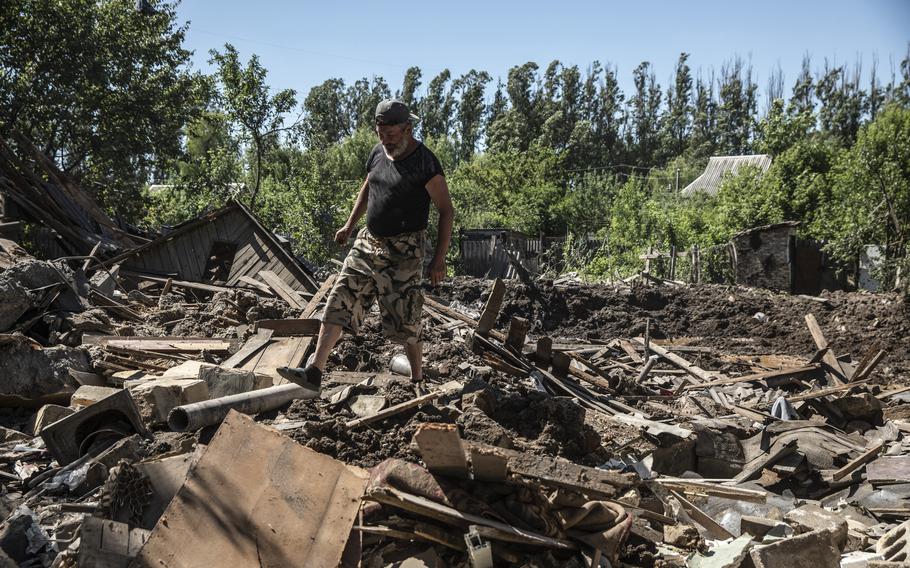 Yuriy Makagon stands amid the rubble of his neighbor's home in the eastern Ukrainian village of Kostiantynivka on June 10, 2022. (Heidi Levine/The Washington Post)

Newly promised Western weapons systems are arriving, but too slowly and in insufficient quantities to prevent incremental but inexorable Russian gains in the eastern Donbas region of Ukraine, which is now the focus of the fight.

The Ukrainians are still fighting back, but they are running out of ammunition and suffering casualties at a far higher rate than in the initial stages of the war. Around 200 Ukrainian soldiers are now being killed every day, up from 100 late last month, an aide to President Volodymyr Zelensky told the BBC on Friday — meaning that as many as 1,000 Ukrainians are being taken out of the fight every day, including those who are injured.

The Russians are still making mistakes and are also losing men and equipment, albeit at a lesser rate than in the first months of the conflict. In one sign that they are suffering equipment shortages, they have been seen on videos posted on social media hauling hundreds of mothballed, Soviet-era T-62 tanks out of storage to be sent to Ukraine.

But the overall trajectory of the war has unmistakably shifted away from one of unexpectedly dismal Russian failures and tilted in favor of Russia as the demonstrably stronger force.

Ukrainian and U.S. hopes that the new supplies of Western weaponry would enable Ukraine to regain the initiative and eventually retake the estimated 20% of Ukrainian territory captured by Russia since its Feb. 24 invasion are starting to look premature, said Oleksandr Danylyuk, an adviser to the Ukrainian government on defense and intelligence issues.

“The strategies and tactics of the Russians are completely different right now. They are being much more successful,” he said. “They have more resources than us and they are not in a rush.”

“There’s much less space for optimism right now,” he added.

Ukrainian forces remain resolute. In a cafe in the front-line town of Slovyansk, two Ukrainian soldiers on a break from the trenches nearby recounted how they were forced to retreat from the town of Dovhenke, northwest of Slovyansk, under withering Russian artillery fire. Thirty-five of their 100-strong unit were killed in the assault, typical of the tactics Russia is using. “They destroy everything and walk in,” said one of the soldiers, Vitaliy Martsyv, 41.

“There is nothing there,” Andriy Tihonenko, 52, said of Dovhenke. “It’s all burned down.”

As troop fatalities mounted, the surviving soldiers felt “more motivated to hold our position,” Tihonenko said. To retreat after their comrades were killed defending the town, he said, would have felt like treating their deaths as insignificant.

But eventually, the defensive line was no longer effective, the two men said. With more than one-third of their force killed, the remaining soldiers had no choice but to pull back.

“Sometimes you feel down,” Tihonenko said. “But then you realize war is war — and you have to finish it.”

But the odds against the Ukrainians are starting to look overwhelming, said Danylyuk, the government adviser.

Ukraine has now almost completely run out of ammunition for the Soviet-era weapons systems that were the mainstay of its arsenal, and the Eastern European countries that maintained the same systems have run out of surplus supplies to donate, Danylyuk said. Ukraine urgently needs to shift to longer-range and more sophisticated Western systems, but those have only recently been committed, and in insufficient quantities to match Russia’s immense firepower, he said.

Russia is firing as many as 50,000 artillery rounds a day into Ukrainian positions, and the Ukrainians can hit back with only around 5,000 to 6,000 rounds a day, he said. The United States has committed to deliver 220,000 rounds of ammunition — enough to match Russian firepower for around four days.

The majority of the American M777 howitzer artillery guns that U.S. officials said would enable Ukraine to match Russian firepower are now in use on the battlefield, according to the Pentagon. Yet the Russians continue to advance.

Four of the more sophisticated and longer-range HIMARS multiple-rocket launcher systems that the Ukrainians had long requested from the United States are on the way, along with three similar systems pledged by Britain. But the Ukrainians will first have to be trained how to use them, and they are still weeks away from reaching the battlefield, U.S. officials say. The Pentagon has hinted that more systems will be made available once the Ukrainians have demonstrated they can be used.

But the Russians started the war with about 900 of their own similar systems, and although the Ukrainians claim they have destroyed hundreds, the Russians still have hundreds left, Danylyuk said.

The Russians have meanwhile adapted their tactics in ways that have let them take full advantage of their firepower by remaining at a distance from Ukrainian positions, pounding them relentlessly, then taking territory once the Ukrainians have been forced to retreat.

Russian officials have claimed they are advancing more slowly than during the initial invasion to avoid civilian casualties. Instead, however, the tactic helps reduce Russian casualties while inflicting heavy losses on the civilians who live in the towns and villages being targeted, analysts say.

“I’m afraid of every single boom or sound,” Irina Makagon said as she sat in her kitchen in Kostiantynivka, a town near the front line that has suffered intense bombardments. She was sitting in her kitchen earlier this week when a boom and a whistle heralded an incoming shell that crashed into the house next door, killing a young man.

The Ukrainians are still fighting well and can inflict tactical pain on the Russians when the opportunity presents itself, said Dmitri Alperovitch of the Silverado Consultancy, citing Russia’s disastrous attempt late last month to cross the Siverskiy Donets river — hundreds of Russians were killed and scores of military vehicles were destroyed. The Ukrainians are also conducting successful drone strikes against Russian positions and supply columns, he said.

Russia has not released casualty figures since March. “But when you look at what’s happening, I’d be shocked if the Russians are sustaining casualties anywhere close to what the Ukrainians are right now,” Alperovitch said.

Manpower is less of a problem for the Ukrainians than the shortages of ammunition and equipment, said Danylyuk, who put the number of men who have signed up to potentially fight at 6 million. But Ukraine doesn’t have the equipment, including protective gear and guns as well as artillery systems, to field all those willing to volunteer. “We would be sending them to their deaths without equipment,” he said.

The Russians face manpower shortages, too, after the heavy losses they suffered in the earliest days of the war. Western officials put the number of Russian deaths at 15,000 to 20,000 so far, with as many as a third of the original invasion force rendered unfit for combat because of injuries, capture and equipment losses after the first two months.

But Russia has regenerated its forces to a greater extent than anticipated by many military analysts, bolstering its depleted army by as many as 40,000 to 50,000 men over the past two months, by increasing the age of the reserve force, deploying new forces and refurbishing units that had been decimated, Danylyuk said.

For now, the Donetsk River stands in the way of significant new Russian advances. Western officials say they expect that Russian troops will soon secure full control of the town of Severedonetsk and then are likely to turn their attention to the town of Lysyshansk, on the opposite bank of the river, which would put them in full control of the region of Luhansk. After that, they can be expected to target the larger region of Donetsk that Russia has partially controlled since 2014.

Lysyshansk will be a tougher challenge because the Ukrainians control the high ground and the Russians’ artillery strength is less of an advantage in close urban combat, said Konrad Muzyka, director of the Warsaw-based Rochan Consulting defense consultancy. Russia may find it difficult to sustain its recent gains for much beyond that, given the losses it has suffered so far, he said.

But if the Russians manage to breach the river, they could start to make rapid advances, he said.

“The Ukrainians are resting their defense on the Donetsk river,” Muzyka said. “If Russia successfully crosses the river, my concern is that the Russians will enter Donetsk with their full might, and then the Ukrainians might be overwhelmed.”

Sly reported from London. Heidi Levine in Slovyansk contributed to this report.