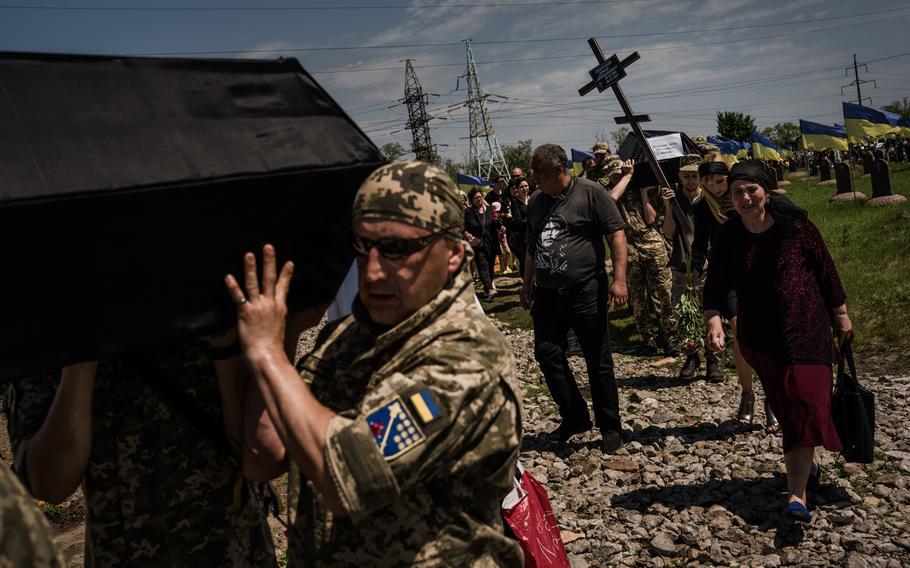 Soldiers carry caskets of their fallen comrades to their gravesites. (Wojciech Grzedzinski/For The Washington Post)

DNIPRO, Ukraine - The mourners arrived well before the military funeral was to begin, entire families crowding around a single coffin, side by side on a warm, sunny morning with other families and coffins.

Two lines of soldiers, perhaps 100 in all, stood at attention as the Rev. Dmitro Povorotny and several other Ukrainian Orthodox priests entered the small cemetery, signaling that the mourners should step back from the caskets so the ceremony could begin.

But one woman, overwhelmed with grief, could not. She sat on a bench crying as relatives comforted her. When a military band began playing Ukraine’s national anthem, she wept harder.

“Glory to Ukraine,” an officer called out.

“Glory to the heroes,” mourners responded.

To visit Krasnopilske cemetery during a military funeral is to experience the brutal sweep of Ukraine’s war with Russia and the terrible intimacy of a family’s loss. Twenty-seven soldiers were laid to rest last Friday. Of those, 12 were buried as unknowns in a military section that grows larger almost by the day.

For Povorotny, the small cemetery on the outskirts of Dnipro speaks to the sacrifice his people have paid in blood since Russian President Vladimir Putin launched the invasion on Feb. 24. In just three months, the cemetery’s military section has added 293 graves, compared with 175 in the previous eight years, since war broke out with Moscow-backed separatists in the eastern Donbas region in 2014.

“You can see how the war changed. And this is just one cemetery, one of thousands of cemeteries in Ukraine,” said Povorotny, a military chaplain and archpriest in the Orthodox Church of Ukraine’s Dnipropetrovsk region’s diocese.

Povorotny has conducted about 10 mass burials at the cemetery since the war began, he said in an interview following Friday’s ceremony. Every week, he conducts one or two individual funerals, too. He estimated that more than 700 members of the military have been killed in the Dniepropetrovsk region alone.

But when he looks into the faces of the mourners, he said, he’s convinced he can see their faith in ultimate victory, despite their losses and pain.

“Putin called it a special operation. Before that, they called it a civil war,” Povorotny said, holding a hand over the wooden cross hanging from his neck. “For us, it’s a real war of independence.” 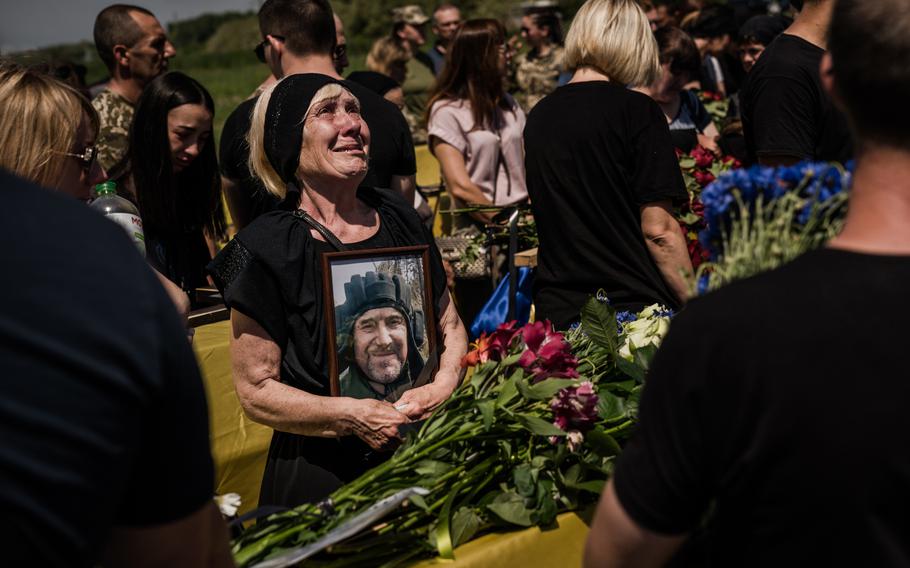 Yaroslava Sushko holds a photo of her son, Serhii V. Sushko, during a funeral for 27 Ukrainian service members who died fighting the Russians, in Dnipro, Ukraine, on June 3. (Wojciech Grzedzinski/For The Washington Post)

The funerals that occur daily around Ukraine are also unfolding with new protocols that have been rewritten to reflect Western customs, such as those followed by the United States, and uniquely Ukrainian traditions, instead of those inherited from Russia and the Soviet Union.

And they come as the nation discusses creating a new national cemetery in Kyiv that would serve Ukraine as Arlington National Cemetery has served the United States. Volodymyr Vyatrovich, a member of the Rada, the Ukrainian parliament, and a former head of the Ukrainian Institute of National Memory, said in a Telegram post last month that parliament had agreed to create a national cemetery somewhere in or around Kyiv.

To develop new military funeral practices, the Ukrainian Institute of National Memory looked at the country’s history of funeral rites, from the short-lived Ukrainian National Republic in the early 20th century to the burial practices among Cossacks, the bands of warriors who roamed Ukraine’s steppes hundreds of years ago. The institute also analyzed the modern military funeral rituals of Belgium, Israel, Poland, Turkey and the United States and visited U.S. military cemeteries.

Their work culminated in a 2019 video by the Ministry of Veterans Affairs that shows in detail how a military funeral should be conducted. Some of the rituals would be familiar to anyone who has attended a funeral with military honors at Arlington National Cemetery, including a new practice of draping the casket with the Ukrainian flag before folding and presenting it to the family. The new protocols also stipulate that up to six soldiers may fire three volleys in salute.

At Friday’s services, some of the new rituals were on display, such as the folding of the Ukrainian flag - though perhaps with less spit-and-polish precision than one might find where the custom has been conducted for generations.

The 27 coffins - each draped with a blue-and-yellow Ukrainian flag - were laid out before the ceremony in three neat rows with only enough room to walk between them. A wooden cross was laid atop each, with a sign bearing the soldier’s name in ornate script. And on the coffins containing unidentified remains, the sign said, “Here rests an unknown soldier forever to be remembered.”

Many mourners were dressed in black, including several older women wearing kerchiefs, but others wore T-shirts and shorts. Many were in uniform, including a young soldier whose military-green T-shirt was neatly folded and pinned over the stump of his missing right arm. Another mourner laid her cheek on a coffin, stroking the polished wood with her hand amid a hush so profound that the faint fluttering of the flags could be heard.

“When I look at the flags, it’s like looking at the souls of angels - and there are lots of them, you know?” said Tetyana Kaikova, 34, who attended Friday with family members from around the country for the funeral of her cousin, Serhii V. Sushko. His tank was destroyed on his birthday, May 11, in fighting near the front lines in Donbas. 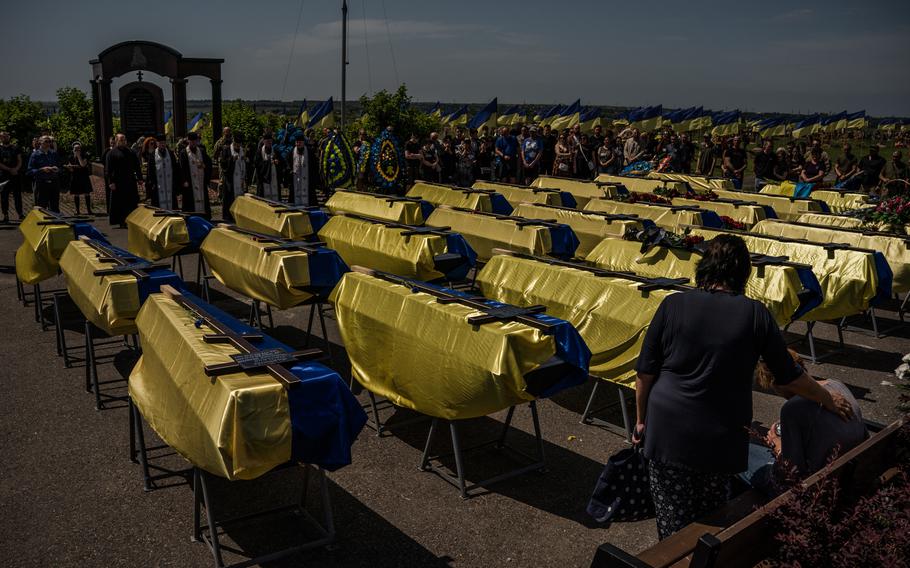 The caskets of 27 Ukrainian service members who died fighting the Russians are draped in Ukrainian flags during their funeral on June 3. (Wojciech Grzedzinski/For The Washington Post)

Though he was pulled from the wreckage, he suffered severe burns and died three days later at a hospital in Dnipro. Sushko, who lived in Kherson and served in a tank crew in the 57th Motorized Brigade, was 49.

When her cousin wasn’t fishing, Kaikova said, he was often in the kitchen whipping up a delicious pot of borscht. Kaikova said she hadn’t seen him in a year or so, but they talked on the phone often about getting together at her dacha, or countryside retreat, for a cookout.

“He was always smiling, always,” said Kaikova, who works in an international trade firm.

Sushko’s once and future wife, Angela Pavluk, was also there to lay him to rest. After 18 years of amicable divorce, she and Sushko were making plans to marry again.

Sushko was proudly self-reliant, self-effacing and patriotic, she said. A firefighter and paramedic, he refused to use a government pass that allowed him to ride public transit free and enlisted in the army soon after war with Moscow-backed separatists broke out in 2014. He didn’t even bother to tell anyone about two military commendations that he had received since February.

“He wasn’t afraid of anything. He went there from Day 1,” Pavluk said.

Marrying again was a decision that came from staying in touch all those years, and sharing in the lives of their three children and a granddaughter, Pavluk said.

“He was a really good father,” Pavluk said. She even set aside coins and stamps that he might like to add to his beloved collection.

In recent months, Sushko became so eager to wed that he offered to renew their vows online, Pavluk said.

“And I said that I do not want to do it that way,” she recalled. “We’ve already had a wedding before, so I just wanted to have a small family gathering. This is something that we wanted to do, but now, well . . . we just didn’t make it there.”

Instead, there would be a large family gathering, but of a different and terrible kind - to mourn, not celebrate.

During the funeral ceremony, as Povorotny and the other priests intoned the names of the dead and chanted, and the incense smoke drifted through the crowd with the sweet aroma of myrrh and balsam, a thunderous sound rolled over the ceremony as an antiaircraft missile was fired skyward somewhere south of the city.

The rocket cut across the sky, leaving behind a plume of white smoke that rose, twisted and began to dissolve. The priests continued their chanting, uninterrupted, as mourners turned their eyes upward, searching the sky.