Polish Prime Minister Mateusz Morawiecki speaks at the Strategic Ark Conference in Warsaw on May 19, 2022. Morawiecki said his country is prepared to construct new bases to host more NATO forces, and he urged other countries along the alliance's eastern flank to do likewise. (Krystian Maj/Chancellery of the Prime Minister of Poland)

“Permanent bases of allies should be established in NATO’s eastern flank countries,” Morawiecki said Thursday at the Strategic Ark think tank forum. “Poland is ready to build such bases (to include) light infantry units on a permanent basis.”

Before the ongoing Russia-Ukraine war, there were 80,000 U.S. troops in Europe, about 65,000 of whom are permanently based on the Continent.

Since the Feb. 24 launch of Russia’s full-scale invasion of Ukraine, temporary reinforcements have been sent in, bringing the total number to just over 100,000. 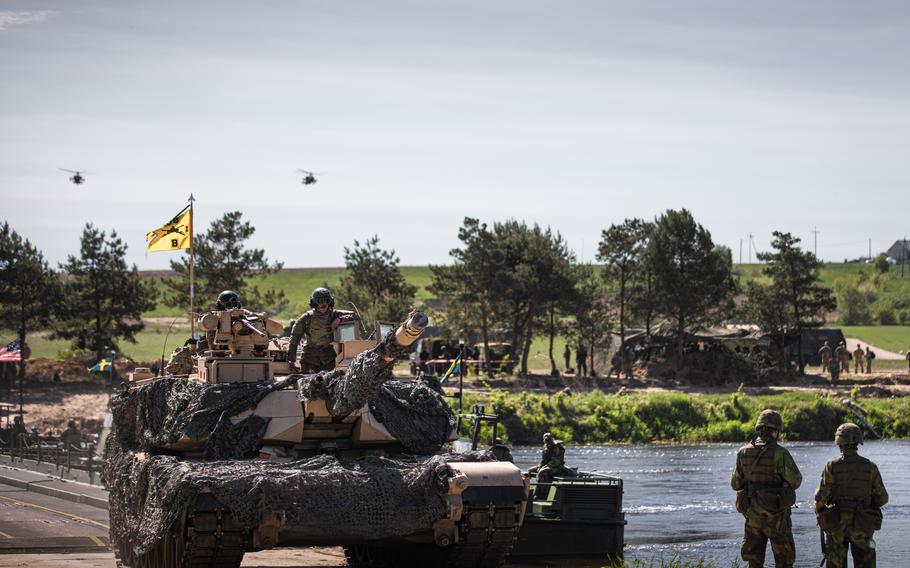 U.S. soldiers and their NATO allies complete a wet-gap crossing in Nowogrod, Poland, on May 19, 2022. The Pentagon has relied heavily on rotational forces to boost troop numbers in Europe, but that may change if a permanent basing model is adopted on the Continent. (Agustín Montañez/Army)

Morawiecki’s comments are part of an push by eastern states to galvanize support in NATO for setting up a more formidable defense force on Russia’s periphery. The Baltic states also have been especially vocal about wanting more troop commitments from allies.

The issue is expected to take center stage next month in Madrid when NATO heads of state, including President Joe Biden, are on pace to decide how to realign militaries in Europe to deal with Russia..

Gen. Mark Milley, chairman of the Joint Chiefs of Staff, has said he favors a focus on deploying rotational units to new permanent bases along NATO’s eastern flank.

Critics of the rotational model, however, say troop rotations, which often last six months at a time, strain morale because of lengthy family separations. They argue that switching to permanent basing would alleviate the emotional toll of the rotations.

In Warsaw, U.S. Army Maj. Gen. Jeff Broadwater, deputy commander of V Corps, said that whatever decisions are made in Madrid, the aim should be on overcoming “the tyranny of distance” so troops can get to hot spots quickly.

NATO Secretary-General Jens Stoltenberg has said the security pact needs to make adjustments that include substantially more forces in the eastern part of the alliance. But what that could look like isn’t yet clear.

“It is important that we sustain our efforts and reset our posture for the longer term,” Stoltenberg said Thursday at a meeting of NATO defense chiefs in Brussels.