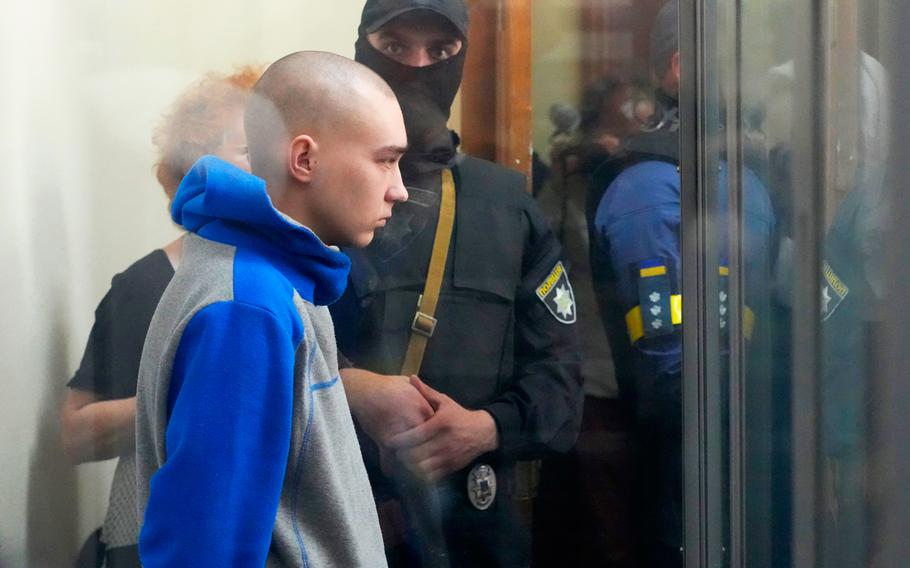 Russian army Sgt. Vadim Shishimarin, 21, is seen behind a glass during a court hearing in Kyiv, Ukraine, Friday, May 13, 2022. (Efrem Lukatsky/AP)

A Russian soldier asked the widow of a slain Ukrainian civilian for “forgiveness” in a dramatic Kyiv court session Thursday, as the trial of two other Russian soldiers began in central Ukraine.

Sgt. Vadim Shishimarin, the first Russian soldier to face a war crimes trial in Ukraine, pleaded guilty Wednesday to killing an unarmed 62-year-old civilian in the country’s Sumy region. He is facing a life sentence. Prosecutors contend that Shishimarin, 21, who appeared gaunt, violated Ukrainian laws on war crimes when he fired multiple rounds from his Kalashnikov rifle at Oleksandr Shelipov, who was pushing his bicycle near the village of Chupakhivka in late February.

A government attorney said the sergeant was part of a group of five soldiers who had fled a nearby battle in a stolen car. Shishimarin said he was ordered by other soldiers to shoot the man because the man was talking on his phone and they feared he would report their location.

“Ensign Kafurov ordered the shooting,” Shishimarin said in court, according to reports in Ukrainian media. “I refused. Then another soldier ordered me to shoot in a threatening tone, arguing that [Shelipov] would betray us. I fired a short burst.”

The family confronted Shishimarin on Thursday as he sat in a glass defendant’s cell.

In one exchange, the man’s widow, Kateryna Shelipova, asked him, “Please tell me, what did you feel toward my husband?” Shishimarin responded: “Yes, I admit guilt. I understand that you will not be able to forgive me. I ask for forgiveness for what was done.”

Shelipova went on: “What did you come to us for? You came to protect us? From whom? You ‘protected’ me from my husband, whom you killed.”

“I received an order from our command to move as part of the column,” Shishimarin said. “And what there would be beyond that, I did not know.”

Earlier, Shelipova had described the trauma of rushing to her husband’s aid and finding him dead. She identified Shishimarin as being at the scene.

Acting on orders does not absolve individual soldiers of responsibility for war crimes, according to experts. International law prohibits the deliberate targeting of civilians. It is more common to successfully prosecute lower-level soldiers than commanders or top officials, who can more easily evade capture.

“It doesn’t seem like a complicated prosecution,” William Schabas, an international law professor at Middlesex University in London, said, especially since Shishimarin has admitted guilt.

Legal experts say that so far, Ukraine appears to be following correct procedures in the trial.

The widow asked the court to impose a life sentence, the maximum punishment for those charges, but said she would support his being part of a prisoner exchange for some of the Ukrainian soldiers who are in Russian custody after their months-long defense of the Mariupol steel plant.

“I think imprisonment for life,” she said when asked for her opinion. “But if they exchange him for our Mariupol defenders . . . I will not be against it.”

The International Committee of the Red Cross said Thursday it has logged information about hundreds of Ukrainian prisoners of war evacuated from the Azovstal steel plant in Mariupol this week in a negotiated surrender. The soldiers were taken to Russian-controlled territory, and the Russian Defense Ministry posted videos on Wednesday claiming to show several hospitalized prisoners saying they were being treated well.

Ukrainian Deputy Prime Minister Iryna Vereshchuk said this week that the prisoners from Mariupol would be exchanged for Russian prisoners of war once “their condition stabilizes.” But Russian and separatist officials cast doubt on that possibility on Wednesday, with some suggesting that the Ukrainian fighters could face trial.

Under international law, prisoners of war cannot be put on trial for engaging in combat. They can be tried for war crimes, but it is unusual for court proceedings to begin while a conflict is ongoing. Doing so can be advantageous, since the evidence is fresh, legal experts said. Ukraine’s chief prosecutor, Iryna Venediktova, called Shishimarin’s trial “just a beginning in the long and complex process of bringing perpetrators before the courts and restoring justice to victims.”

“By this first trial, we are sending a clear signal that every perpetrator, every person who ordered or assisted in the commission of crimes in Ukraine shall not avoid responsibility,” Venediktova wrote on Twitter on Monday.

But politics can influence the decision to proceed with cases, Schabas told The Washington Post. Concern about hundreds of Ukrainian soldiers facing trials in Russia, where the highly politicized legal system has a conviction rate of more than 99%, may prompt Ukrainian officials to hesitate before pushing for more trials.

So far, though, there are no signs that Ukraine’s efforts to prosecute Russian soldiers are slowing. A district court in the Poltava region on Thursday heard a case on two Russian troops who were charged with war crimes for shelling civilians and civilian infrastructure in the Kharkiv region, according to a statement released Thursday by the Kharkiv regional prosecutor.

Prosecutors say the pair of soldiers operated a Russian truck-mounted rocket launcher — one man allegedly drove, while the other gunned — that fired on and struck civilian targets in the Kharkiv region.

The soldiers “fully admit their guilt,” the statement said. The next hearing in that case is scheduled for May 26.

Ukraine is investigating more than 11,000 war crimes cases, with 40 suspects so far, according to Venediktova. The International Criminal Court and the United Nations have separately started investigations into possible human rights abuses and war crimes in Ukraine.