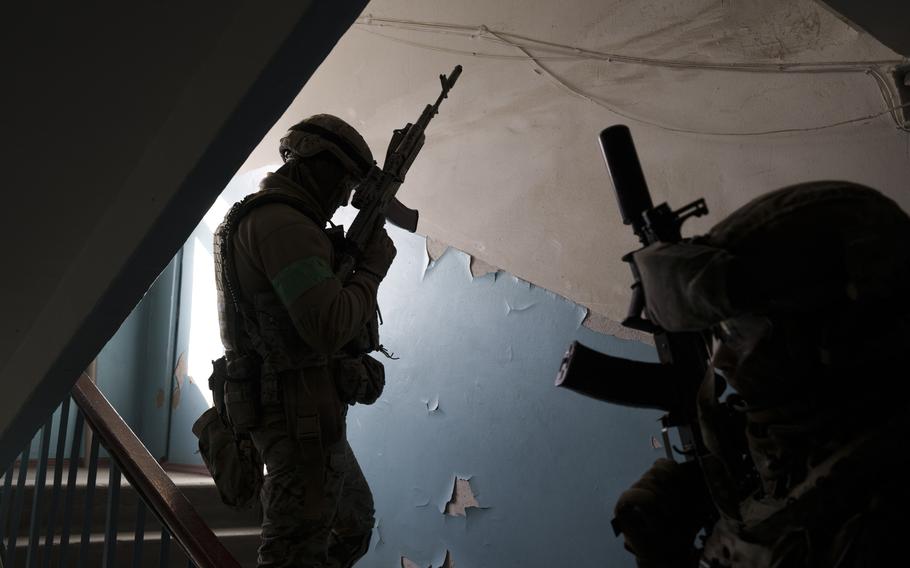 Security Service of Ukraine (SBU) servicemen enter a building during an operation to arrest suspected Russian collaborators in Kharkiv, Ukraine, Thursday, April 14, 2022. Ukrainian authorities are cracking down on anyone suspected of aiding Russian troops under laws enacted by Ukraine’s parliament and signed by President Volodymyr Zelenskyy after the Feb. 24 invasion. Offenders face up to 15 years in prison for acts of collaborating with the invaders or showing public support for them. (Felipe Dana/AP)

Ukraine’s prosecutor general said Wednesday the country would try a 21-year-old Russian soldier who is in custody, adding that he would be the first Russian service member to stand trial there on a war crimes charge in the 11-week conflict.

The prosecutor’s statement accused Vadim Shishimarin of firing several shots with a Kalashnikov rifle from a car, killing an unarmed 62-year-old resident in a village in the Sumy region of northeastern Ukraine on Feb. 28. It said the victim was pushing a bike by the side of a road before he was shot in the head and “died on the spot a few dozen meters from his home.”

The prosecutor’s office said Ukrainian investigators collected “evidence of his involvement in violation of the laws and customs of war combined with premeditated murder” and that the crime can carry a penalty of 10 to 15 years or life in prison. The statement did not provide details on the nature of the evidence or how the Russian soldier ended up in Ukrainian custody.

“Shishimarin is actually physically in Ukraine,” Iryna Venediktova, the prosecutor general, told Ukraine’s public broadcaster. “We are starting a trial not in absentia, but rather directly with the person who killed a civilian, and this is a war crime.”

Ukrainian authorities have pushed ahead with efforts to investigate alleged war crimes by Russian forces across the country, even as holding senior officials of a world power to account faces big hurdles and Kyiv has acknowledged it may be difficult to bring perpetrators to justice during a raging war.

Last month, prosecutors filed their first charges, in absentia, to Ukrainian courts against 10 Russian service members they accused of war crimes in Bucha, on the outskirts of Kyiv, where investigators uncovered evidence of torture and mutilation after Russian forces retreated. Moscow has dismissed the accusations.

The term “war crimes” has a precise definition referring to violations of international law governing conduct in combat and during occupation. They include the deliberate targeting of civilians, as well as attacks on hospitals, schools and historic monuments.

Ukrainian authorities have the primary responsibility to investigate alleged violations of international law committed on Ukrainian territory, according to some experts, although that requires a functional Ukrainian justice system, The Washington Post reported. Another avenue could be the International Criminal Court.

Prisoners of war cannot be prosecuted for taking a direct part in armed conflict, according to the International Committee of the Red Cross and Human Rights Watch. The detaining power may prosecute them for possible war crimes, and they are also entitled to legal protections.

The Washington Post’s Claire Parker and Amar Nadhir contributed to this report.