In southeast Ukraine, a stalemate in ghost villages on the front line 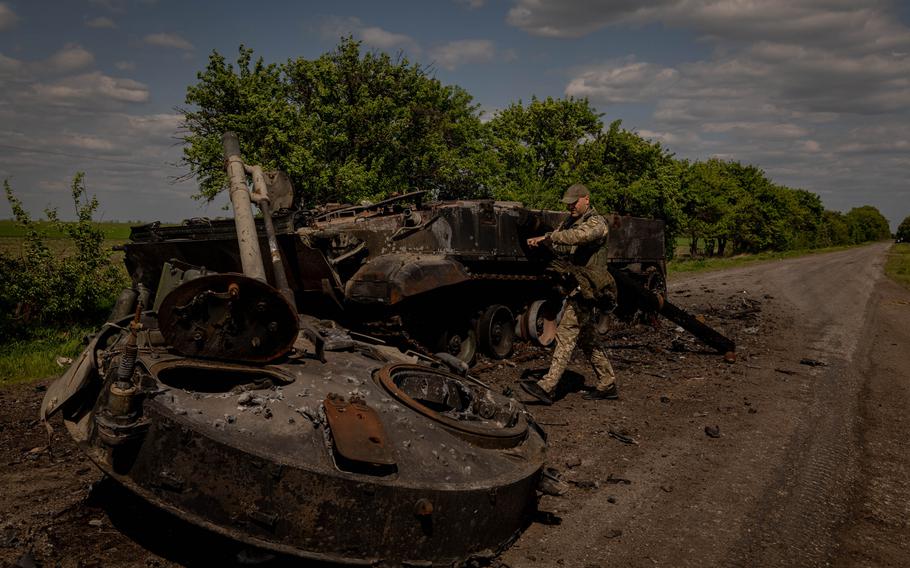 A Ukrainian serviceman is seen inspecting the remains of a destroyed Russian infantry fighting vehicle on a road near the frontline in Zaporizhzhia Oblast, Ukraine, on Wednesday, May 11, 2022. (Nicole Tung/for The Washington Post)

POLTAVKA, Ukraine — There was an air of levity on the firing range as Ukrainian Territorial Defense soldiers took their first breather from the war in weeks. One by one, they took a knee to test their rocket-propelled grenades as watching comrades cracked jokes. Others turned their faces to the sun and enjoyed a moment of calm between explosions.

“You guys don’t have long before you get back out there,” a commander reminded the group. “Rest while you can.”

Almost three months into Russia’s invasion of Ukraine, Moscow’s forces are stalled in eastern regions that President Vladimir Putin promised to “liberate.” In Donbas, which Russia no longer recognizes as part of Ukraine, Moscow’s gains have been limited. To the west near Kharkiv, it has lost territory. Here in the southeastern region of Zaporizhzhia, the front lines have almost completely frozen.

“The Russians aren’t winning and the Ukrainians aren’t winning, and we’re at a bit of a stalemate here,” the director of the Pentagon’s Defense Intelligence Agency, Lt. Gen. Scott Berrier, told the Senate last week. 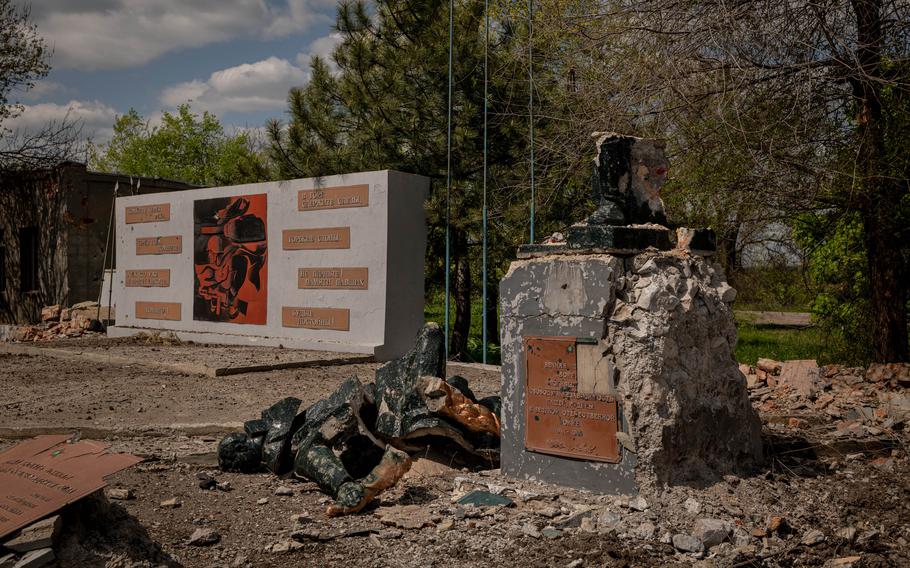 A monument dedicated to the Soviet soldiers who died during World War II is seen destroyed by shelling from approximately a week earlier, in Zaporizhzhia Oblast, Ukraine, on Wednesday, May 11, 2022. (Nicole Tung/for The Washington Post)

From their bases in the region’s small villages, Ukrainian and Russian soldiers can barely see one another. They trade artillery fire for days on end in the hope that it will suppress advances. Beneath the arcs of that crossfire, the streets are eerily quiet.

On the firing range last week, fighters traded dreams of the comforts they craved.

“Did I tell you I haven’t tasted milk in five weeks?” one of them asked his commander.

“We’ll don’t think about that now — we need you back for the fighting,” the officer barked back.

“Sure, but I’m stopping at the grocery store on my way.”

Sitting on the Azov Sea between the Donetsk and Kherson regions, Zaporizhzhia is partly occupied by Russian forces, who are now trying to advance northward. But the front lines have hardened. 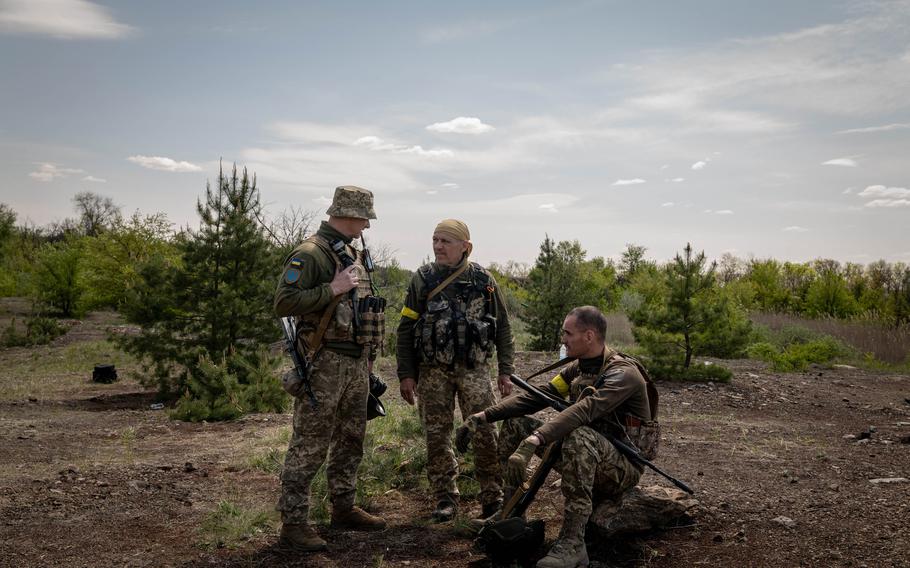 Members of a Zaporizhzhia territorial defense battalion take part in weapons training at a site in the Zaporizhzhia Oblast, Ukraine, on Wednesday, May 11, 2022. (Nicole Tung)

Analysts from the Washington-based Institute for the Study of War said Thursday that Ukrainian artillery fire on Russian forces along the western border of the Donetsk region had halted their advances toward Zaporizhzhia city.

That urban center has become a sanctuary for those fleeing. In recent weeks, thousands of civilians from across the southeast have arrived in bullet-riddled cars and battered old buses at a nondescript parking lot where volunteers register them and provide a hot meal.

“It’s the first time they know they are safe,” said Oleksiy Servitsky, a local official who oversees the process. “This region is the gateway to Ukraine.”

Most arrive from farther south, including from the Russian-occupied cities of Mariupol, Melitopol and Kherson. But others are fleeing active fighting along the Zaporizhzhia front line. 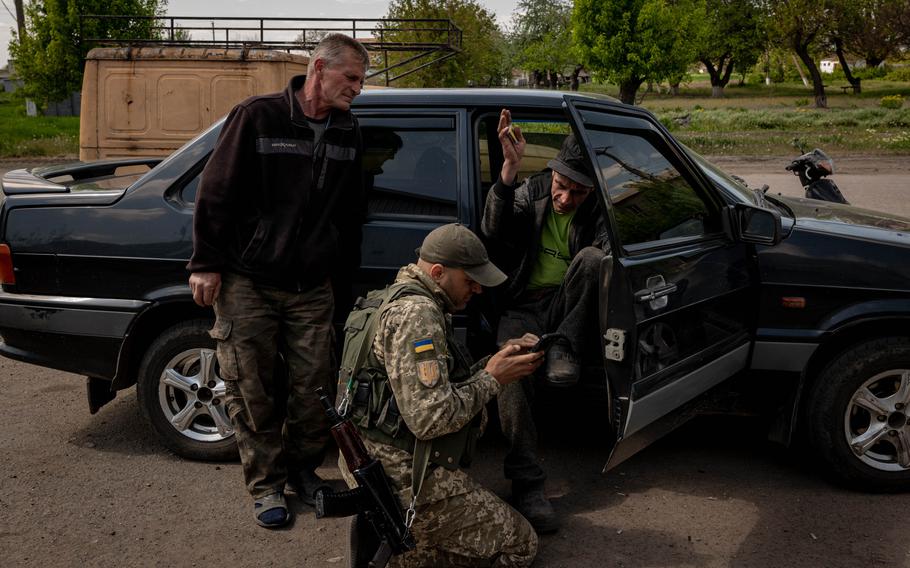 Serhiy, right, who is a farmer, waits for a food donation outside a market after he fled his village of Poltavka earlier in the day as the area came under shelling, at another village in Zaporizhzhia Oblast, Ukraine, on Wednesday, May 11, 2022. (Nicole Tung/for The Washington Post)

As reporters made their way last week to Poltavka, a village several miles from that front line, a local farmer, Serhiy, was the only civilian to be seen driving. Slumped at the wheel after a terrifying journey through active shelling, the 42-year-old looked numb with exhaustion.

“We left Poltavka this morning,” he sighed as his wife, Olha, sat tense and quiet in the passenger seat. “We were the last to leave.”

When the artillery battle intensified in mid-April and most residents fled, Serhiy and Olha faced a dilemma: leave for safety and sacrifice the farm, or risk their lives and try to save it. In the end, they sent their children to Zaporizhzhia and tried to keep the business alive. But when artillery shells began peppering the village outskirts, every week spent in the ghost town felt more futile.

“We had to sell half our pigs to get by,” Serhiy said. “Soon we’d have had nothing left.”

As he spoke, only one other civilian passed, the creak of his battered bicycle one of the few sounds in the warm spring air.

“The thing is, we didn’t have war here before — this place was meant to be safe,” Serhiy said. “We didn’t expect it to reach us so fast.” 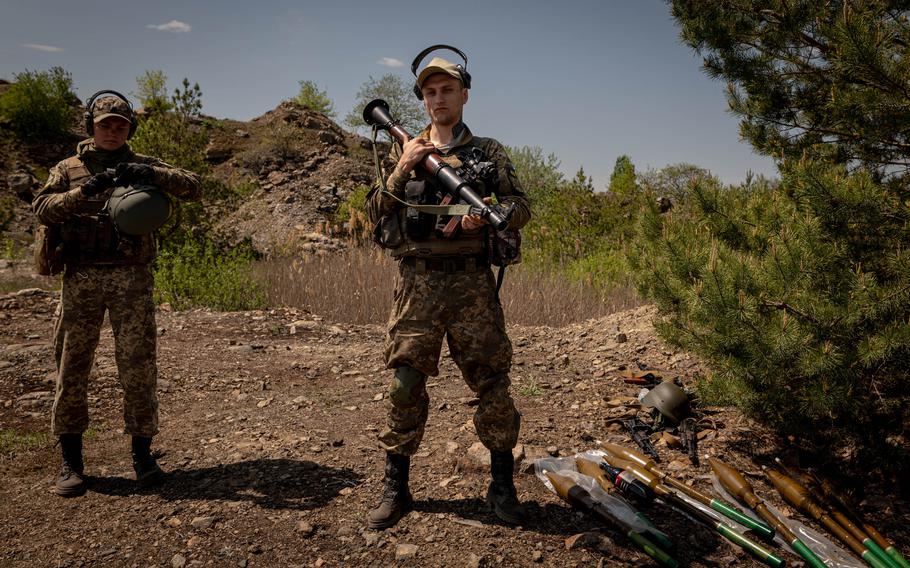 Members of a Zaporizhzhia territorial defense battalion take part in weapons training at a site in the Zaporizhzhia Oblast, Ukraine, on Wednesday, May 11, 2022. (Nicole Tung/for The Washington Post)

Along the potholed road, the perils grew clearer by the mile. Reporters saw plumes of smoke swirling upward from villages on both sides of the front line amid the slow, loud drumbeat of shelling.

In Poltavka, a black-and-copper-colored war memorial from the Soviet era lay in pieces. Several civilian homes had been shattered. In the backyards and doorways, Ukrainian soldiers were occasionally visible from the road.

In the neighborhood closest to the field that separated Ukrainian forces from the Russians, a half-dozen members of Ukraine’s Territorial Defense Forces milled around between two houses. Ilya, 21, said he had been a miniaturist before the war, painting toy soldiers. He was dressed in green fatigues now, with the national colors — blue and yellow — on his arm.

“There were children in this home, but they’re gone now,” he said, glancing over the crater where a mortar round had landed in the garden.

They both fell silent for a minute. The sounds of artillery rumbled out in the distance, and on the horizon, another plume of smoke appeared.

“This was never the job I imagined having,” Ilya said, “but we’ll stay here as long as we need to.”

Dmytro Plotnikov contributed to this report. 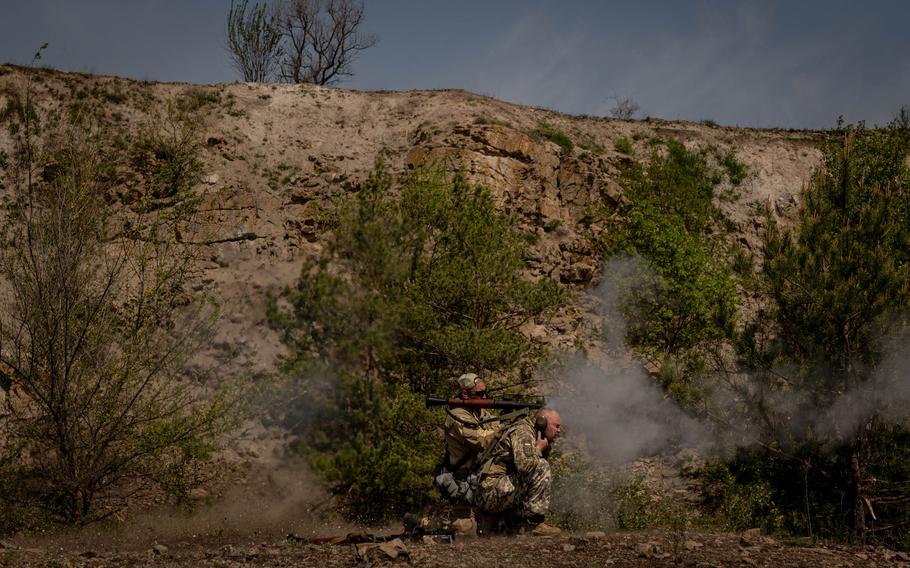 Members of a Zaporizhzhia territorial defense battalion take part in weapons training at a site in the Zaporizhzhia Oblast, Ukraine, on Wednesday, May 11, 2022. (Nicole Tung/for The Washington Post)