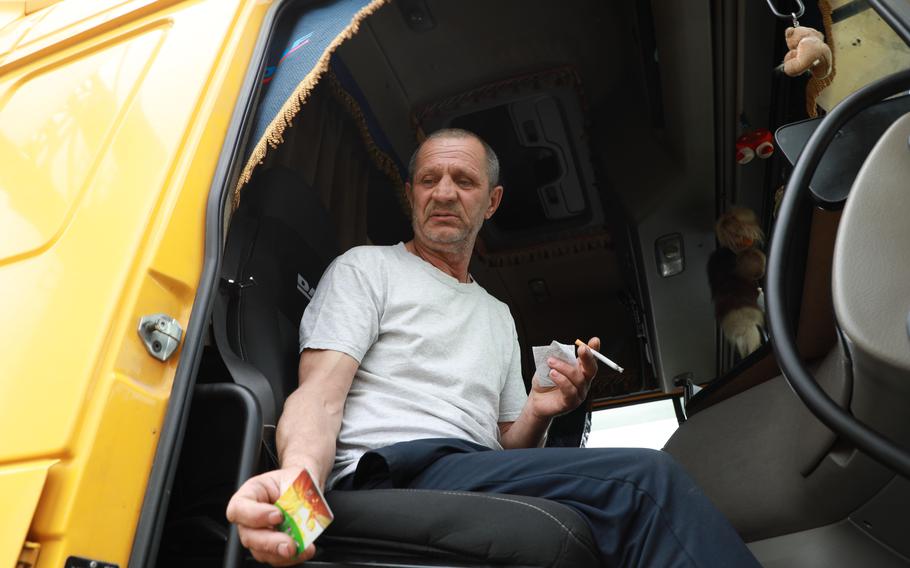 LVIV, Ukraine — As Russia's invasion of Ukraine grinds through its third month, gas shortages are spreading across the country, adding to people's misery and testing their resilience in new ways.

Lines are forming at service stations in major cities, small villages and roadside stops along the highways that stretch over the countryside. Some stations have gone dark because they have no fuel to sell. With supplies tight and limits imposed on how much people can buy, motorists are relying on apps, gas cans and persistence to fill up.

Irina Yusuchuk, 35, waited two hours in line to fill her Mercedes near her work in a suburb of Lviv. "It was really hard to find this gas station," she said. "I'm just shocked."

The shortages have spread in recent weeks as heavy fighting has shifted mostly to the east and life has started returning to something like normal in central and western Ukraine. Though Russian cruise missiles knocked out electric power and disrupted water last week, Lviv turned on the fountain in front of the opera house, cafes were busy, and people took advantage of good weather to stroll downtown, shop at an open market and ride skateboards around the Taras Shevchenko monument.

But Russian attacks on several fuel depots and Ukraine's only fully functioning refinery, in Kremenchuk, have aggravated chronic inefficiencies and vulnerabilities in the country's petroleum industry that existed before President Vladimir Putin launched the war.

"Ukraine was more dependent on imported petroleum products than it was on imported gas," said Edward C. Chow, a senior associate who specializes in energy security at the Center for Strategic and International Studies.

"When Ukraine gained its independence from the Soviet Union, there were at least half a dozen refineries that were operating," Chow said. "Over the last 30 years, Ukraine — because of its dysfunctional energy market, including an awful lot of corruption in the energy space — has bankrupted all of the refineries except the one" in Kremenchuk, a city on the Dnieper River.

He estimated that Ukraine refines only about 30% of its petroleum and imports the rest.

Now, with the Sea of Azov effectively blockaded and Odesa's port under Russian assault, Ukraine's only options appear to be trucking in petroleum and building the necessary infrastructure along those routes to handle those shipments.

"So I imagine the logistics are very difficult," Chow said. "And the Russians are, in the meantime, bombing fuel depots." 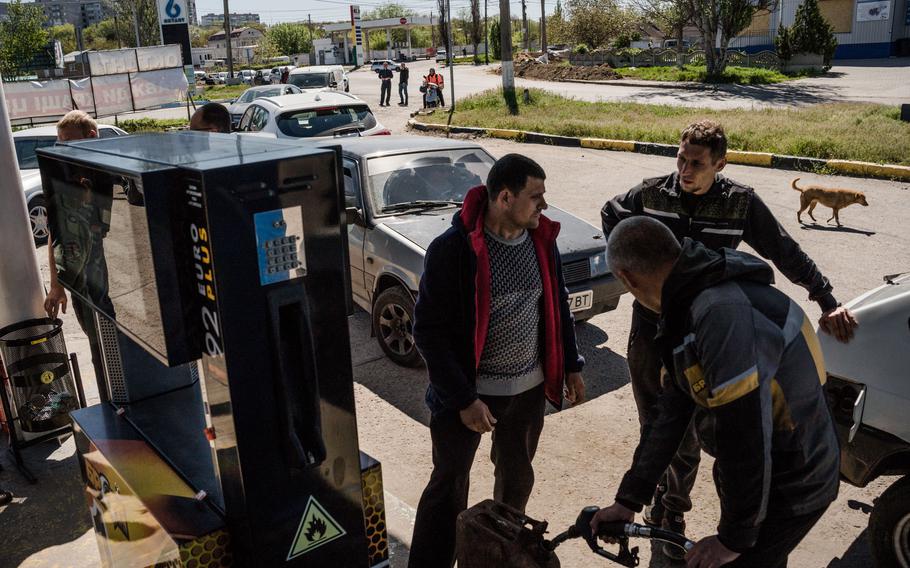 Ukraine's Economy Ministry has blamed the shortages on Russian strikes, but it has also suggested that panic buying has contributed to the scarcity.

"Of course, we understand that Ukrainians, feeling that this temporary shortage has come up, are trying [to] fill their tanks or top them off, and this frankly causes pressure," Deputy Prime Minister Yulia Svyrydenko, who heads the Economy Ministry, told Ukrainian news media. Svyrydenko said Ukrainian petroleum companies were setting up new supply routes from Poland and Romania that could ease shortages.

At a gas station on the outskirts of Lviv, a 56-year-old truck driver named Grigoriy who spoke on the condition his last name be withheld to protect relatives in Russian-occupied territory near Kherson, inched his tractor trailer up to the pumps as the attendant told him the station's supply was about to run out.

Grigoriy was running low, too, having just dumped a load of firewood. He bought the limit — 100 liters, or about 26 gallons, for a rig like his — but wasn't sure that would get him home. About 40 other cars and trucks waited in a double line behind him.

Grigoriy said he saw one of the Russian attacks that contributed to the gas shortage: an airstrike in early March on a fuel depot less than a mile from his home in Zhytomyr that sent clouds of smoke billowing into the sky.

"It was scary," he said through a translator.

Now, almost as soon as he leaves one gas station, he's looking for the next, juggling fuel cards issued by different petroleum companies that allow customers to buy fuel in advance at a set price. There are apps, too, that work in a similar way. Since the war began Feb. 24, the cards have been used to limit how much fuel can be purchased by the holder at any given station per day. Some gas station chains have made them available only to small businesses or special customers. 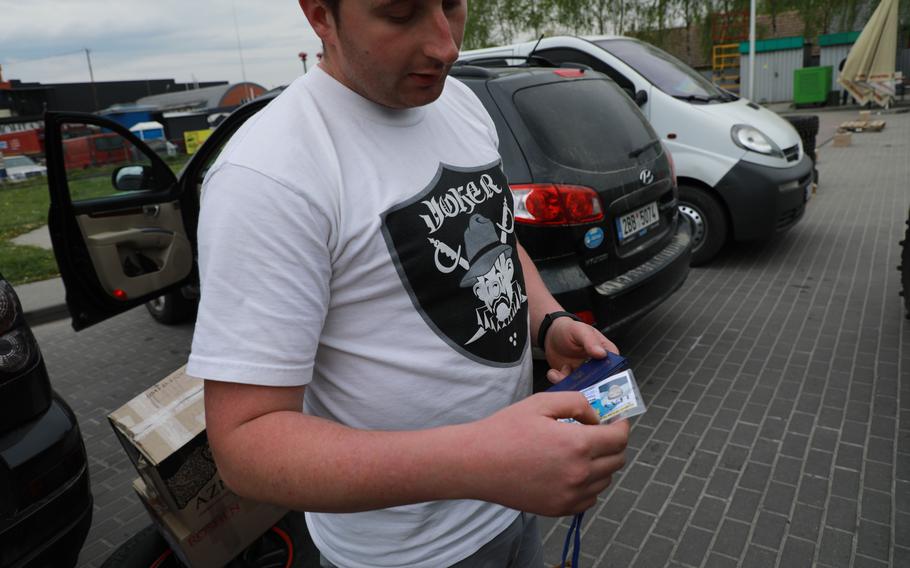 The gas station chain WOG limits customers to 10 liters per day — about 2.5 gallons — with its app, but with the fuel card, it's possible to get 40. Policies differ by company, and Grigoriy said it can be tricky keeping track of them all.

Several volunteers with Ukraine's State Emergency Service were making a pit stop with a black SUV ferrying crates of fruit, cartons of cigarettes and personalized care packages sent by families to soldiers on the front lines.

The volunteers' credentials allow them to purchase as much fuel as they need. Sometimes other motorists chip in. They pack reserves in gas cans for the long, often overnight trips.

On one run to the Donbas region, Ivan, 48, said he almost ran out of gas after Russian shelling forced him to shift an intended meeting point by 100 kilometers, or about 60 miles. He had only enough gas to travel 20 kilometers. As air raid warnings sounded, gas stations closed, leaving him no choice but to sleep in his car at a station until it reopened.

"We are constantly spending the night in cars," he said. Volunteers with Ukraine’s State Emergency Service may buy as much gas as they need. (Fredrick Kunkle/The Washington Post)

Taras Myts, a taxi driver in Lviv, said he lost two full days of work when the gas gauge on his Volkswagen Polo hit "E." He refueled his cab using gas cans and started hunting for a service station with fuel. Using an app that's supposed to find stations with gas, Myts, 26, cruised two stations that were dry before lucking out at a WOG near the city center.

He said things could be worse. He was aware that gas shortages are more acute in central and eastern Ukraine, where the fighting has intensified. And he's glad that some cautious sense of normalcy has returned to Lviv.

"In the early days, there was panic," said Myts, 26. "It's a little easier now because people have gotten used to living with it."

The Washington Post's Marta Boyakivska and Serhii Korolchuk contributed to this report.