On an unexpectedly subdued Victory Day, Ukrainians see cause for hope On Victory Day, May 9, when Ukrainians and Russians remember World War II fallen, the Glory Memorial in Kharkiv, Ukraine, is a scene of peace. The day saw the least shelling in Kharkiv since the current conflict began. (Wojciech Grzedzinski/The Washington Post)

KYIV, Ukraine — The day on which many here feared that Russia would escalate its assault on Ukraine turned out to be very different.

Instead of formally declaring war, annexing occupied areas or increasing bombardments, as many had expected, Russian President Vladimir Putin didn't even mention Ukraine by name in his speech Monday commemorating the Allied triumph over Nazi Germany in World War II.

Victory Day — when Russians and Ukrainians alike remember the millions of Soviet soldiers who lost their lives in that fight — was observed in a more somber and subdued way both in Moscow's Red Square and across much of Ukraine, where it was the quietest day of the war so far.

Monday morning saw the least shelling in Kharkiv — Ukraine's second-most-populous city — since the conflict began 75 days ago, according to the regional governor, Oleh Synyehubov.

Ukrainian troops have been pushing back Russian battalions in Kharkiv over the past of couple weeks as Moscow redirects its invasion to focus on areas farther east.

Russia's retreat from areas around Kyiv more than a month ago, and Kharkiv more recently, has given many Ukrainians reason for hope, even as Russia consolidates control over large parts of the eastern and southern regions of Donetsk, Luhansk and Kherson. In Kharkiv, restaurants were open, though their backdrop was a downtown where most businesses are damaged from more than two months of near-constant shelling. 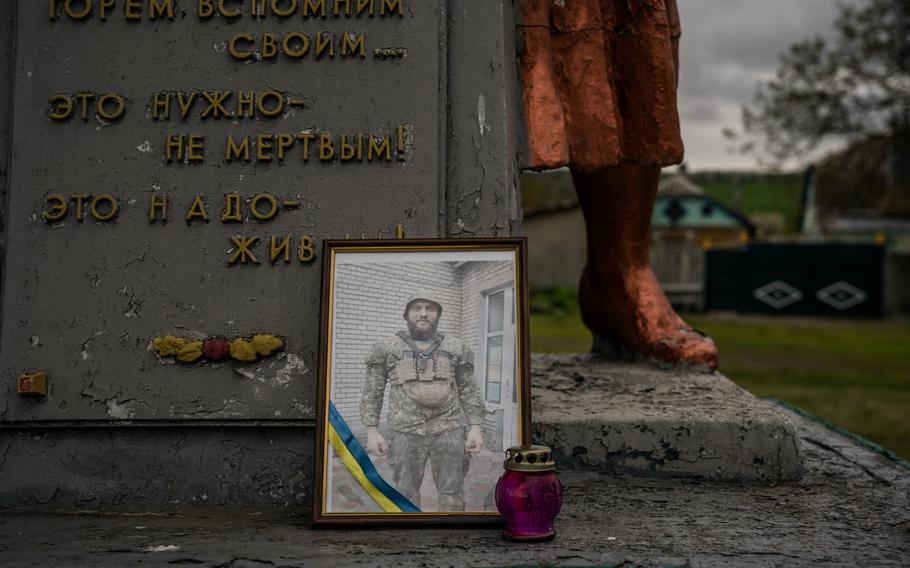 A picture of Ruslan Siksoi, killed near Izyum on April 13, 2022, stands on the World War II monument in Berezivka, Ukraine. Visits to memorials were discouraged because of the danger of attacks. (Wojciech Grzedzinski/The Washington Post) Nikolai Manailo, 99, a veteran of World War II, raises a glass in Nadtochii, outside Kharkiv, Ukraine, on Victory Day. He says he wishes it were possible for the two sides to sit down over a drink and sort out their differences. (Wojciech Grzedzinski/The Washington Post) 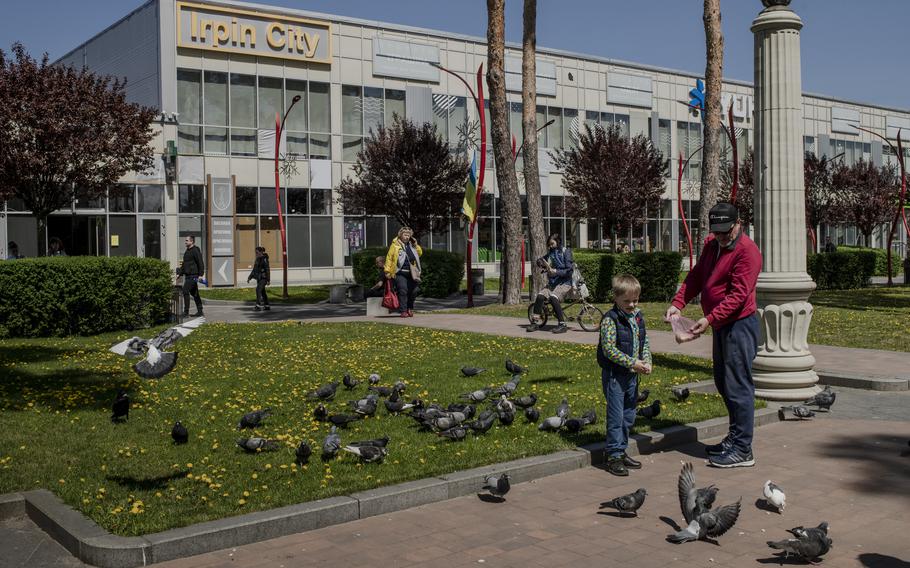 People near the World War II memorial in the town center of Irpin. Across Ukraine, Victory Day was the quietest day of the war so far. (Kasia Strek/Panos Pictures/The Washington Post)

"This day is even more symbolic for us because we're expecting our own victory — and not just the victory of our ancestors," Synyehubov said.

Nearer to the front lines in the Donetsk region, relative calm also prevailed — at least through the morning hours.

Few cities sounded their air-raid sirens overnight. In the town of Lyman, where fighting has raged in recent weeks, civilians used the relative quiet to make frantic dashes to the armored evacuation buses organized by the regional government.

"We waited weeks for this," said 70-year-old Volodymyr Yutin. He was evacuated to a hospital in the Donbas region with his 94-year-old mother, Katerina, her small frame wrapped in a blanket on a stretcher.

But their escape brought them little joy. They had not heard from Yutin's daughter, Daria, since April 24.

"Her husband's last text message said that they were in a basement, and they had food," Yutin said. He turned away for a moment as his eyes filled with tears. "I hope they're alive."

As the day wore on, fighting flared again. On the road between Kramatorsk and Lyman, reporters saw thick plumes of smoke, and rescue workers said it was getting harder to enter the town.

"There are a lot of civilian casualties in there," said Vitaly Verona, who heads Lyman's rescue service. "Russia just wants to flatten everything."

Among the casualties were Ukrainians of Russian origin who had stayed put in their homes because they didn't think Moscow's forces would harm them. 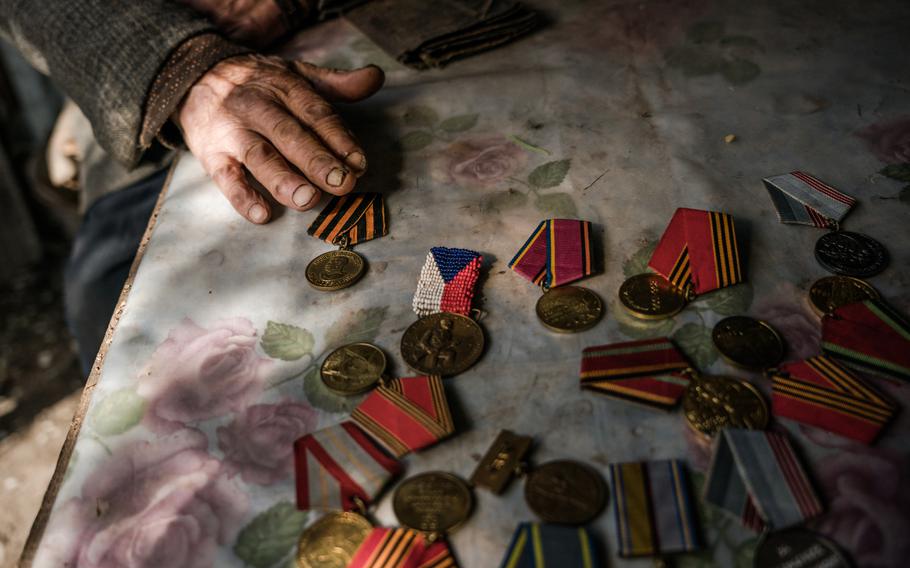 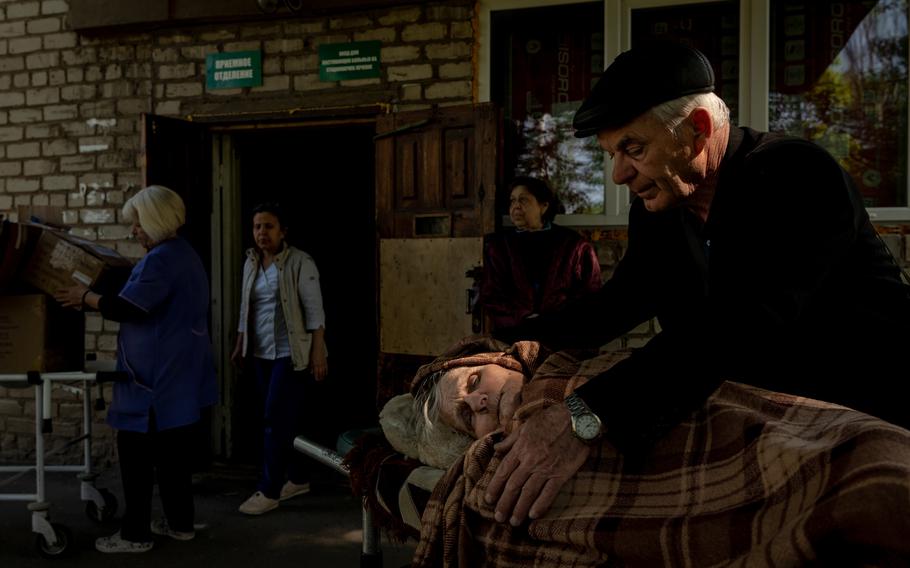 Volodymyr Yutin, 70, comforts his mother, Katerina, 94, at a hospital in Donbas after they were evacuated from the town of Lyman. (Nicole Tung/The Washington Post) In a hospital in Donbas on Victory Day, Ludmila Krivanos recovers. She and her husband were injured in a Russian strike near their home in Drobysheve. (Nicole Tung/The Washington Post)

Lying anguished in a Donbas hospital bed, Ludmila Krivanos said she had ignored her adult children's pleas to leave the Lyman area, telling them she could carry on with her normal life when the shelling died down.

On Monday morning, she was thrown across her kitchen by a blast. When she heard her husband, Nikolai, screaming for help, she found that her legs would not move from underneath her.

"I crawled to him and all I could see was blood," she said. "We are Russians, we speak Russian. We never thought the Russians could do something like that to us."

In a nearby town, Nikolai Manailo, a 99-year-old World War II veteran, opened a bottle of champagne for Victory Day. A native of Kharkiv, he once fought alongside Russians.

"Who could've believed this could happen?" Manailo said quietly. He wished the two countries could just sit down at a table and sort out their differences over booze.

There were Victory Day events in Russian-occupied areas, too, but they were muted. Rumors had circulated for days that the Kremlin would organize major events such as a triumphal parade in Mariupol, where Russian troops have taken near-total control, or announce the annexation of more of Ukraine.

"I hope this misunderstanding will end soon," an unidentified veteran in Vovchansk, near Kharkiv, his blue uniform smothered in medals, told the RIA Novosti news agency.

Commemorations in Ukraine were limited by martial law, which prohibits large gatherings.

At Kharkiv's main World War II memorial — the statue of the grieving "Mother of the Motherland" — police officers checked the passports of everyone who arrived to lay red flowers.

City officials warned residents against visiting World War II monuments on Monday because of the higher risk of attack by Russia, but they didn't prohibit it. The officers told the few visitors to keep it quick — no more than five minutes. Similar restrictions were in place in Kyiv and cities across the country.

The Kharkiv memorial was damaged by Russian artillery shelling earlier in the war, leaving craters in front of the statue and damage to the face of a sculpture in front of the park complex. A Holocaust memorial nearby was littered with cluster munitions.

Ukraine was devastated by World War II. Kharkiv was occupied by the Nazis for more than two years. In his Victory Day address, Ukrainian President Volodymyr Zelensky said 8 million Ukrainians perished in the war — about 20 percent of the population at the time.

Zelensky likened Putin to Adolf Hitler, saying the Russian leader was "following Nazi philosophy, copying everything they did." He predicted Ukraine would prevail in the current conflict.

"Very soon there will be two Victory Days in Ukraine," he said. "And someone will not have even one left."

That optimism is mirrored in Kyiv's suburbs, where locals are beginning to rebuild after spending a hellish March under the occupation of a particularly brutal Russian regiment.

At a bullet-scarred Ukrainian Orthodox church whose yard served temporarily as a mass grave, the Rev. Andriy Halavin said that so far Victory Day had passed like any other.

"We do not have this cult of victory as they do in Russia," Halavin said. "They, for some reason, believe that everything great and important happened long ago, and now they go forward but their heads are still turned back."

Ukrainians mark the end of World War II in Europe with solemnity befitting a tragedy that befell many peoples around the world, without glorifying the result, Halavin said.

"When we remember the past," he said, "we pray for all those people who died, whether in this war or in the Second World War."

The Washington Post's Khurshudyan reported from Kharkiv, Loveluck from Kramatorsk, Stern from Mukachevo and Kunkle from Bucha.