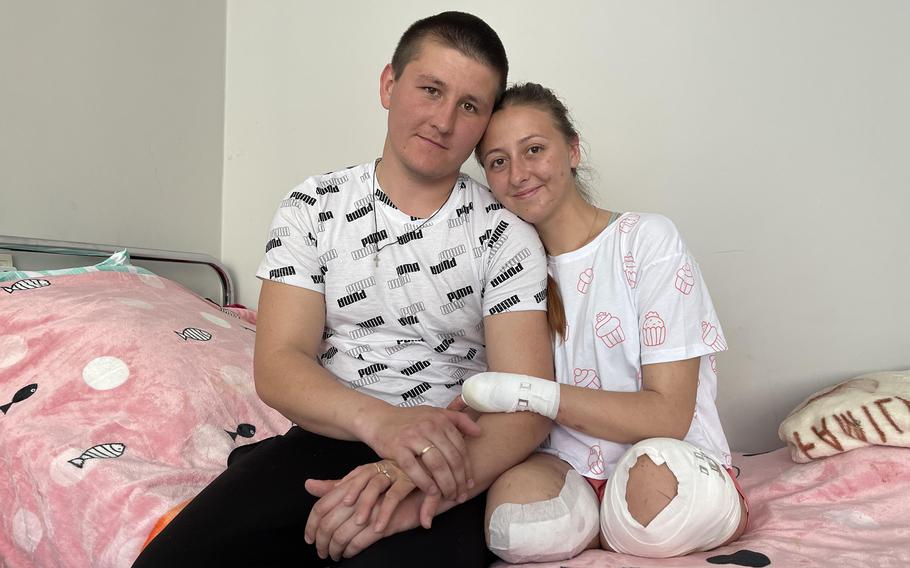 Oksana Balandina), who lost both legs to a mine, danced with her new husband, Viktor Vasyliv, at their hospital wedding in Lviv, in western Ukraine. (First Medical Union of Lviv/TNS)

LVIV, Ukraine (Tribune News Service) — In the video’s opening frame, the first glimpse of them, it could almost be any bride and groom. Any wedding dance, if a wartime one.

The setting is a hospital ward. The bride wears a garland of pink-and-white blossoms and a short white dress with spaghetti straps and a flaring skirt. The groom, his dark hair cropped close, is in a blue T-shirt and dark trousers.

In the first, partial view of the two of them entwined, beginning their slow dance, it is not immediately obvious that she has no legs. Then, as they move fully into the frame, it becomes suddenly, shockingly clear that he is holding his new wife up entirely, cradling her as the white dress swirls around emptiness.

Ukraine has for weeks been following the story of this pair, who were married Monday in the Lviv Surgery Center in this western city, according to hospital officials.

News reports have detailed how Oksana Balandina, a 23-year-old nurse from Lysychansk, in the eastern province of Luhansk, lost her legs and four fingers March 27, a little more than a month into the war, in a land mine explosion. She stepped on some ordnance as she and her now-husband, construction worker Viktor Vasyliv, were walking home. He was unhurt, the news accounts said. Oksana Balandina (right), who lost both legs to a mine, danced with her new husband, Viktor Vasyliv, at their hospital wedding in Lviv, in western Ukraine. (First Medical Union of Lviv/TNS)

After initial treatment at a local hospital, involving several surgeries, Balandina was taken to the front-line city of Dnipro for more medical care that included preparation for prosthetics. A week ago, she and Vasyliv arrived in Lviv, a city less than 50 miles from the Polish border that comes under occasional attack but has largely served as a haven for those fleeing violence elsewhere.

There are no reliable figures on the number of people killed and maimed in this war, now in its third month. The United Nations High Commissioner for Human Rights had confirmed 2,899 civilian deaths as of Thursday, 210 of them children, and 3,235 people injured. As always, the office emphasized that the true numbers were likely higher.

Individual places are thought to account for many times that official total; in the besieged port city of Mariupol, municipal authorities have said an estimated 20,000 people have died. Satellite imagery has detected what appear to be at least three mass graves on the outskirts of the city, which is largely cut off from the outside world.

Through it all, Ukrainian couples still marry, though forgoing the customary large nuptial gatherings. Most plan to do their celebrating once the war is over.

Balandina and Vasyliv are a longtime couple with two children who had already had a common-law marriage before Monday’s civil ceremony at the Lviv Surgery Center. There were no family members present — just patients and volunteers.

In the 49-second video, posted by the hospital on social media with the couple’s permission, the two dance to slow guitar music. Her arms encircle his neck, and her bandaged left hand rests on his shoulder blade. Onlookers clap from their wheelchairs.

The newlyweds sway together, faces buried in each other’s neck. At one point, what sounds like a heavy sigh escapes the groom.

Someone keeps up a cheerful narration, exclaiming: “First dance!” He kisses her lightly, and the onlookers, wanting more, chant a traditional local wedding toast: “Bitter! Bitter!” — a nod to the maxim that, if something is bitter, a kiss will sweeten it. So they kiss again, first hesitantly, then deeply.

All the while clinging to each other, as the music plays on.