OZERA, Ukraine — The sun had broken through the clouds as Nadia Voznenko, a black scarf tied around her head, stepped over trash left by Russian soldiers to receive the body.

She recognized the vehicle waiting at her shrapnel-pocked home. It was a delivery truck once driven by her son, Andriy, now transformed into a makeshift hearse. Voznenko's eyes locked on the casket wrapped in dark cloth. It would remain closed to conceal the signs of torture.

"My sonny, my dear!" she cried. "My God!" Her screams echoed inside the truck.

Voznenko walked back to her front door, then back to the truck, again and again, four times in all, as if she could forestall the inevitability of the moment. Her daughter Valentyna held her up by one arm. A white van drove by a growing crowd of mourners across the street, drawing whispers as it headed toward the church cemetery.

The neighbors formed a procession behind Voznenko's family and walked down Mykhailivska Street, on their way to bury 43-year-old Andriy a second and final time. 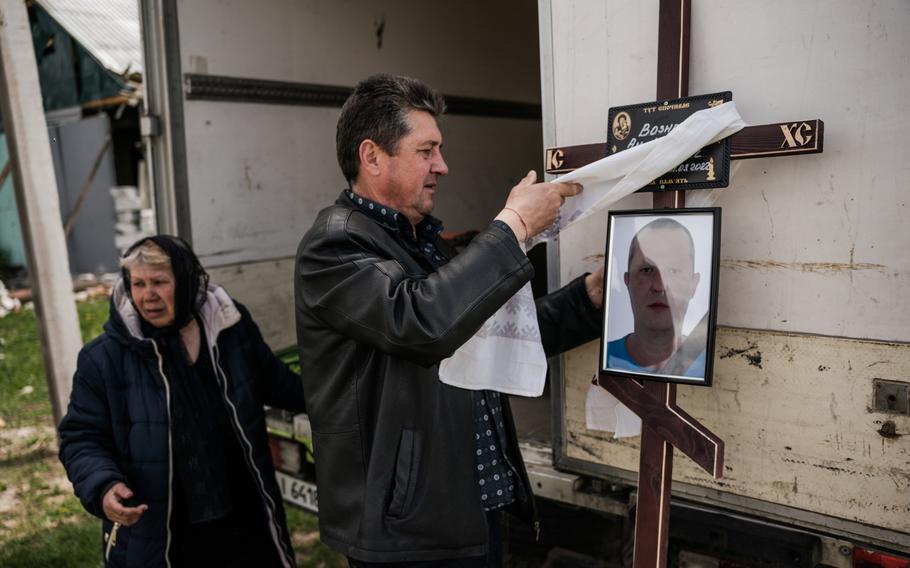 The dead left to decompose in the streets and in houses were often buried in hastily dug graves by people who were complete strangers. That had an unintended consequence: There was no way to contact the families to tell them which garden or random patch of earth held their loved ones.

But now, after exhumation of hundreds of bodies, exhaustive documentation by war crimes investigators and impromptu information sharing among neighbors and others, families are finding their missing, and the deceased are making their journeys home. Some are receiving their first dignified burials.

Last Wednesday, a day before Andriy's funeral, crows drawn to the smell of the dead congregated in a tree outside the morgue in Bucha. Bodies lay stretched on stained gurneys on the ground. Others were in a refrigerated truck parked nearby. People stood for hours waiting for their names to be called.

Finally, it was Andriy's turn. His brother-in-law, Volodymyr Chayka, peered into a long bag that had been brought to the rear of the truck. He stared at a thrashed and partly decomposed body, which had been exhumed from a grave in a neighboring village in mid-April. He didn't recognize the face, though he had known Andriy since he was a teenager. The skin had a sheen that looked more like plastic. But the eagle tattoo on the chest was what he needed. It was Andriy. Andriy’s casket is lowered into the ground on Thursday. (Wojciech Grzedzinski/The Washington Post)

Chayka drove the 20 minutes back to Ozera to deliver the news, then returned to the morgue. One man complained that he had been waiting weeks to take his son's body. Another man, distraught, tugged at the door handle. It was locked.

"Try to knock on the door," Chayka said jokingly. "Who knows, maybe luck will smile at you."

There are differing theories as to why Andriy was abducted, but they both stem from the same basic premise: He was too visible.

Stout and brown-eyed, he was a divorced father who delivered fish in his truck before the invasion. After Russian troops entered his tiny village on Feb. 25, the truck became something of a lifeline for the community. A friend, Ivan Boiko, said Andriy gave fresh vegetables to families afraid to leave their homes. And in one tense trip early in the occupation, he spirited Boiko's family to a safer neighborhood on the outskirts of Kyiv.

Soon he became more active in the civilian resistance. Andriy documented the positions of Russian vehicles throughout the area, including where enemy artillery pieces were firing, and passed the information to Ukrainian officials. "Not everybody had the courage to get out of their basements and walk the streets," Boiko said.

Being outside more often than most people in Ozera may have raised the soldiers' suspicions, and those may have been further heightened when Andriy was injured by shrapnel during a mortar shelling, Boiko said. Andriy's sister thinks he was going to get medical attention when the soldiers saw him bleeding. They started to help him — until they saw the tattoo on his chest. Given all the Russian propaganda that Ukraine was rife with Nazis, she wonders whether they thought he was an extremist.

On March 21, neighbors spotted the troops leaving the village with Andriy. Nine days later, in the nearby town of Zdvyzhivka, a local looked behind a house where the Russians were staying, laughing and drinking into the night. Two bodies had been dumped on the edge of the woods. He went back the next day to find three more.

All were bound and executed, Eugeniy Pohranichny said. Andriy, who had been shot multiple times, was among them.

After the Russians withdrew from the area, Pohranichny said, he buried the bodies at a nearby cemetery with the help of a priest. The priest sent several photos to Boiko, who confirmed that Andriy was one of the dead men. 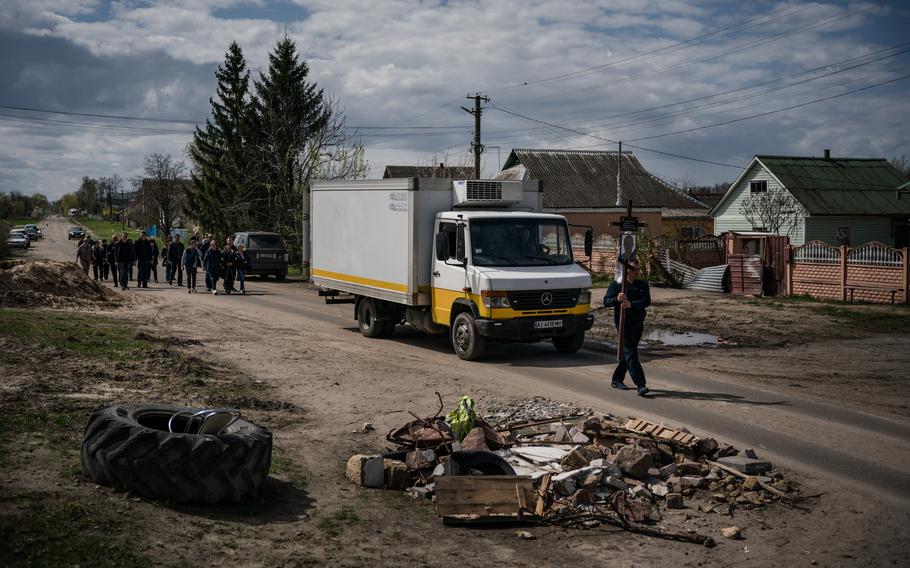 The funeral procession for Andriy Voznenko heads to a church cemetery in Ozera, Ukraine, where he will be buried for a second time. (Wojciech Grzedzinski/The Washington Post)

His body was exhumed on April 11. Yet it would take 17 more days for him to return home, steps away from where his mother had pleaded with him to stay to avoid Russian entanglements. Over and over, she asked a single question before his casket made its way to the church.

"Why didn't you listen to me?"

Mourners gathered behind the Voznenko family, listening to the priest explain the cruelty of the moment.

"It is natural for children to support their parents and to bury their parents. When it happens vice versa, it's a great pain," he said. "This is incomprehensible, and may God not make anyone bury their own children."

He splashed holy water on the casket before it was lowered into the ground, with everyone gathered tossing three handfuls of soil into the grave. His relatives didn't have a vase; a soda bottle cut in half sufficed as a vessel for the daffodils and other flowers they placed on the fresh mound.

The family made the short walk back down Mykhailivska Street. Adjusting to Andriy's absence has been hard. His sister lives in Kyiv and cannot easily make the drive if her mother needs help.

They sat at a long table for a lunch of borscht, smoked meat, sauteed mushrooms and potatoes. They downed shots of Ukrainian-made vodka. A shot for Andriy, poured into a blue and yellow glass, went untouched.

His mother stared at the table, contemplating her new responsibilities now that her son was home.