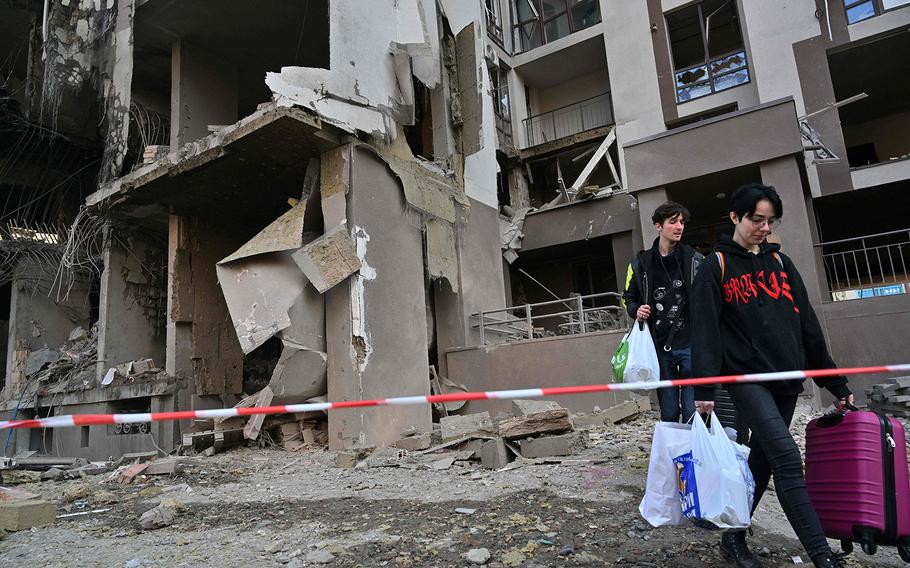 Residents carry their belongings as they leave their damaged building following Russian strikes in Kyiv on April 29, 2022, amid Russian invasion of Ukraine. (Sergei Supinsky/AFP via Getty Images/TNS)

Russia reported nearly 400 artillery strikes overnight and early Saturday, mainly in the eastern battle zone. It described the targets as military ones, but Ukraine says residential areas, including the northeastern city of Kharkiv, are being ravaged.

At the same time, the Kremlin redoubled efforts to blame the West for the devastating war that is now in its third month. The Russian invasion has killed thousands of people, left whole swaths of cities in ruins, and turned more than 5.4 million people into refugees.

Moscow’s top diplomat, Foreign Minister Sergei Lavrov, was quoted Saturday as saying that a flood of weaponry from NATO allies was “pumping up” the battle. But at the same time, in remarks to official Chinese media that were reported on the ministry’s website, Lavrov insisted that Washington and its European allies were “absolutely indifferent” to Ukraine’s fate.

President Volodymyr Zelenskyy, in an overnight video address to the nation, accused Russia of scorched-earth tactics in two large eastern provinces known together as the Donbas, where the fighting is concentrated. Moscow already had a foothold in two small separatist statelets before the war, but is seeking to seize the entire region.

Nowhere is that clearer, the Ukrainian leader said, than in Mariupol, the besieged southeastern port city that he described as a “Russian concentration camp” among the ruins.

Russian President Vladimir Putin claimed victory in Mariupol more than a week ago, saying Moscow’s forces control the city, but Ukrainian forces and civilians remain holed up in a giant steelworks complex in increasingly desperate conditions.

Russia is blockading and bombarding the sprawling compound, from which black smoke could be seen rising on Saturday.

Videos posted from inside the warren of tunnels and bunkers under the plant have shown ill and injured women and elderly people, distressed-looking children, and infants wearing diapers fashioned from plastic garbage bags. Online videos also showed gruesome untreated injuries suffered by some troops defending the plant.

Ukrainian authorities were trying to arrange civilian evacuations Saturday from Mariupol and other particularly dangerous parts of the battle zone, but such efforts have repeatedly broken down, with Russian troops accused of firing on those fleeing.

The mayor of the eastern town of Popasna said Saturday that a day earlier, two buses on their way to ferry evacuees had been shot at, and contact with the drivers had been lost.

European governments have repeatedly signaled concern over the deteriorating conditions for civilians in the east, particularly in Mariupol. On Saturday, French President Emmanuel Macron, who handily won reelection less than a week ago, told Zelenskyy by phone that France would increase both military and humanitarian assistance, Macron’s office said.

As fighting raged, the latest conflict assessment from British military intelligence, released early Saturday, depicted Russian forces as facing some of the same difficulties that prompted Moscow to break off an earlier bid to seize the capital, Kyiv.

The Russian military command is merging and redeploying “depleted and disparate units from the failed advances” in the country’s northeast, said the report, adding that many of these units were likely suffering from poor morale. It also cited inconsistent air support and a “lack of unit-level skills.”

Another new analysis, from the Washington-based Institute for the Study of War, or ISW, said Ukrainian forces were “successfully slowing” Russian attacks in eastern Ukraine. Moscow’s forces made limited advances west of the city of Severodonetsk, the analysis said, but remained “stalled” at a strategic bottleneck, south of the city of Izyum.

Both assessments echoed observations made by the Pentagon, where a senior official said Russia’s push south from Izyum was gaining only “a few kilometers” a day.

Western analysts have suggested nimble battlefield tactics could help Ukrainians inflict significant losses on the Russians, as they did when Kyiv was under threat. The front lines are fluid in places, with Ukrainian forces “conducting a maneuver defense rather than holding static positions,” the Institute for the Study of War assessment said.

Neither side has made a practice of regularly releasing updated information about battlefield deaths. Ukraine has been somewhat more forthcoming, acknowledging a significant number of dead and wounded among its own troops. However, Zelenskyy adviser Oleksiy Arestovych on Friday described Russian losses as “colossal.”

In an apparent effort to avoid further troop losses, Russia has been aiming withering artillery fire all across the east. In Moscow, the defense ministry on Saturday reported hitting 389 targets, saying those included troop concentrations, weapons caches and fuel depots.

Ukraine has acknowledged that hits on fuel depots and refineries is causing a fuel crunch. Long lines of cars and trucks have been forming at gas stations in various parts of the country.

Zelenskyy said in his overnight address that stepped-up shipments from allies and other measures were expected to ease the shortages in the next week or two, but Ukrainian officials in the meantime asked citizens to avoid unnecessary travel in private vehicles.

“Remember the needs of the army,” exhorted an official Ukrainian government communique on the Telegram messaging app.

King reported from Lviv and Wilkinson from Washington.