Lethal darts were fired into a Ukrainian neighborhood by the thousands 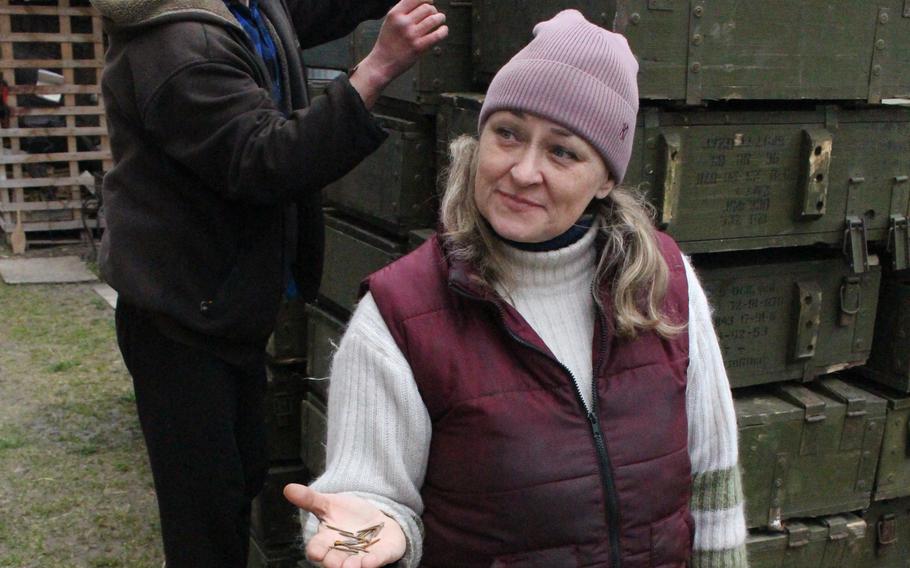 BUCHA, Ukraine — At Svitlana Chmut's house outside Kyiv, there are carrots in her garden and deadly Russian mini-arrows in her yard.

A pile of the sharp, finned projectiles rounded up by Chmut are now gathering rust in the spring's fine mist. She combed her walled courtyard for them, she said, after a Russian artillery shell carrying them burst somewhere overhead days before the Russians withdrew late last month, seeding the area with thousands of potentially lethal darts. Some were embedded in the tarp that covered her vehicle, as if someone nailed them to her car.

"If you look closely on the ground around my house, you will find a lot more of them," said Chmut, 54.

These projectiles, called fléchettes, are rarely seen or used in modern conflict, experts have said. Many landed in the street in the strike, Chmut said, including some observed by Washington Post reporters, among fields of gear and the occasional liquor bottle or chocolate bar abandoned by retreating Russian soldiers.

At 3 centimeters in length, these fléchettes look like tiny arrows. They have a long history in war — a version of them was dropped from airplanes in World War I and used by the U.S. in Vietnam — but are not in common use today. Shells packed with fléchettes are primed to explode over infantry formations and spew projectiles in a conical pattern, with some versions dispersing fléchettes across an area three football fields wide. 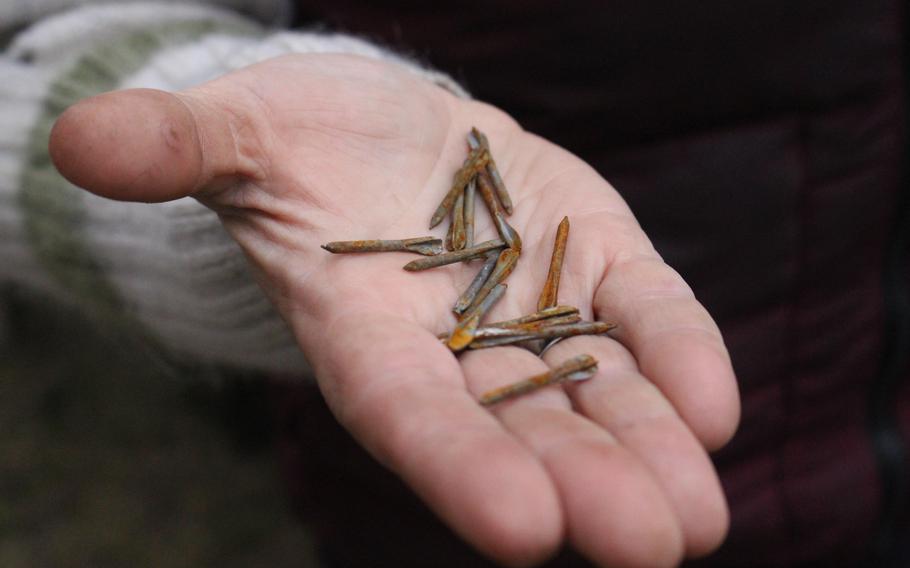 Chmut found the projectiles in her car the morning of March 25 or 26, she said, after a night of intense shelling on both sides. It's not clear if the Russian shell wounded their own troops. The soldiers set up artillery positions and parked tanks in yards near Chmut's home but would move into civilian houses at night, she said. Flechettes would not pose a danger to people inside buildings.

Fléchettes are narrowly shaped to achieve aerodynamic stability and with simple, nail-like manufacturing in mind, said Neil Gibson, a munitions expert at the U.K.-based Fenix Insights group. The fléchettes recovered from Chmut's yard likely came from a 122 mm 3Sh1 artillery round, he said, which is among a few Russian munitions that carry the projectiles.

Gibson has reviewed photos of those artillery rounds left behind by Russian troops but has not seen their documented use in Ukraine, he said. Maj. Volodymyr Fito, a spokesperson for Ukrainian land forces command, said the Ukrainian military does not use shells with fléchettes.

Some human rights groups have decried the use of fléchettes because they are indiscriminate weapons that can strike civilians even if they are aimed at military formations. They are not banned by international conventions, but "they should never be used in built-up civilian areas," Amnesty International has said.

Fléchettes drew wide concern in the 1970s among international organizations but have mostly avoided bans because they were not used en masse in conflicts after the Vietnam War, when the focus turned to cluster and incendiary munitions, international relations professor Eitan Barak wrote in his book "Deadly Metal Rain."

The exception, Barak notes, is the Israeli use of fléchettes in the Gaza Strip. Israel began phasing out tank rounds with the projectiles in 2010, two years after soldiers fired a fléchette-packed salvo at a Reuters cameraman when they mistook his camera for a weapon, killing him along with eight civilians.

It is already illegal to target civilians, and the irregular fragmentation of a typical artillery shell probably causes more damage to a body than fléchettes, which produce wounds closer to gunshots, Gibson said. They are also generally less useful, he said, because they are mostly appropriate for specific circumstances, like striking troops in the open gathered across a large area.

Bucha, which has seen some of the gravest atrocities committed by Russian forces, was devastated by shelling throughout Russia's failed bid to take the capital, including in Chmut's neighborhood, when acrid smoke and gunpowder overpowered the senses.

"Everything around us was burning," she said. "There was no fresh air, and you could not see the sun."

Enemy troops soon swarmed Chmut's neighborhood, raiding the homes for food, electronics and liquor, she said, and a sniper perched on a construction crane killed several civilians trying to flee out of town.

Her husband Valerii flipped through videos shared by their neighbors of dead bodies strewn in a nearby road. Russian forces also took on a gradually obsessive mission to shoot down a Ukrainian flag planted on another crane but failed to do so for weeks, Chmut said.

Through it all, Chmut stayed focused on her gardening after her shop was looted, turning to her potatoes, beets and radishes.

She is less interested in the fléchettes. The Russian soldiers left a forest's worth of wood in the form of ammunition crates, and they will come in handy to feed a fire during the next harsh winter. And the metal from discarded artillery shells she collected, Chmut said, will soon make a lovely fence.

The Washington Post's Serhii Korolchuk contributed to this report.