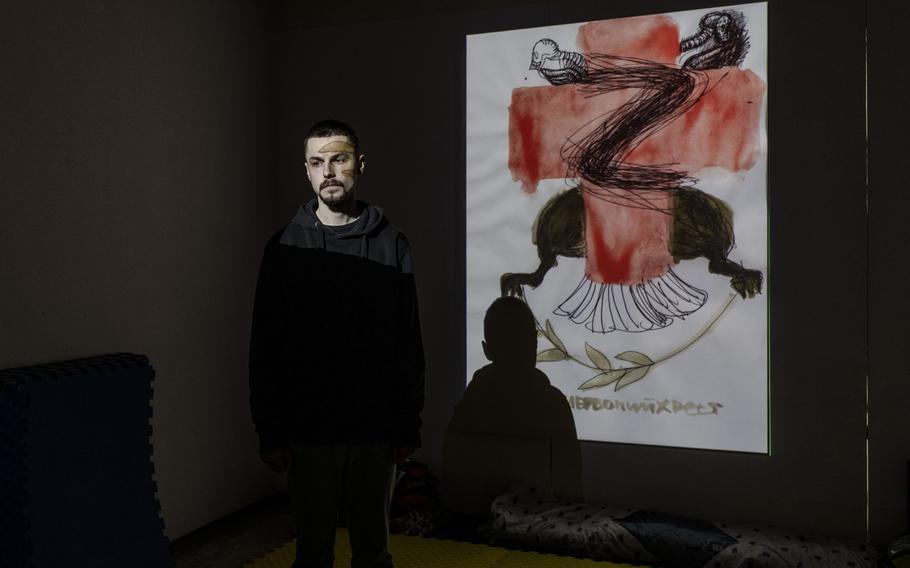 Stepan Burban, a 27-year-old rapper insisted on using one of the art works done recently by Kyiv artist Vlada Ralko as his new album cover as a way of coping and expressing anger connected to the current invasion. (Kasia Strek/for The Washington Post)

LVIV, Ukraine — When one of Ukraine’s most renowned visual artists left her home in Kyiv in the first days of the Russian invasion, she went to the Lviv Municipal Art Center. Vlada Ralko settled in among the hundreds of displaced people who sheltered at the facility last month.

Now it’s an art gallery again, showcasing the wartime work of artists from around Ukraine — including Ralko, who spent several weeks here in silence, churning out more than 100 drawings depicting the invasion.

During the same period, Stepan Burban, a 27-year-old rapper from Lviv, added to his soon-to-be released album a track that amounts to a call to arms for Ukrainians. He swapped out the planned cover art for one of Ralko’s recent drawings, showing a bomb landing on a crushed womb.

Ukrainian daily life away from the front lines in the last two months has seen a wholesale rejection of all things Russian, paired with a need to tell the world — and especially Russians — what’s happened here. The country’s contemporary artists, who for years have fought an uphill battle against a Soviet legacy of rigidity governing freedom of expression, now find themselves at the forefront of that storytelling mission.

Street posters in Lviv, which has become a gathering place for displaced artists from around the country, depict Ukrainians as white knights, noble siege defenders in medieval armor or men on horseback wielding tridents. Russians are represented as bloodthirsty bears, serpents, dead-eyed zombies and red-skinned goons.

While the artistic reaction in Ukraine’s metropolitan centers has been swift, arrivals from the East lament the absence of a similar response to Russian aggression eight years ago, when the federation invaded the Crimean peninsula and began the War in Donbas. 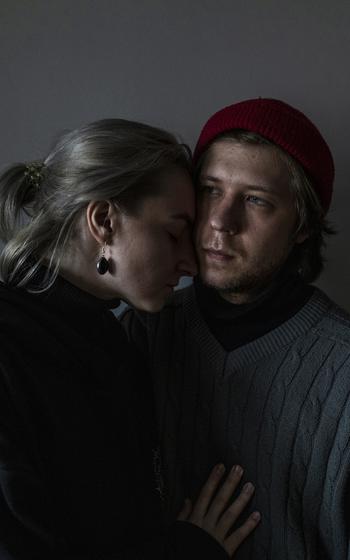 Julia Sidorchenko, an actress and singer, and Vitaliy Matukhno, an artist and art curator from Luhansk region in their new house in Lviv where they now live, on April 5, 2022. (Kasia Strek/for The Washington Post)

Vitaliy Matukhno was a 15-year-old in the Luhansk region of eastern Ukraine during the annexation of Crimea. He spent his formative years watching Russian-backed separatists and pro-Russian elements subdue Ukrainian authority and suppress any hint of Western culture.

“They destroyed our city from the inside so people would remember things back in the Soviet Union were better,” said Matukhno, now 23.

Before the invasion, Matukhno was an activist, organizer, artist and publisher. He threw rave parties, planned art festivals and published a zine featuring his peers’ work. Months ago, at an abandoned television station in Lysychansk, he discovered a trove of recordings from 2002. He plans to create a compilation of scenes of life in the region before the war in Donbas.

“You have these European liberals saying, ‘We want peace,’” Matukhno said. “They’re trying to create a dialogue between Russians and Ukrainians. It’s totally [nonsense].”

“Every Russian is guilty for what’s going on right now. We have a right to hate them. They’re destroying my country.” 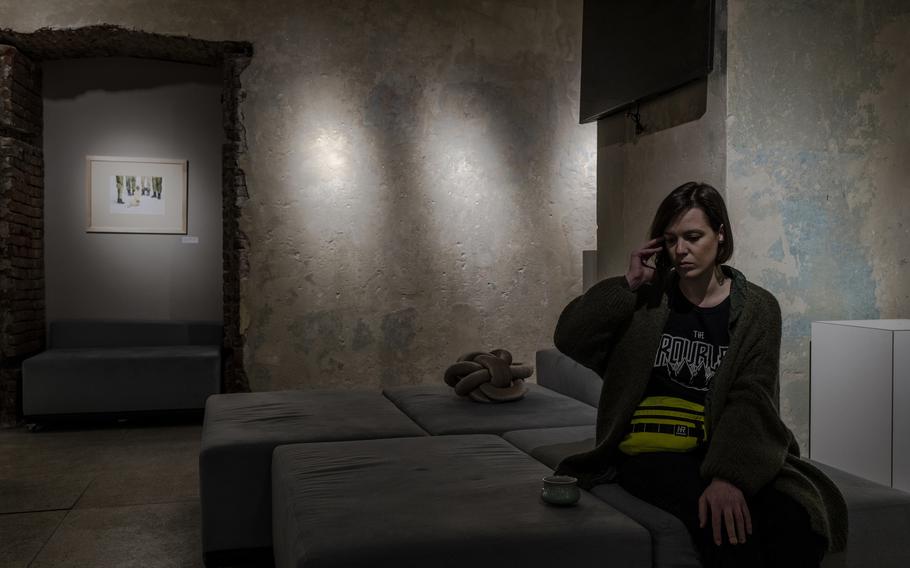 Liana Mytsko, director of Lviv Municipal Art Center. During the first weeks of the full-scale invasion, the art center was transformed into a shelter for people fleeing from other areas of Ukraine. Now it hosts creative people from all the country and organizes artistic events, exhibitions and talks in the subject of the war. (Kasia Strek/for The Washington Post)

At the Lviv National Academy of Arts, students turned a campus bomb shelter into an art gallery, in part to boost morale and in part to entice apathetic and fatalistic college students to actually use the shelter when the city’s air raid sirens wailed. Upon entering, Visitors are welcomed with a red bell and sign reading “Ring for Putin’s death.”

The tenor of the gallery shifts as one travels down narrow corridors that bear witness to what has been lost. One exhibit asks visitors to draw something they miss from homes to which many can’t return on a tiny piece of paper and slide it into a Ukraine flag-painted matchbox.

One student who was in Kharkiv when bombing began recorded what he could hear from his balcony for 24 hours during the invasion. Throughout the recording, chirping birds are interrupted by explosions. Over time, moments of peace produce only anxiety, knowing the other shoe will drop again shortly.

Kharkiv State Academy of Design and Arts rector Oleksandr Soboliev is now living in Lviv and working out of an office at the academy. He said more than 30 of the academy’s 1,036 students are missing and unaccounted for, and one has been confirmed dead. Students have been submitting war-related posters to an initiative started by the school and working to get them seen by Russians on social media. 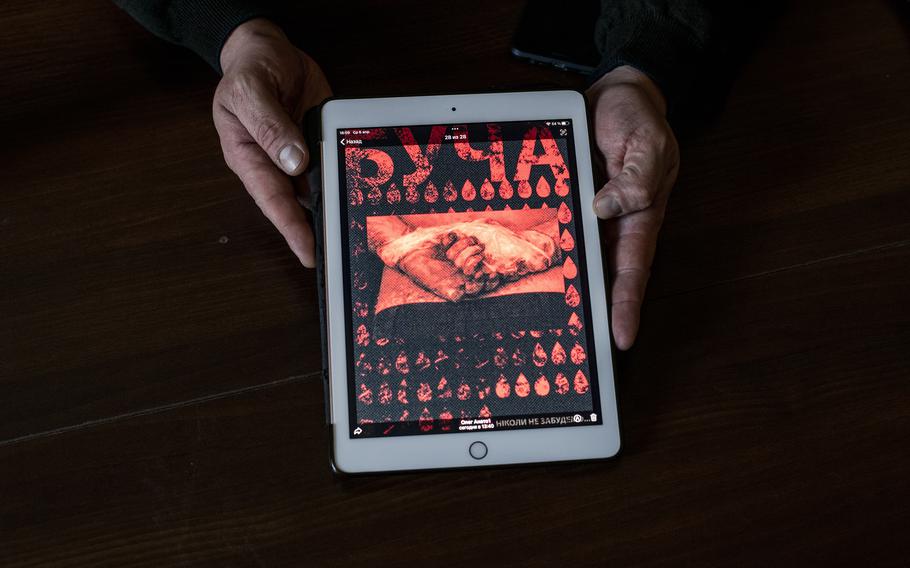 Kharkiv State Academy of Design and Arts rector Oleksandr Soboliev shows a poster one of his students created related to the massacre in Bucha, in Lviv, Ukraine, on April 6, 2022. (Kasia Strek/for The Washington Post)

“Nowadays we are giving much more freedom to students in regards to black humor,” he said. “In peacetime that was not allowed. Now it’s the opposite, actually.” A popular theme: the words of the Ukrainian Snake Island defenders who famously told a Russian warship “Go [expletive] yourself!” The ship has since sunk; Ukraine has claimed responsibility.

Ukraine this week released a postage stamp with a drawing picturing a soldier making an obscene gesture toward the ship.

At the municipal art center, where Ralko stayed before departing for Germany, and Burban now works on his laptop producing music, walls that once featured exhibits on pottery and Lithuanian photography are now covered with depictions of violence. Among the first works that greet visitors: a drawing of children being ferried across a river by demonic boatmen; and across the hallway, a drawing of a woman cowering on the ground with four soldiers standing in a semicircle around her, one without pants.

“The words from my last songs about people are not relevant anymore. Something changes because people are now united,” Burban said. “I don’t know what awaits us after the war. When we need to live peacefully and become devoted to some ideas and values, it becomes difficult to be that united organism.”

Violetta Pedorych contributed to this report from Lviv.