Clearing the deadly litter of unexploded Russian bombs in Ukraine 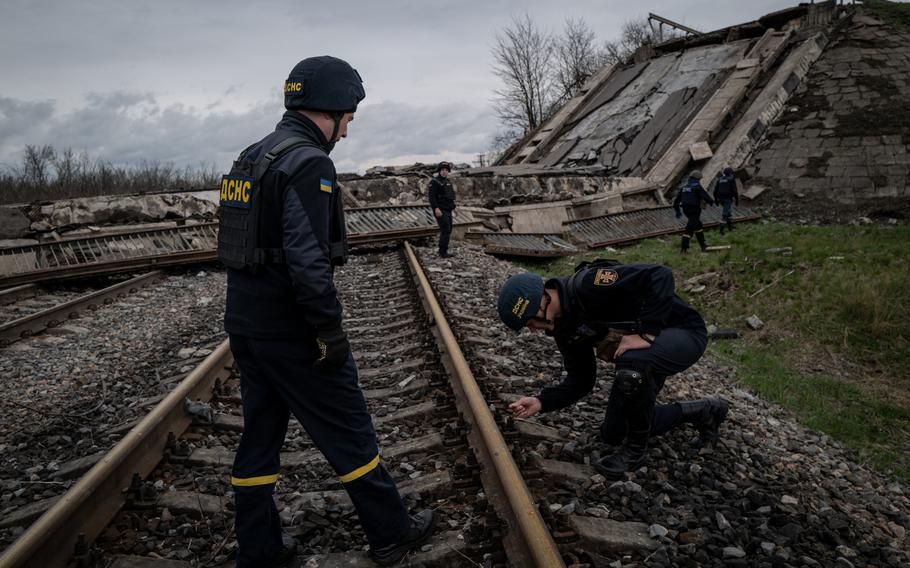 A demining team searches an area for unexploded ordnances outside Mykolaiv. (Nicole Tung/For The Washington Post )

MYKOLAIV, Ukraine — Valeriy sucked in his breath as a colleague fastened the layers of his thick bomb suit, yanking the Velcro across his abdomen even tighter. On went red gloves over Valeriy’s hands, then taped pads over the gloves. A bubble helmet was the last step, completing an ensemble that made him look like an astronaut. Except that his plastic visor had several cracks - from where shrapnel hit it.

In this city near Ukraine’s Black Sea shore, the 33-year-old was dressed to drop pieces of TNT on unexploded munitions lying around a residential neighborhood. Behind just a single block of homes, eight bomblets from a cluster munition lay in a field.

Despite just seven weeks of war, much of Ukraine is already littered with deadly unexploded ordnances and mines. A spokesman for the State Emergency Service said 54,000 mines and unexploded ordnances — including almost 2,000 missiles — have been found and deactivated. More than 600 deminers are at work across the country, and the department is rushing to hire more. In Mykolaiv alone, the goal is to expand from three teams to eight.

Valeriy and his team spend every day clearing these remnants of Russia’s bombardment. The thousands of still-deadly ordnances are a reminder that even in areas where the Kremlin’s forces have been pushed back, dangers remain —- an obstacle for Ukrainians who want to return to their homes and some semblance of normalcy.

They could leave a legacy of fear and devastation long after the war ends.

Some of the unexploded bomblets are attached to colorful ribbons, drawing the attention of children. “We know of at least 10 terrible incidents where people have gotten hurt,” said Andrey Shlykov, commander of the Mykolaiv demining unit. “And that’s only the ones we know about.”

Shlykov’s unit clears about 30 unexploded ordnances per day, and it’s barely making a dent. Just one cluster munition can disperse hundreds of bomblets. The work is slow and meticulous. It could take months more — even without a Russian reoccupation.

In Mykolaiv, which is less than 50 miles away from where Russian troops are still positioned in Kherson, deminers work amid ongoing shelling. Throughout a typical day, they field calls giving addresses of where unexploded ordnances have been spotted. Some are in people’s gardens. Others are in playgrounds or at the zoo. On farmland across the region, signs warn of potential minefields.

Detonating one of these munitions follows a careful script. The chosen deminer dons the bomb suit — far better protection than early in the war, when teams would approach the munitions only clad in a bulletproof vest and helmet and without any protection for their hands. The TNT is readied, tied to the end of a long stick lined with detonating cords. While everyone else waits a safe distance away, the suited-up point person drops the TNT at the munition and then retreats.

Then the unit’s commander screams out a warning for blast-stressed locals to take cover. Sometimes the deminers will knock on doors in an area to personally alert people and keep them from worrying that the boom signals another Russian assault. 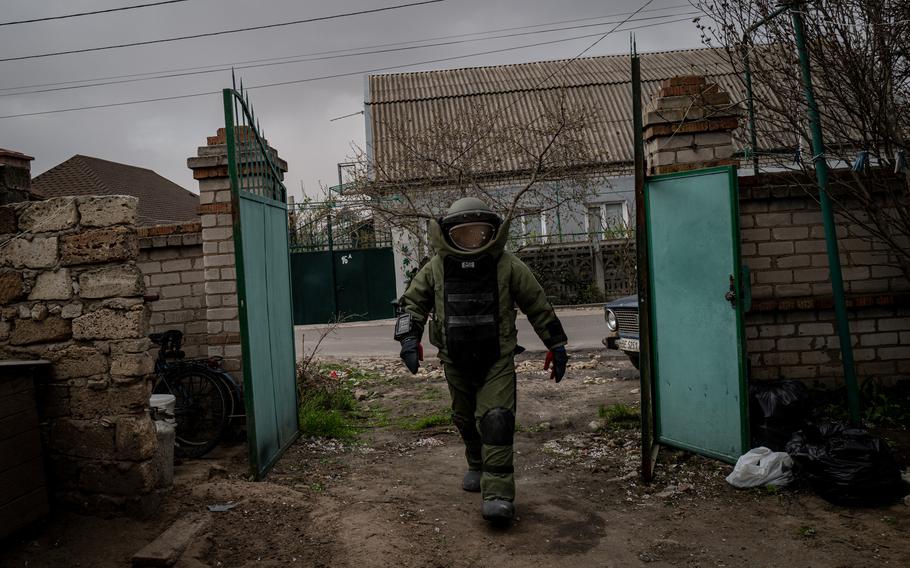 A senior deminer with Ukraine’s State Emergency Service arrives at a home in Mykolaiv where an unexploded cluster munition waits in the garden. (Nicole Tung/For The Washington Post)

On a gray afternoon, Shlykov commanded “fire!” and eight times a bomblet cleared. Valeriy, who declined to give his last name because of security concerns, was sweating visibly in his bomb suit. He took sips from a bottle of orange soda between each explosion.

The danger is acute. According to the State Emergency Service, 29 workers have been killed while doing demining and related work, and 73 have been maimed or otherwise injured.

One of those injuries occurred Monday in Mykolaiv. A member of Shlykov’s team was searching for the ordnance when it suddenly exploded. His hands got the brunt of the blast and the flying shrapnel. His comrades have been visiting him daily at the hospital - and taking even more caution as they work.

“It’s terrifying,” said Oleksandr Zaytsev, a 22-year-old deminer. “You’d have to be crazy for it to not be scary.”

Areas surrounding Kyiv were some of the most heavily mined. In Makariv, just west of the capital, Mayor Vadym Tokar said that on Sunday alone he had gotten calls about two unexploded missiles, two unexploded artillery shells and 30 antitank mines.

“We’ve stopped counting the tripwires,” he said. “Houses, courtyards, human corpses and even dead dogs have been tripwired.”

The type of land mines designed to kill people — known as anti-personnel land mines — has been outlawed by most countries since 1997. There is evidence that Russia has used anti-personnel mines and retrofitted anti-vehicle mines in residential and agricultural areas across Ukraine, U.S. officials and military analysts say.

Demining teams have had to work under the assumption that anything and everything could have a mine attached. Tokar pulled out his phone and showed a video of a car in which a civilian had been killed during the occupation. Because of the way the body was stuck inside, it was impossible to check whether it was mined.

To give the deceased a burial, town officials had the entire car interred.

Oleksandr Ivanenko, who oversees demining in and around Makariv, said that none of the area’s 48 towns and villages had been fully cleared. People trying to move back, or at least to check on damage to their homes, lined up outside his office this week so they could submit requests for deminers to assess their properties.

“It’s our first day in the city since we evacuated,” said Natalia Moskovchyk, one of the applicants. “There is nothing to save there anymore, but we are just afraid to get any closer to the house.”

Mines have taken an awful emotional toll on civilians, leaving many afraid to make even the most basic trips outside. Stories of sudden explosions abound.

On April 3, four young men were driving a truck loaded with a gas canister, food and other humanitarian supplies to the town of Andriivka. It was only several days since Russian soldiers had withdrawn.

The friends - all from the same village - knew the area well and had been taking shortcuts across fields and through forests for their whole lives. Taras Pelukhivskiy, 33, was at the wheel. His brother, Sergiy, 34, was in the front with him.

Then they drove over the mine. Taras was thrown from the car. When he regained his senses, he saw his brother had lost his legs and an arm. He saw one friend, Roman Svintsitskiy, 29, on fire, and the other, Yaroslav Evtuskenko, 33, bleeding badly.

“I removed my belt and made a tourniquet for the arm that was still there,” said Taras, recalling his brother’s death from the hospital where he and the others are recovering. “But there was no chance. That’s the last thing I said to him: ‘You’re not going to make it.’ “ A sign warns of mines on a main road outside of Makariv, Ukraine. (Heidi levine/For The Washington Post)

Deminers later found 98 mines laid out in a crosshatch pattern across the field where Sergiy Pelukhivskiy died.

Taras lost an eye and four teeth. His eardrum is ruptured and one finger nearly torn off. An artery in his leg was severed. He is consumed with guilt about his brother’s death. They had been inseparable, building their houses and a store together and having raised their children together.

On Monday, his mother visited the hospital to bring him food and a blanket. As she talked about Sergiy and how good a son and brother he had been, Taras began to cry.

“Sergiy had such a big soul,” Olga Pelukhivska said. “Taras and Sergiy - they were guys made for each other. We had such a good family, the envy of the whole village.”