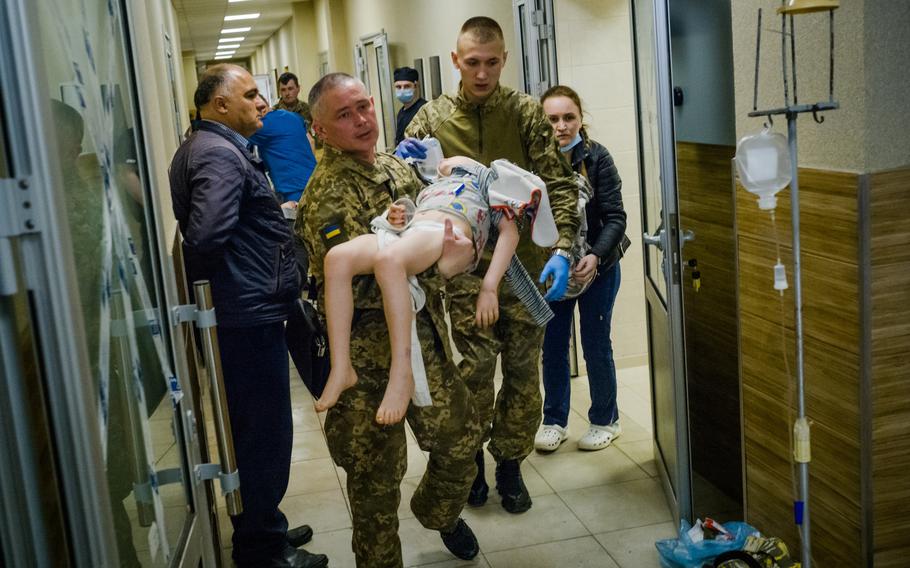 Dozens were injured and at least 50 people died, including five children, in a Russian attack on a train station in Kramatorsk, Ukraine, where evacuation trains were departing on Friday. (Wojciech Grzedzinski/The Washington Post)

KRAMATORSK, Ukraine — At least 50 people were killed and 98 injured in what Ukrainian President Volodymyr Zelensky called an “evil” Russian shelling attack on a train station where hundreds of civilians were attempting to flee ahead of expected attacks.

Grisly scenes emerged from the city of Kramatorsk, with bodies strewn among luggage, toys and debris. Witnesses described a large explosion followed by four or five “cluster bombs” that tore into a crowd of people who had gathered to catch an arriving train. Pavlo Kyrylenko, head of the Donetsk regional administration, said 38 people died at the station and another 12 died while in the hospital. Among the dead are five children, he said, with a 16 children recorded as injured.

The horrific attack in Kramatorsk comes a day after Russia was suspended from the U.N. Human Rights Council over reported atrocities in Bucha and elsewhere, and as Western allies continue to boost military and diplomatic support for Ukraine.

“This is another war crime of Russia, for which everyone involved will be held accountable,” Zelensky said in a video address Friday night in which he again pleaded for Russian to be held accountable by an international court. “Like the massacre in Bucha, like many other Russian war crimes, the missile strike in Kramatorsk must be one of the charges at the tribunal, which is bound to happen.”

As the war enters its seventh week, Russian forces are intensifying their shelling of eastern and southern Ukraine, with analysts saying forces that were pushed back or evacuated from other parts of the country are regrouping. Ukrainian officials are calling for immediate evacuation ahead of what they expect to be a violent onslaught in the eastern provinces in coming days, which made the specter of civilians slaughtered at a crowded train station even more haunting.

President Joe Biden called the attack “yet another horrific atrocity committed by Russia.” He and Defense Secretary Lloyd Austin announced that the U.S. will send a Patriot missile system to Slovakia, backfilling for the NATO member country after it earlier sent a Soviet-built S-300 air-defense system to Ukraine.

“I have directed my administration to continue to spare no effort to identify and provide to the Ukrainian military the advanced weapons capabilities it needs to defend its country,” Biden said.

Biden also signed into law two new measures designed to punish the Kremlin for its invasion of Ukraine: an act formalizing the suspension of normal trade relations with Russia and Belarus, and one that prohibits the import of Russian oil, liquefied natural gas and coal.

Japan announced it will expel eight Russian diplomats and take steps to reduce its dependence on Russian energy, including a planned ban on Russian coal exports, Prime Minister Fumio Kishida said in a news conference

Russia denied involvement in the train station attack, calling accusations by Ukrainian officials “absolutely untrue.” Russia’s Defense Ministry said in a statement that fragments the found near the station are “used only by the Ukrainian armed forces.”

A senior U.S. defense official, speaking on the condition of anonymity under ground rules set by the Pentagon, said the Pentagon is “not buying” Russia’s denial.

Pro-Moscow journalists reported the missile attack on Telegram channels within minutes of the shelling, referring to it as a successful Russian assault on Ukraine fighters or hardware, according to open source data analysts.

However, the posts were swiftly deleted when information emerged on the high civilian toll. 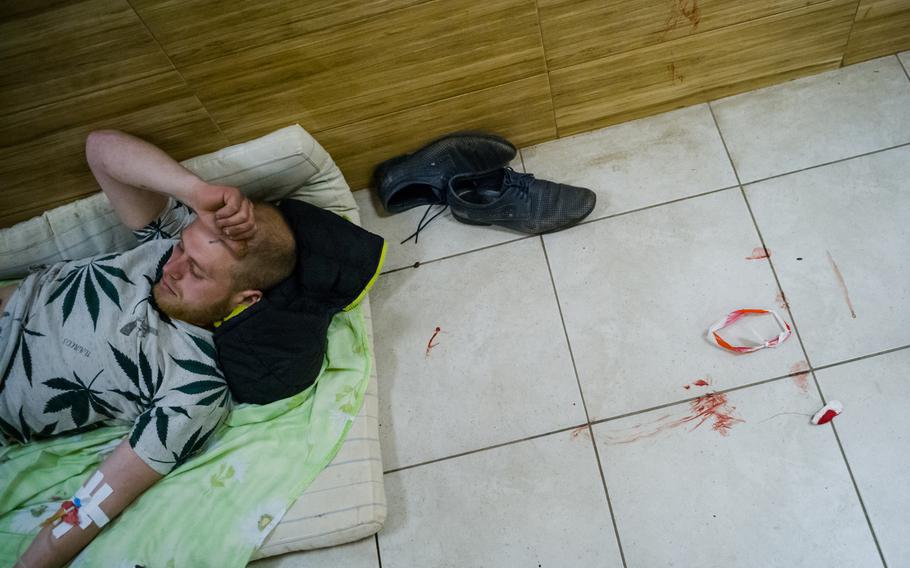 Dozens were injured in a Russian rocket attack on a train station in Kramatorsk on Friday. Some of the wounded were treated in a city hospital. (Wojciech Grzedzinski/The Washington Post)

European Commission President Ursula von der Leyen and other top E.U. officials who traveled to Ukraine to meet with Zelensky, also denounced the train attack, with von der Leyen calling it “despicable” and saying she was “appalled by the loss of life.”

The group traveled to Bucha, using their first trip to the region since the invasion to draw attention to alleged war crimes there during the town’s Russian occupation. Images posted from the trip show von der Leyen in a flak jacket, surrounded by armed Ukrainian military personnel, as they survey rows of black body bags in an outdoor area. Also in the group are Josep Borrell, the E.U.’s top diplomat, and Eduard Heger, the prime minister of Slovakia.

“It was important to start my visit in Bucha,” von der Leyen tweeted Friday. “Because in Bucha our humanity was shattered.”

The strike on the train station was in line with Russian President Vladimir Putin’s “intent to heavily destroy infrastructure,” said one senior NATO intelligence official. “Therefore we are not surprised that even in the phase of regrouping that he is still using missiles and airstrikes to destroy infrastructure and to kill people as well.”

The official, who spoke on the condition of anonymity under NATO ground rules, said he expects Putin will continue to keep pressure on Ukrainian forces with missiles and airstrikes “especially in the area of Kramatorsk and Donetsk and Luhansk,” all of which are in the eastern Donbas region of Ukraine. But he predicted airstrikes from Kherson to Mariupol to Kharkiv as well.

“Lacking the strength and courage to stand up to us on the battlefield, they are cynically destroying the civilian population. This is an evil that has no limits,” Zelensky said in a Telegram message following the attack.

Russian forces have expanded the number of military units in eastern Ukraine from 30 to more than 40, the Pentagon said on Friday, adding thousands of additional troops to the region after largely pulling out of the country’s north. U.S. officials also assess that Moscow is using the Russian towns of Belgorod and Valuyki — north of Ukraine’s border — to reequip its forces ahead of the changing offensive.

The Pentagon said on Friday that many Russian units had been “almost completely devastated” earlier in the war, estimating that between 15 and 20 percent of Moscow’s forces have been lost with some units diminished beyond recovery.

“It’s unclear if they will ever be re-formed,” Defense Department spokesperson John Kirby said of the units, or whether commanders plan to reconsolidate parts of the units with others. NATO officials last month estimated that Russia could have lost up to 15,000 troops in the first month of fighting, but accurate figures are difficult to verify.

A Washington Post photographer who arrived at the Kramatorsk train station moments after the attack saw Ukrainian military personnel, police and volunteers covering rows of dead bodies in green tarps. Nearby, the Kramatorsk Town Hospital No. 3 and its five operating rooms were overwhelmed with patients with serious injuries. Staff were treating more than 20 people in the hallways and waiting rooms.

Around 100 yards from the station, a large missile fragment was visible wedged into the ground. On its side, a Russian phrase translated as “For the Children” was painted in white — an apparent allusion to Russia’s motivation for the war as laid out in propaganda: protecting the Donbas region. 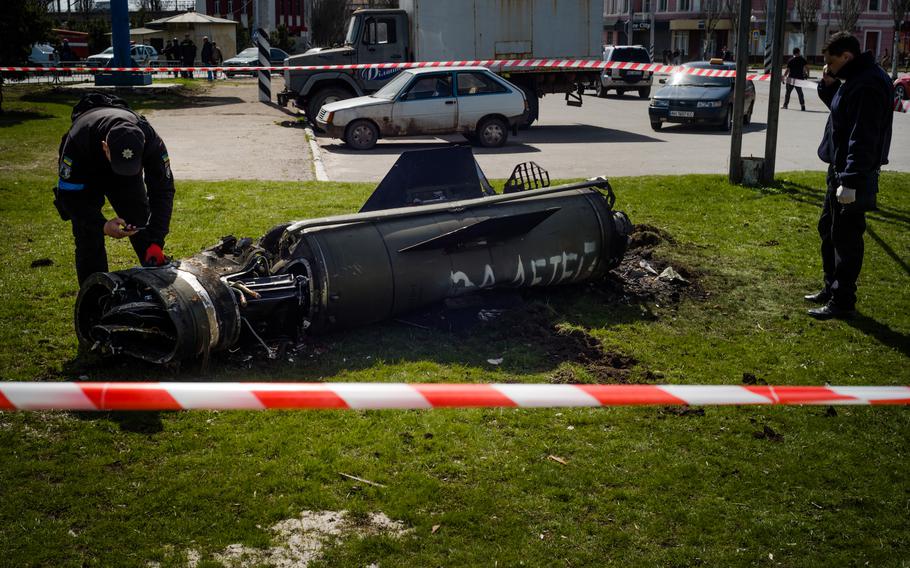 A partly damaged rocket with sign in Russian "for the children" lays in front of the train station on Friday. (Wojciech Grzedzinski/The Washington Post)

The civilians seeking to flee Kramatorsk are among thousands across eastern Ukraine that have been given orders by officials to evacuate immediately, warning of more intense attacks in the coming days.

The British Defense Ministry said on Friday that Russian forces have now fully withdrawn from northern Ukraine and have been recalled to Russia and Belarus as preparations are underway to transfer them to the eastern region of Donbas, where the Kremlin is focusing its attacks. Officials said in the Friday morning intelligence update that the troops are probably going to need “significant replenishment” and mass deployments could take up to a week.

Officials in Ukraine’s east are on high alert, and say constant shelling is a sign of the assault to come.

“The scum don’t stop and they are regularly raking us with fire,” said Serhiy Haidai, regional governor of the eastern city of Luhansk in a Telegram Post. He said the situation in his region was “very bad” and said preparations for an all-out attack could take place in just a matter of days.

A similar warning came from Pavlo Kyrylenko, the Donetsk regional governor. “They’re shelling all day, especially in Adiivka and Vuhledar,” Kyrylenko said in a television interview that was posted on his Telegram channel.

Residents of the southern Ukrainian city of Odessa, so far relatively unscathed by the fighting, will be subject to a curfew this weekend amid fears of an attack similar to the one in Kramatorsk.

“I appeal to the residents of Odessa and the region to understand the restrictions and not violate them . . . because the consequences can be fatal,” Maxim Marchenko, governor of the Odessa region, said in a statement.

In the southern port city of Mariupol — subject to some of the fiercest attacks since the war began — shelling continues. An adviser to the mayor’s office, Petro Andryushchenko, denied reports that Russian forces have taken hold of the city, though his comments could not be independently verified.

“For the second day in a row, the Russians are spreading the same news that they have taken control of the city. This does not correspond to reality,” Andryushchenko wrote on his Telegram channel.

Ten humanitarian corridors, including routes through Luhansk, Mariupol and Melitopol were to be opened on Friday, Ukrainian Deputy Prime Minister Iryna Vereshchuk said.