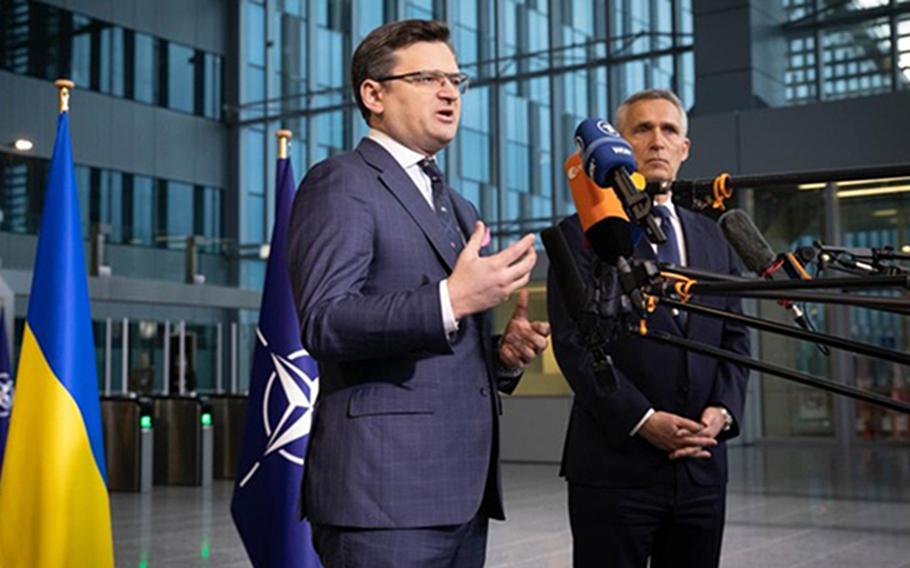 Ukrainian Foreign Minister Dmytro Kuleba speaks at NATO headquarters in Brussels on April 7, 2022, ahead of a meeting of officials from member and partner countries. Kuleba is flanked by NATO Secretary-General Jens Stoltenberg. (NATO)

U.S. Secretary of State Antony Blinken and his counterparts took up the issue of how to get more weaponry into Ukraine as the war, which began Feb. 24, enters a new phase.

“I think the deal Ukraine is offering is fair,” Kuleba said. “You give us weapons. We sacrifice our lives. And the war is contained in Ukraine.”

Blinken, speaking to reporters after the talks, said allies are providing the weapons and systems that Ukrainian troops can use most effectively “to push back against Russian aggression.”

“We are not going to let anything stand in the way of getting Ukrainians what they, and what we believe, can be effective. We are looking across the board right now,” Blinken said.

But Kuleba said that the question isn’t whether more weapons will arrive — it’s whether allies will provide them in time as Ukraine prepares for a new Russian offensive in the east.

“Either you help us now, and I am speaking of days, not weeks, or your help will come too late,” said Kuleba, who said the battle for the eastern Donbas region would be of a scale unseen since World War II.

NATO Secretary-General Jens Stoltenberg has warned that Moscow’s recent withdrawal of forces from around the Ukrainian capital of Kyiv marks a shift in strategy rather than de-escalation.

Now, Russian forces are resupplying and regrouping in Belarus. After failing to capture Kyiv, Russia is expected to refocus on Ukraine’s east, with the aim of establishing a land bridge between Donbas and the occupied Crimean Peninsula.

Kuleba said Ukrainian forces can resist, but only if they are better armed. Stoltenberg expressed confidence Thursday that allies are prepared to do more.

“I am certain that we will address the need for more air defense systems, anti-tank weapons, lighter but also heavier weapons, and many different types of support to Ukraine,” said Stoltenberg, flanked by Kuleba at NATO headquarters, prior to the start of talks Thursday.

Since the Russia-Ukraine war began, the U.S. has committed $1.7 billion worth of weaponry and other items to support Ukrainian forces.

Javelin anti-tank systems and Stinger missiles are among the arms the U.S. has supplied. Others pegged for delivery include Switchblade tactical drones and Puma drones for surveillance.

Numerous other allies have sent weapons as well. Still, Ukraine says some NATO members, Germany in particular, have been too cautious and too slow in delivering arms.

He credited Germany for reversing its previous position of not providing lethal weaponry to his country in the wake of Russia’s invasion, but he said Berlin is still too restrictive on what it is willing to send.

“It is clear that Germany can do more given its reserves and capacity,” Kuleba said.

He called on allies to “put aside their hesitations” and added: “Because as weird as it may sound, today weapons serve the purpose of peace.”