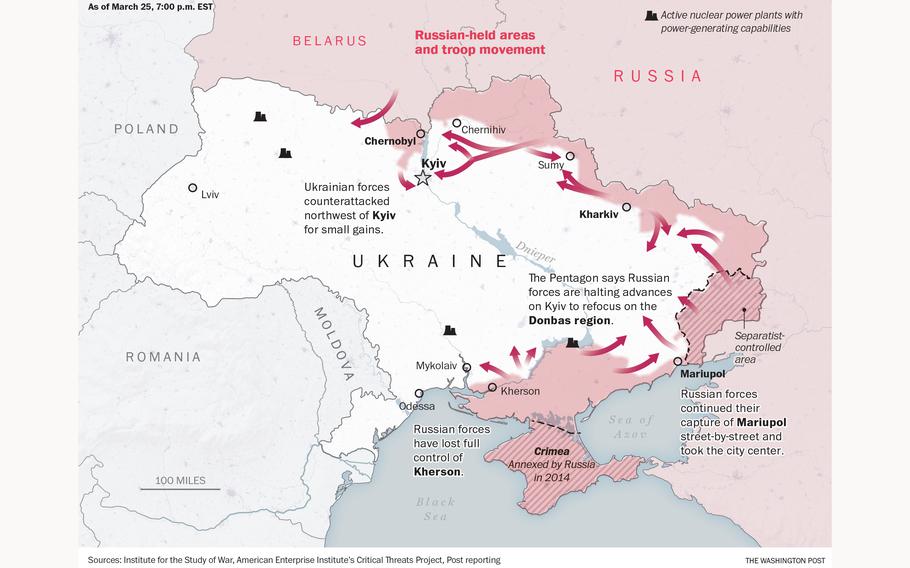 Biden, who met with members of the 82nd Airborne Division and Polish President Andrzej Duda, said he regretted that he could not cross the border into Ukraine, barely 60 miles away, to see the crisis firsthand.

But inside Ukraine, where Russia's brutal onslaught continued, a senior aide to President Volodymyr Zelensky said officials were "very disappointed" in the outcome of the series of summits Wednesday among NATO and European Union leaders in Brussels that brought Biden to Europe.

U.S. and Ukrainian officials believe that the Russian operation has already failed in some respects, given strong Ukrainian resistance and heavy Russian losses, and Russia signaled Friday its aims might be narrowing. But Yermak's remarks served as a reminder that Ukraine remains outmanned, outgunned and facing more destruction each day.

By issuing a general statement of ongoing military support, while continuing to deny Ukraine's requests to send it Soviet-era jet fighters, impose a no-fly zone against Russian aircraft over Ukraine, and speed the flow of more heavy weaponry, Yermak said, NATO "is just trying to ensure that it is not provoking Russia to a military conflict" with the West, calling the alliance's inaction "appeasement."

"We need very concrete things. But we still have to repeatedly remind you," he said.

Yermak said Ukraine needs NATO to "close our sky" to Russian air power and provide "intelligence in real time," as well as more anti-aircraft and antitank weaponry - some of which is now in short supply in the West. He also pleaded for more long-range artillery, rocket launchers and small weapons.

"Without it," Yermak said, "our war will not be able to stand."

Far from an anticipated rush toward full occupation of a country with a far weaker military, Russia appeared Friday to have at least partially lost control of the southern Ukrainian city of Kherson, on the Black Sea, according to defense officials, the first of a handful of midsized cities it has struggled to occupy in the five weeks since the invasion began.

Ukrainian forces, bolstered by armed civilians, have pushed back Russian advances in other parts of the country, as well. The Pentagon said Friday that Ukraine has made "incremental" progress against Russia outside the northern city of Chernihiv, and other offensives were underway in the western suburbs in Kyiv, the capital. A senior U.S. defense official, speaking on condition of anonymity under ground rules set by the Pentagon, said that Russian troops, stalled outside Kyiv for weeks, have begun to establish defensive positions instead of prioritizing an advance.

While Russia's objective in the invasion initially appeared to be seizing Kyiv, the Kremlin is now emphasizing its intention to control the Donbas region in the east, where Ukrainian troops have been fighting against two breakaway areas since 2014. Moscow has recognized the region as two separate "republics."

"The combat potential of the Armed Forces of Ukraine has been considerably reduced, which . . . makes it possible to focus our core efforts on achieving the main goal, the liberation of Donbas," Sergey Rudskoy, head of the Russian General Staff's Main Operational Directorate, said in a speech Friday.

The renewed focus on Donbas could be a face-saving measure as the Russians fail to achieve their larger aims, such as the capture of Kyiv and decapitation of Ukraine's government. Russians have made modest gains in the east, and their focus now may be to enlarge territory controlled by separatists and declare victory. It could also be designed as a ruse to allow beleaguered Russian troops to rest.

It is not clear whether Russian troops will be pulled from elsewhere to reinforce Donbas, the U.S. defense official said, but there is evidence that they have shifted how they fight in other places.

"It appears the Russians are for the moment not pursuing a ground offensive toward Kyiv," the official said. "They are digging in. They are establishing defensive positions."

Rudskoy also issued the first Russian casualty assessment since the beginning of March, saying that 1,351 service members have died, and 3,825 have been injured. NATO estimated Wednesday that 7,000-15,000 Russian troops have been killed in four weeks of fighting in Ukraine, according to an alliance senior military official.

The official, who spoke on the condition of anonymity under NATO ground rules, said the estimate was based on several factors, including information from Ukrainian officials, what the Russian side has released, and open sources. By comparison, Russia lost about 15,000 troops over a decade of war in Afghanistan after it invaded in late 1979.

Among the most recent Russian casualties, according to a Western official and a Ukrainian journalist, was Col. Yuri Medvedev, commanding officer of the 37th Motor Rifle Brigade, who was attacked and injured by troops under his command after they suffered heavy losses in the fighting outside Kyiv. The troops ran a tank into Medvedev, injuring both his legs, after their unit lost almost half its men, according to a Facebook post by journalist Roman Tsymbaliuk.

Although Tsymbaliuk said the colonel had been hospitalized, a senior Western official said he believed Medvedev had been killed.

Russia's bombardment of Ukraine's population centers and other targets continued, with the senior defense official reporting Moscow is flying 300 sorties over Ukraine per day - an increase over a week ago. On Friday, Ukraine's air force also claimed that Russian missiles had hit a command center in Vinnytsia, in west-central Ukraine, "significantly" damaging some buildings.

The southern port city of Mariupol remained under heavy Russian attack and cut off from food, water and humanitarian assistance. Matilda Bogner, head of the United Nations Human Rights Monitoring Mission in Ukraine, said at a news conference Friday that her agency had received "increasing information" and satellite images of mass graves in Mariupol.

One mass grave identified appears to hold some 200 bodies, she said, although it remained unclear how many of the deceased were civilian casualties of the war.

Bogner said the U.N. human rights office had also documented 22 cases of Ukrainian officials disappearing or being forcibly detained in Russian-controlled territories, 13 of whom have since been released. A number of journalists in areas under Russian occupation in the southeast have disappeared or been killed.

In his remarks Friday, Yermak expressed gratitude to the United States and other Western countries, as has Zelensky in the numerous video addresses he has given to Western legislatures and other audiences. But, as has Zelensky, Yermak emphasized that Ukraine is the West's front line against further Russian aggression that NATO must stop for its own security.

Biden, in Poland, touted an additional $1 billion he had previously announced to aid the millions of Ukrainians who have fled the violence into neighboring countries and beyond, as well as the millions displaced and suffering inside the country. The United States has also committed to provide more than $2 billion in military equipment under Biden, including Stinger man-portable anti-air defense missiles, and Javelin antitank weapons.

As Russia's offensive was getting underway in late February, the State Department appealed to countries to which it had sold those weapons in the past to share those they could spare with Ukraine. The United States, it promised, would quickly issue the necessary waivers to transfer them to another country, and would backfill their arsenals with weapons sent from its own stockpiles.

But as the need in Ukraine has grown, some of those weapons, in particular Stingers, have been in increasingly short supply. Production lines for the missiles, which first entered service in 1981, ceased some time ago and "we are exploring options to more quickly replenish U.S. inventories, and backfill depleted stocks of allies and partners," Defense Department spokeswoman Jessica R. Maxwell said.

"It will take time to revive the industrial base . . . to enable production to resume," Maxwell said in an email. Among the options to fast-track production, she said, were adding additional workers to the production line and developing alternatives for obsolete components.

Mike Nachshen, senior director for international communications of Raytheon Missiles and Defense, which produces Stingers, said that they "recognize the urgent need to bolster inventories" and are working with government and industry "to accelerate production timelines so that we can deliver additional units of this critical combat capability as soon as possible."

The administration is considering invoking the Defense Production Act, which gives the executive emergency authority to control domestic industries and speed up production of certain critical items. Both Biden and President Donald Trump invoked the act to deal with the covid-19 pandemic.

The U.S. promise to resupply U.S.-manufactured defense supplies sent from other nations to Ukraine is of particular importance to countries along NATO's eastern flank, concerned about defending their own front lines in a possible confrontation with Russia.

In particular, Ukraine has asked for supplements to the Russian-made S-300 air defense system already in its arsenal, whose missiles fly higher and farther than the short-range Stingers. Slovakia and Bulgaria - which, like Ukraine, are former members of the Soviet-era Warsaw Pact - also possess the system, as does Greece.

Bulgaria and Greece have declined. Slovakia has said it would transfer the system, as long as the aging S-300 is immediately replaced, an action that requires a host of down-line changes to other capabilities once an alternative has been identified. In a visit to Slovakia last weekend, U.S. Defense Secretary Lloyd Austin said officials are working on it.

Radovan Javorcik, the Slovakian ambassador to the United States, said in an email this week that his government was in "close consultation" with allies, but "until a concrete replacement of the S-300 system has been identified, Slovakia will not be able to decide on a possible donation of the system."

DeYoung and Horton reported from Washington. The Washington Post's Miriam Berger in Jerusalem; Liz Sly in London; Mary Ilyushina in Riga, Latvia; and Dan Lamothe in Washington contributed to this report.