To evacuate or not? In Odesa, some older residents cannot flee war ODESA, Ukraine — Anna Churilyana no longer has her eyesight, but the images described when she switches on the television news every night are horrifying.

She clasped her hands together picturing Kyiv and Kharkiv as the beautiful cities she remembered. Her eyes watered at the thought of what they must look like now, after more than a week of heavy shelling by Russian forces.

“These explosions are all so terrible,” she said. Her voice trembled. “I can’t see them, but I can feel them with my whole body.”

Across Ukraine, people are on the move seeking safety outside the country or in areas to the west farther from Russian forces. Scenes at train stations around Ukraine have largely featured women and children tugging suitcases and toting whatever belongings they could bring. Men aged 18 to 60 are mostly prohibited from leaving.

And then there are the elderly. Evacuating can be too taxing emotionally and physically for many. For some, like 90-year-old Churilyana, it is so impractical that it is impossible.

Others insist on staying out of loyalty and love for their home, stubbornly resisting evacuation despite appeals from family members. That is especially true in Odesa, where there is a saying — “Odesa Mama” — that residents use to lovingly refer to their city as a matriarch who will protect them. 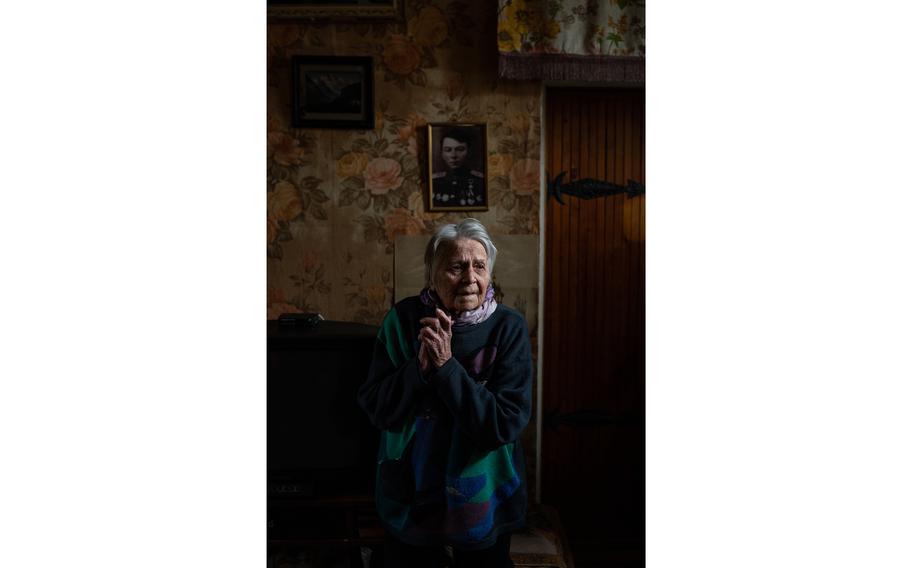 Churilyana, 90, has scarcely left her apartment for the past five years. Every day she says out loud the landmarks around her downtown Odesa building, a way of making sure her world is not confined to just these walls. She asked her niece, who lives with her, to put cloth over the windows as protection in case of blasts. It has made Churilyana’s dark world even darker.

“What difference does it make to me? Although, I guess I would like to feel sunlight,” she said.

Unlike some other major Ukrainian cities that have been under near-constant bombardment since Russia launched its first strikes on Feb. 24, people in the Black Sea port of Odesa have had nearly two weeks to safely evacuate west. The Moldovan and Romanian borders, considered less congested with refugee traffic than Poland’s, are conveniently close, too.

And if Ukrainians in the country’s western and central cities, such as Lviv and Dnipro, are optimistic Russian forces won’t launch an attack there, those in Odesa are under no such illusions. This is one of the Black Sea’s largest ports, making it economically critical for Ukraine and a no-doubt target of Russia. After seeing the destruction and bloodshed in Kharkiv and around Kyiv, why not leave Odesa for safer ground knowing what is likely coming for this city?

Two volunteers stopped by Churilyana’s apartment on Sunday to bring her a bag of nonperishable foods — buckwheat, canned tuna and other items. These are the other people who are staying in Ukraine despite the risks: ordinary citizens now mobilizing to help the war and humanitarian effort in the country. The number of volunteers for anything and everything across Ukraine has spiked.

Eduard Shevchenko’s Park Kultury organization was more of a social club two weeks ago. Now, with lots of groups already focused on aiding soldiers and civilian militias, Park Kultury has refocused its efforts on a demographic Shevchenko feared was being forgotten: retirees and older residents.

He and his colleague, Maksim Gaida, delivered food to five elderly families, including Churilyana’s, on Sunday afternoon. Perhaps more important than the goods they offered was the companionship.

“People want to help somehow because sitting at home doing nothing drives everybody crazy,” Shevchenko said. “We can draw an analogy with how the elderly feel: They stay home all the time, feel unwanted because nobody calls them, often unable to go out and buy food for themselves.” 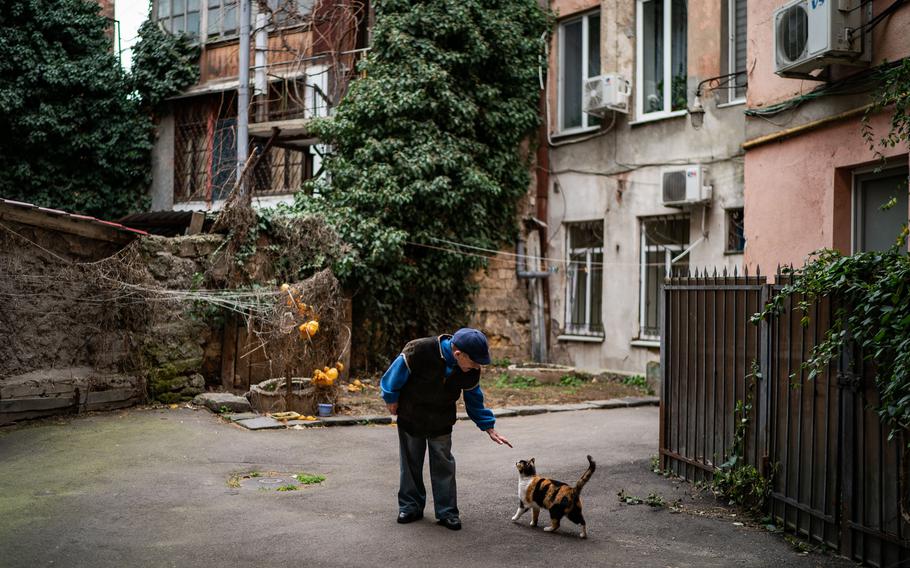 Oleksandr Zayarny, 68, pets one of the cats outside his home in Odesa, Ukraine, on March 6, 2022. (Salwan Georges/The Washington Post) Oleksandr Zayarny, 68, at his home in Odesa, Ukraine, on March 6, 2022. MUST CREDIT: Washington Post photo by Salwan Georges (Salwan Georges)

“There is nowhere to go, only Odesa,” he said. “My father died during the World War II. My wife died. I’m alone now.”

His wife’s black-and-white portrait hangs on the wall of the apartment he remodeled himself. She died more than three decades ago at just 33 years old. They did not have any children, and he never remarried. Instead, he helped repair homes for other families. He is a petite man who walks with difficulty — the price of a bad fall he took while painting a church years ago.

War is scary, he said. But “I’m not going to die yet. I want to live at least a couple of years more,” he added.

For 75-year-old Evgeny Petrov, evacuation is expensive. He still works. In his attic, he crafts custom leather goods — purses, wallets, cases for rifles and other items.

His wife was downstairs, laying down in bed. She rarely walks anymore and has not left their home in years.

“You leave and what’s next? Die from hunger or live off someone?” Petrov said. Evgeny Petrov, 75, inside his shop at his home in Odesa, Ukraine, on March 6, 2022. Petrov is a leather craftsman. (Salwan Georges/The Washington Post)

“Here we have these guys at least coming to help us, that’s the most important thing,” he said of the Park Kultury volunteers. “No one needs us anywhere else although, of course, everyone’s worried about us.”

Petrov heard about World War II from his mother and grandmother. Their stories were about air-raid sirens and bombs. One wall of the building he lives in even has battle scars from shelling.

“It all seemed so far away even though it had been taking place one year before I was born,” he said. “And now we have to see it with our own eyes.”

In Churilyana’s home, though she can’t see her brother’s portrait photo anymore, she remembered exactly where it’s hanging. He’s dressed in his military uniform in World War II. There’s another photo of him on the same wall — also dressed in uniform, but older.

Churilyana was born in Russia’s Ural Mountains before she and her siblings eventually moved to Ukraine. She’s outlived all of her siblings. Now native country and the one her father and brother fought for is waging war against her current home.

“I’m just waiting for my days to end,” she said softly.