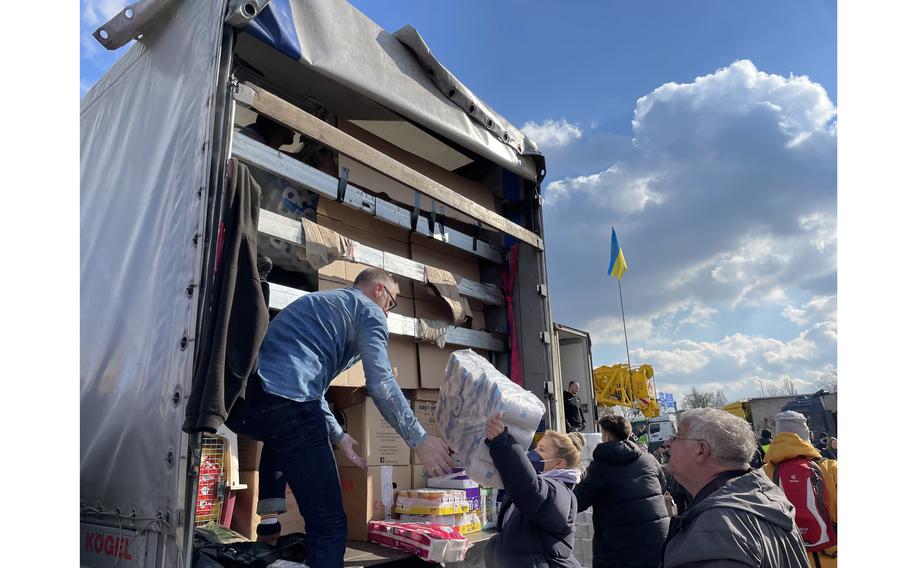 BERLIN — A truck driver in overalls grabbed a package of toilet paper from a volunteer and placed it in his trailer. The truck was nearly full. The driver said he was feeling powerful.

“Somebody has to do this. It’s my war — my war is to deliver goods,” said Vadim Pashkiuskiy, 29, as he prepared to return to Ukraine. “It may be dangerous, but it’s my responsibility to my country. I’m not hiding. I’m doing whatever I can to help.”

Pashkiuskiy lives in Zhytomyr, a city 90 miles west of Kyiv, and he last saw his family the day before war broke out. He was driving a route in northern Germany when Russian troops invaded his country.

The Ukrainian government says more than 66,000 nationals have since returned from abroad, galvanized by the call of President Volodymyr Zelensky for citizens to join the fight.

And now that supply chains for food and medicine have been disrupted by the war, people going back have become all the more valuable — especially people driving cavernous tractor trailers.

“A week and a half ago, all of these drivers were on their regular routes in Europe when the world changed,” said Ewa Herzog, a Ukrainian who has lived in Berlin for 20 years and has been part of an effort to load returning trucks with supplies.

“Not that far away from us, people are screaming for help,” she said. “We have to hear their voices and help the regular people of Ukraine.”

Herzog and other organizers began by partnering with fellow Ukrainian Andrey Sokoliuk, who has a furniture business and two trucks that regularly transport goods to and from Ukraine. The initial idea was to send those two trucks and drivers back in. But that expanded into an effort to find Ukrainian drivers all over Europe, get them to Berlin and load them up with supplies.

Over the past week, the organizers have overseen a massive donation drive — collecting baby and pet food, potatoes, batteries, fire extinguishers, medicine, boots, jackets and more. They have helped send more than a dozen trucks toward Ukraine.

On Saturday, at a parking lot on the outskirts of Berlin, more than 100 volunteers, some wearing yellow vests, sorted hundreds of cardboard boxes of donations from a constant flow of cars onto five waiting trucks.

Food was in one area. Clothes and hygiene in another. Medicine in a third. Everything was labeled in German and Ukrainian.

A man in military fatigues climbed onto one of the trucks and planted a Ukrainian flag. A woman carrying a tray of homemade muffins handed them out to whoever would take one.

For Ukrainian truck drivers who had been working in Europe when Russia invaded on Feb. 24, the time since has been agonizing. They’ve heard daily reports from crying family and friends of their cities destroyed, lives upended.

“How can I be here when my family is there and in such horrible conditions?” said Oleg, a 48-year-old driver from Dnipro, Ukraine, as tears began welling up in his eyes. “I cannot leave my family alone.”

While Dnipro is still relatively safe, Oleg said he wasn’t sure how long that would continue to be the case. But he said he was determined to stay no matter what happened. His parents are there, and his father is prepared to die in Ukraine.

Vyacheslav, a 40-year-old driver from Lutsk, said most of his friends have already gone to fight.

“My family is hiding from the bombings — they’re in great fear,” he said. But after hugging his wife and 18-year-old daughter, he would be ready to take up arms himself.

“We are not coming back [to Germany],” he said. “We are going to defend our country. This is our land. Relatives, history, culture, everything is there. When your home is invaded, you need to protect it.”

Pashkiuskiy — a thinner, younger man than many of the other drivers — said he wasn’t nervous starting his drive, but he wasn’t sure how he would feel when he entered Ukraine and began seeing familiar cities destroyed, began driving on more dangerous roads. He said he was prepared to go to the front lines if needed.

Pashkiuskiy said he was shocked to tears when he saw the efforts in Berlin to support his people.

One volunteer heard from friends fighting in Kyiv that they had little food left, only weapons. So the volunteer spent two days cooking, gathering snacks and cigarettes and packaging it all for them. Pashkiuskiy, who plans to drop off the bulk of his load in Zhitomir, promised that the volunteer’s friends would receive the care package.

Under normal circumstances, it would take a little over 14 hours to drive from Berlin to Kyiv. Most of the traffic is going in the opposite direction now — the United Nations says that 2 million people have fled the country. But the trucks going in can face delays at the border. Some drivers have waited 10 hours as border security swept their trucks, Herzog said.

The trucks then go on toward cities such as Lviv, Kharkiv and Kyiv, getting as close as they can to population centers. The supplies are unloaded from the trucks into smaller vans that can more easily navigate drop-offs at community centers, hospitals and homes.

“It’s much riskier to drive these big trucks in the streets of cities like Kyiv,” Herzog said. “It’s just not safe.”

Volunteers inside Ukraine have sent her videos of the trucks being unloaded, often assembly line style, by dozens of people. In one video Herzog posted on Instagram, locals in Lviv are unloading trucks in the snow as they say thanks to a driver for “risking their lives for Ukraine.”

Maria Köster, who has organized a separate but similar effort, said the trucks she’s coordinating have gotten as close as 40 miles from Kharkiv, but haven’t ventured further. “You can’t go there with big trucks,” said Köster, who was born in Moscow. “They’d be bombed in five minutes.”

Instead, her group, which she organized with two Ukrainians living in Berlin, has connected with a politician in Kharkiv, who has soldiers protect the trucks while volunteers spend up to five hours unloading them into small vans. The volunteers then drive into the city without protection and drop off the food and supplies.

But it has so far been impossible to get trucks to parts of Eastern Ukraine, such as Mariupol, that are under assault and running out of food and water.

Herzog said finding drivers who are willing to go that far and risk their lives further has been hard. She hopes the team will eventually be able to find willing volunteers, as she knows those cities are most in need.

“Sometimes, miracles happen,” she said. “We need a miracle, we need to get these people help.”