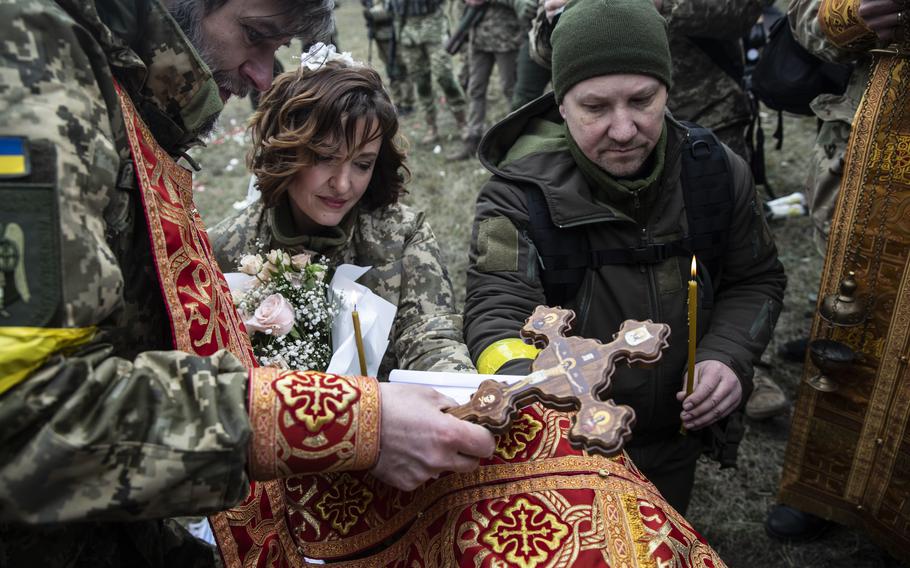 Lesya Filimonova and Valeriy Filimonov are wedded close to the front line in Kyiv on Sunday, March 6, 2022. (Heidi Levine/for The Washington Post)

So did the priest and the wedding party with comrades in the Ukrainian defense forces who lined up for the marital procession carrying shoulder-fired rocket-propelled grenades and antitank missiles.

Others guests included Kyiv Mayor Vitali Klitschko, who wore a bulletproof vest and took a selfie with the bride, and a throng of journalists invited to watch the spectacle of a wedding next to a checkpoint in the midst of Russia’s war on Ukraine.

Despite the surreal nature of Lesya Filimonova and Valeriy Filimonov’s marriage in the Ukrainian capital on Sunday, the moment in some ways offered a glimpse of normality amid the conflict. It showed, the mayor said, that “life continues and the people live and their love helps the war.” 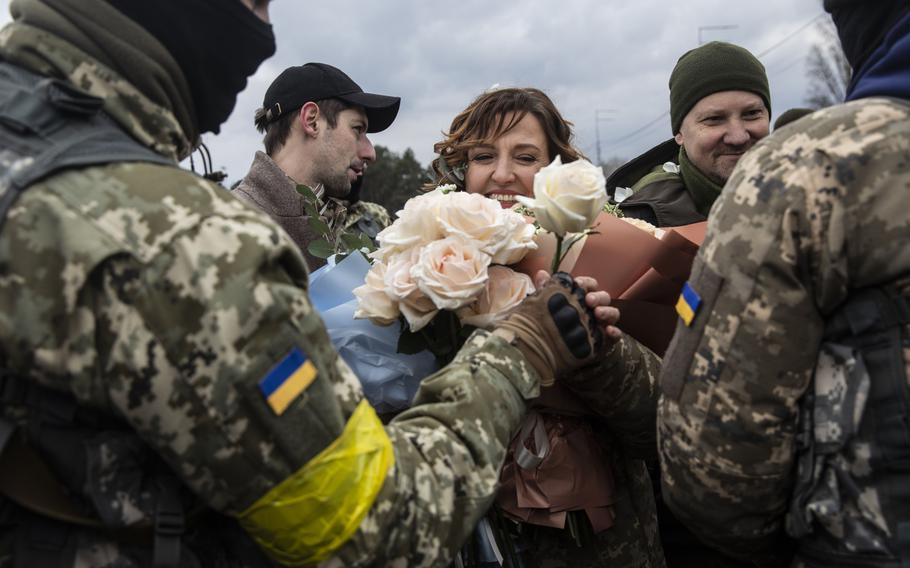 Members of the Territorial Defense Forces give roses to Filimonova. (Heidi Levine/for The Washington Post)

Just over a week ago, the couple were “normal people” with no plans to carry weapons, he noted. Now, “they want to defend our city together.”

The wedding took place as Russian troops continue to press toward the capital. On Sunday, several civilians were killed in a mortar attack while trying to flee from the neighboring suburb of Irpin. With stores and businesses shuttered across the capital, civilians have joined the fight en masse. Many of them, like Filimonova and Filimonov, have joined the Territorial Defense Forces of citizen volunteers in the Ukrainian military.

Before the war, Filimonova worked as the head of a scout organization. Filimonov led an information technology company. They joined the force, Filimonova said, “because here we have everything we love, and we have to defend it. We have no intention of giving it away to the enemy.”

The wedding began, as they often do, with the bride walking down the aisle. In this case, the aisle was a small patch of grass off a busy road in Kyiv, next to a checkpoint and a parking garage where men and women in uniform rushed to arrange caviar and salmon hors d’oeuvres. 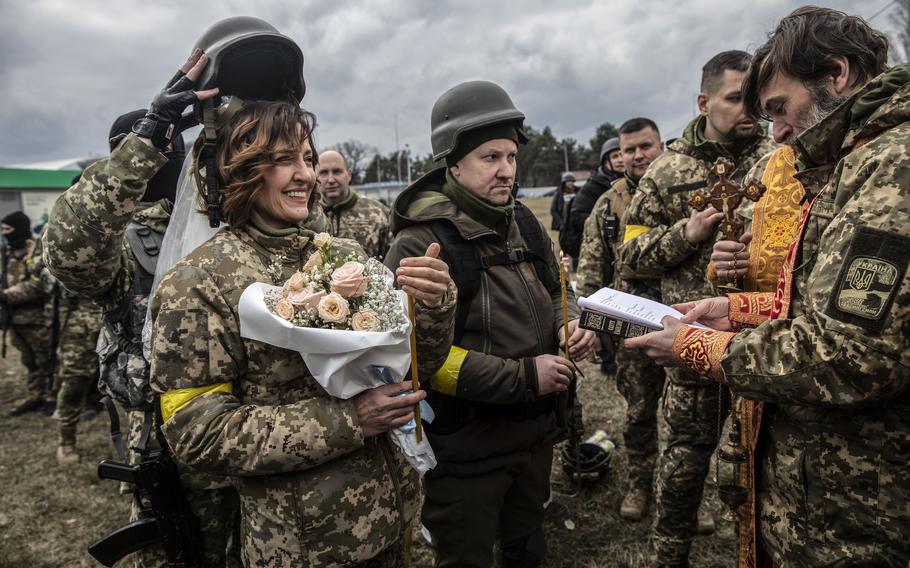 A military helmet is lifted over Filimonova at the wedding ceremony. (Heidi LevineHeidi Levine/for The Washington Post)

Filimonova was glowing in a simple veil clipped to her short hair, which she had curled for the occasion. Ukrainian musician Taras Kompanichenko, who plays the lira, a traditional folk instrument, provided live music. He was also wearing fatigues.

As Filimonova began to stroll down toward the makeshift arbor, marked by a Ukrainian flag erected in the ground, speakers blasted an instrumental version of “Here Comes the Bride.” On her sleeve was the yellow armband signaling she belongs to the Territorial Defense Forces.

It was the first time the couple had seen each other since the war began late last month. “It is hard to call it unconditional happiness in this situation, but we surely feel uplifted,” Filimonova said after.

The Rev. Dmytro Karan helped preside over the ceremony. His vestments and cross were draped over his military uniform. The couple’s 18-year-old daughter, Ruslana, was watching by video call.

The newlyweds each held a thin candle as Karan went through the rites, which included spreading incense and having the couple hold hands and walk in a circle together. When the Orthodox ceremony reached the moment at which a crown is traditionally held above the bride’s head, an attendee raised a military helmet above her instead. 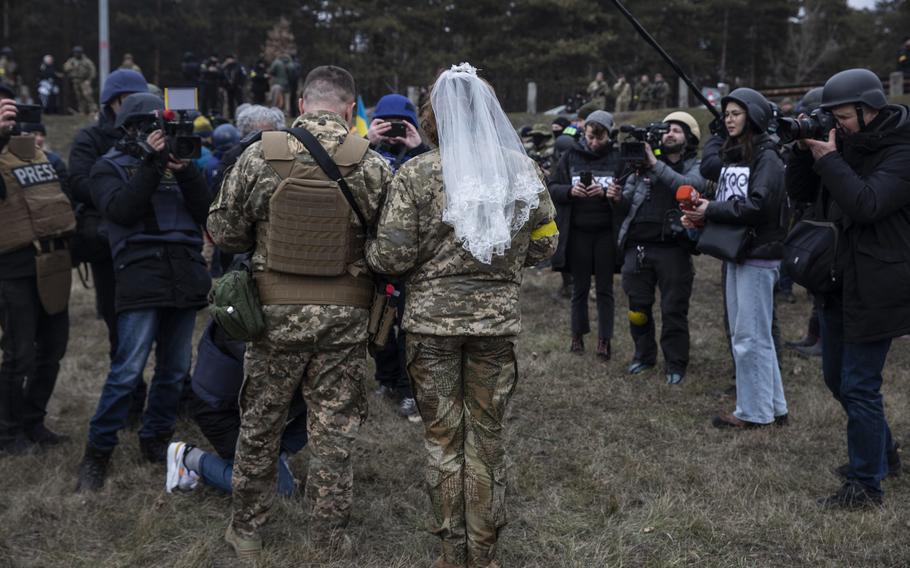 “As chaplain I cannot use any weapon. So I’m left with my words and prayers,” Karan said in an interview. “My weapons are different, like liturgies, confessions, prayers or even wedding ceremonies like this one.” He added, “My duty is to be with soldiers who are fighting for our land and provide them with spiritual support.”

Before the ceremony, Karan said, the couple made their confessions. “They tried to purge their hearts and minds,” he said. “Indeed, they really wanted to get married.”

Like any good wedding, the occasion also included gifts. One guest held a Philips electric kettle, a convenient present for a couple working in freezing conditions on the front line. On the box, he wrote a message denigrating Russian President Vladimir Putin. Another attendee gifted a pressure cooker.

Then flower petals began to waft down from a drone flying overhead, and the crowd burst into the national anthem. The guests held weapons in one hand and white roses in the other. One by one, they walked up to Filimonova to congratulate her, each handing her a flower until she was holding a full bouquet.