After Putin’s invasion of Ukraine, Moldova worries it might be next People in Chisinau, the capital of Moldova, are nervous about what's happening in neighboring Ukraine. (Gianmarco Maraviglia/for The Washington Post)

CHISINAU, Moldova — There have been no air raid sirens in Moldova, no explosions and no casualties, but already some of the turbulence and anxiety of war is starting to build.

People trade jittery messages on social media as Russian troops move through neighboring Ukraine. Some Moldovans are stockpiling foreign currency and drawing up plans to flee. Many, seeing how abruptly lives collapsed in Ukraine, say they fear the potential for catastrophe in their own country: All it takes is for Russian President Vladimir Putin to expand his ambitions.

“You never know what is in the mind of a crazy person,” said Evgheni Liuft, 32, who lives in Moldova’s capital of Chisinau.

Ten days into a conflict that is shifting alliances and upending the world order, the repercussions are hitting most directly in countries such as Moldova — post-Soviet nations that balanced for years between East and West, and are now realizing the middle ground is untenable.

In Moldova, the war has accelerated the drive to align fully with Europe. On Thursday, the country placed an application to join the European Union, in what its prime minister described as a vote for “freedom.” Moldova has also strained to accommodate more than 250,000 Ukrainian refugees who have crossed its borders, the prime minister noted. In a visit Sunday to Moldova’s capital, U.S. Secretary of State Antony Blinken called the country a “powerful” example of a democracy moving forward, not backward.

But while Moldova has never felt closer to Europe, it has also never felt more vulnerable to the Kremlin. Russian troops are pushing toward port cities along Ukraine’s southern coast, including Odessa, 30 miles from Moldova’s border. Several days ago, addressing his security council, Belarus’s authoritarian leader, Alexander Lukashenko, displayed a battle map that showed an arrow pointing toward Moldova.

Security analysts say Russia’s sluggish progress so far in Ukraine could reduce the chances that Putin seeks to enlarge the scale of the invasion. Mihai Popsoi, the vice president of Moldova’s Parliament, said in an interview that intelligence officials see no indications of a direct threat — “although [Lukashenko’s] map might have you question my words,” he said. Still, he said, every former Soviet nation is antsy. Moldova has already closed its airspace and declared a state of emergency.

“Things can go south any day,” he said. 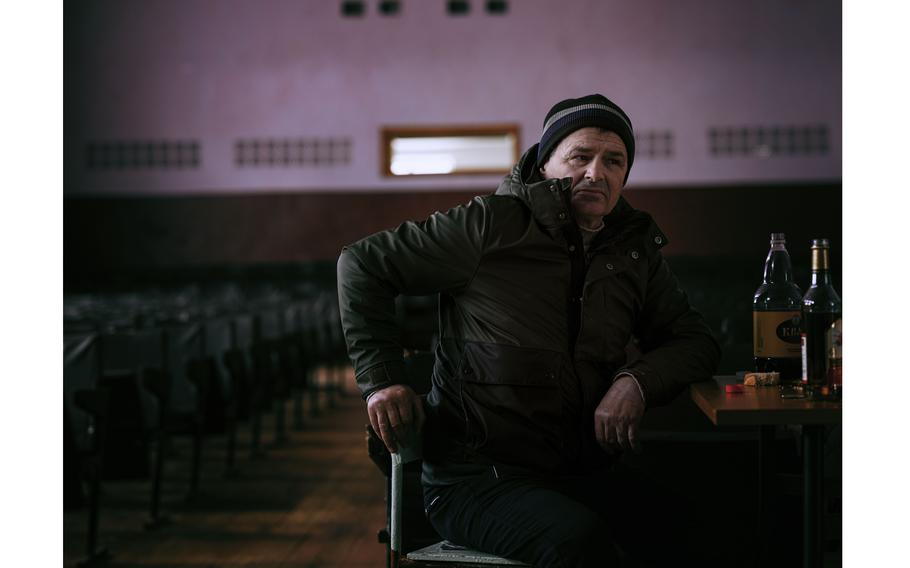 Like his bandmates in Taslic, Transnistria, lead singer Anatoly was wary of sharing his views on Russia or the war. (Gianmarco Maraviglia/for The Washington Post)

There is one more reason Moldova is exposed: It already has an estimated 1,500 Russian troops within its internationally recognized borders. Those troops — which Russia describes as peacekeepers — are based in an area known as Transnistria, a breakaway enclave that functions in practice as an independent nation, where Moldovan authorities admit they have no control.

But there has been one legitimate signal of the potential for tension. One day after Moldova applied for E.U. membership, Transnistrian leaders issued a statement making clear they had no interest in following. They reiterated a demand to create “two independent states.”

Transnistria is a tiny strip of land, with a population of about 500,000, that on a map looks like a ridge of scales running along Moldova’s back. It is also a place that speaks to a strategy Russia had been using before its full-scale Ukrainian invasion: fostering beachheads of pro-Kremlin influence in former Soviet nations.

Transnistria was born out of a brief early 1990s war amid the Soviet collapse — Moldova wanted independence and to outlaw Russian as an official language; Transnistria wanted to maintain Soviet ties. But in the long aftermath, after the war ended in a stalemate, Russian leaders, including Putin, have seen it in their interests to help prop up the Transnistrian government with subsidies.

To many Moldovans, Transnistria has become an easy-to-deride U.S.S.R. time capsule. It’s a place of Lenin statues, hammer-and-sickle flags and once-grand Soviet architecture in decay. Transnistria has also paid a price for its relative isolation. Unrecognized by the United Nations, it has a currency, the ruble, that is virtually worthless outside its borders. International bank cards don’t work at Transnistrian ATMs. Salaries are low. For all of Russia’s influence, the biggest power in Transnistria is a monopolistic company, Sheriff, that operates with scant oversight and controls everything from the gas stations to the supermarkets to the soccer club. 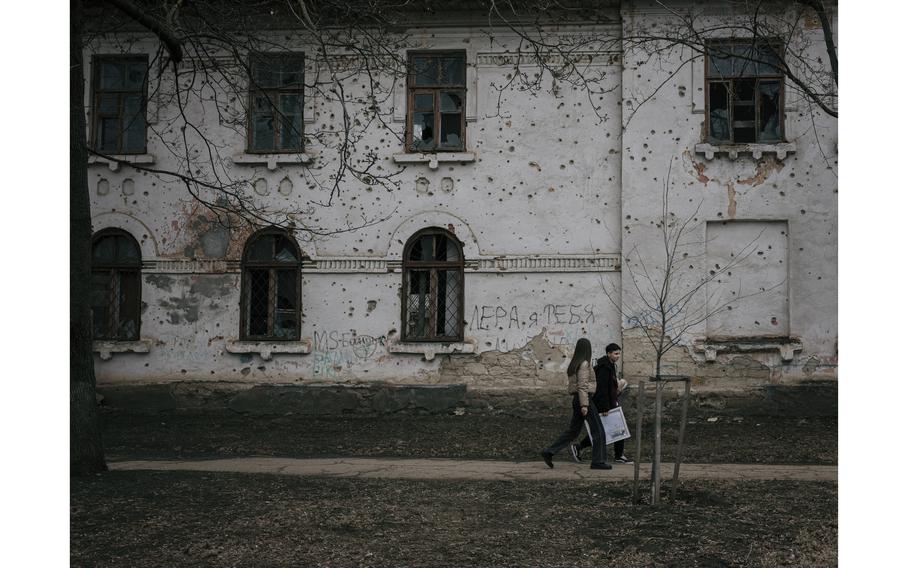 A building scarred by artillery fire in Bender, Transnistria, is among the remaining traces of a war in the early 1990s. (Gianmarco Maraviglia/for The Washington Post)

Those complexities make it harder to pinpoint Transnistria’s role in a potential conflict. Some Transnistrians have Russian passports, for instance; many others have Moldovan. Most of Transnistria’s exports go to the E.U. Transnistrian President Vadim Krasnoselsky said Sunday that Transnistria “does not pose a military threat, and does not hold plans of an aggressive nature.”

But it’s also clear that Transnistria is following Russia in downplaying the war, which Putin has referred to only as a “special military operation.”

Transnistrian newspapers and television channels scarcely mention the conflict — and people who live there have gotten the signal that the topic is off-limits. In one Transnistrian village this weekend, three friends — fellow musicians — who had gathered to eat kielbasa and drink vodka were happy to talk about their families. Or Soviet times. Or the music they played: Ukrainian, Russian and Moldovan tunes from the 1970s and 1980s. But they resisted any questions about their feelings on the war or Russia.

“I am neutral,” said the pianist.

They drank some more.

“No politics,” said the guitarist, who did not want to give his name. 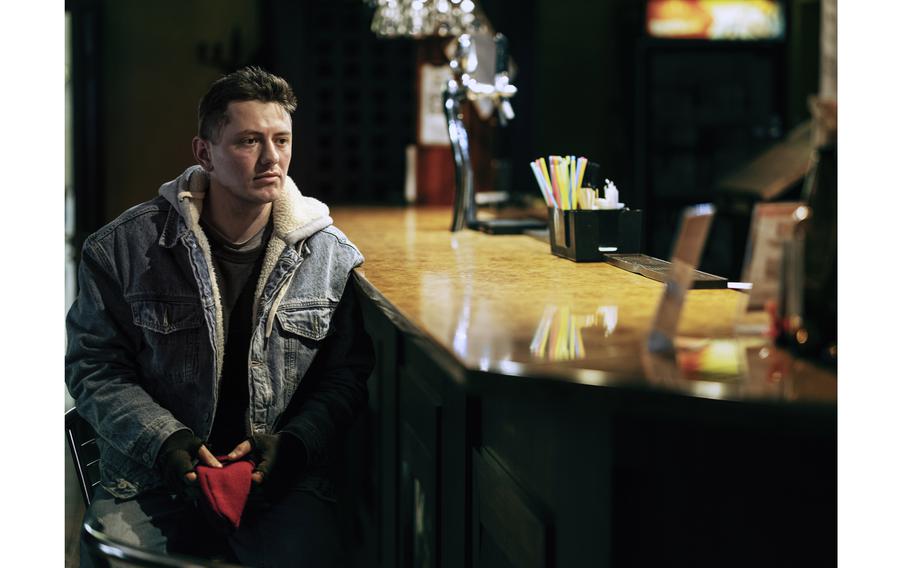 Artist Andrei Platonov said he is among those in Tiraspol, Transnistria, who oppose Putin's war on Ukraine. (Gianmarco Maraviglia/for The Washington Post)

In the Transnistrian capital of Tiraspol, an artist, Andrei Platonov, 29, said he is in the minority: He vehemently opposes the war. He said he “hates” Putin, and he gets his information foremost from YouTube — not Transnistrian TV. But he said he’s wary of sharing his views publicly. He said he lacks the money to leave even if he wanted to. Speaking in English, Platonov began to explain the thing he was most fearful of — but he wanted to make sure he got the words right. So he typed his thoughts in Russian into Google Translate and showed the phone.

“No freedom of speech and they imprison for rallies,” it said.

The peace deal signed in 1992 between Transnistria and Moldova came after a war that left some 1,000 people dead. Today, there are still a few markers on both sides of buildings damaged in battle, or walls peppered with ammunition. The war, said Iuri Sclifos, 57, who fought for the Moldovan side, was a “huge mistake.”

“Nobody wanted it and nothing good has come of it,” he said.

Moldova’s aim to join the E.U. now adds some urgency to finding a way out of settlement talks that have been deadlocked for years. While Cyprus managed to join the E.U. despite a territorial dispute, many experts say Moldova would give credibility to its E.U. bid by resolving a frozen conflict that includes Russian troops. “Particularly from the point of view of security,” said Iulian Groza, head of the Institute for Strategic Initiatives, a Moldovan think tank, and a member of Moldova’s security council.

But the path toward membership figures to be long. In the same week Moldova applied for E.U. membership, so did Georgia — both prompted by a dramatic plea from Ukraine for “immediate membership.” They join a list of countries, including Albania and North Macedonia, that have been trying to join the bloc for years, while encountering resistance from Brussels over the idea that the 27-nation club has already admitted too many members with corruption and weak rule of law.

More than two-thirds of Moldovans support the idea of E.U. membership. But many young people, who grew up after the Soviet collapse, say their country has urgent vulnerabilities that a years-long process will not be able to solve. In Chisinau this past week, at a modern work-share studio paid for in part with U.S. government funding, the employees of a cryptocurrency company sat around a table and spoke with fear about the prospect of war spilling over. In such a scenario, they said, Russian troops in Transnistria could easily enter the fight. They said Moldova’s own military is weak and small. They believe Moldova could fall under Russian control with alarming speed.

“I am going to London next week,” said Tudor Cotruta, 33, the founder of the company, who said he wanted to leave before being conscripted into a losing war. A building scarred by artillery fire in Bender, Transnistria, is among the remaining traces of a war in the early 1990s. (Gianmarco Maraviglia/for The Washington Post)

Two other employees, Olga Cebotari, 24, and her boyfriend, Liuft, said they were also packing their bags.

So many people had plans to leave that the company, in the coming days, would no longer occupy its work-share space.

“You can cut the sadness in the air, it’s so thick,” Cotruta said.

A war in Moldova was still unlikely, they said. But seeing what had happened in Ukraine, even low-probability outcomes now felt like something worth hedging against.

“It’s the thought of living in a country where you can’t express yourself anymore,” Cebotari said. “That is what scares me the most.”

Viorel Barbanoua contributed to this report.