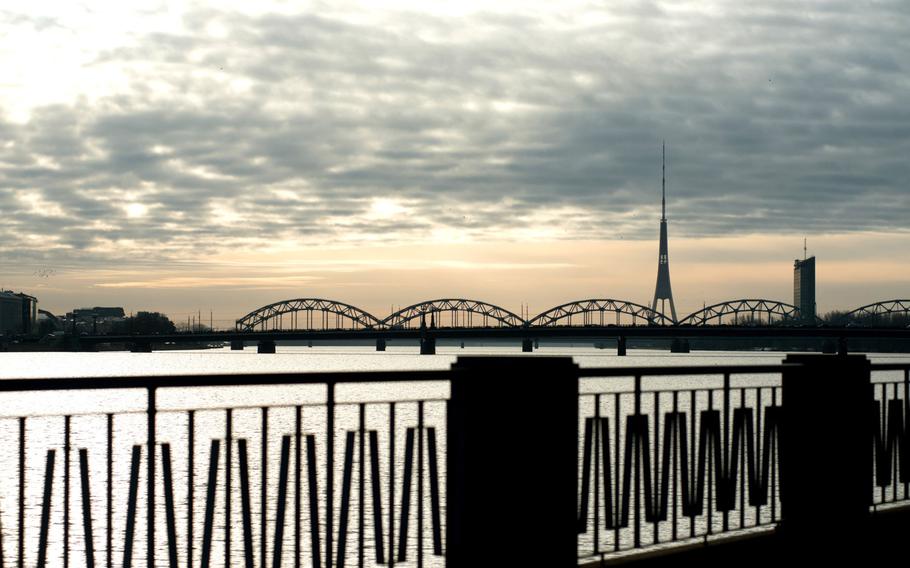 The Riga radio and television tower stands on the skyline beyond the River Daugava in Riga, Latvia, on Feb. 28, 2019. (Peti Kollanyi/Bloomberg)

TALLINN, Estonia — The Baltic countries are warning their NATO allies that Russian military exercises underway in Belarus could lead to a permanent Russian troop presence in that Eastern European country, with alarming risks for the long-term security of the Western alliance.

The Russian military buildup in Belarus appears aimed at Ukraine for now, but the new deployments are sending chills through Belarus's Baltic neighbors - Lithuania, Latvia and Estonia - as well as some Eastern European countries because of the possibility of a game-changing Russian presence on or near their borders.

Between 20,000 and 30,000 Russian troops along with warplanes, missile batteries and air defense systems have moved into Belarus in recent weeks, officially to participate in a military exercise, according to Russia's Defense Ministry. The exercise, called United Resolve 2022, began Thursday, and Russian officials have said the troops will go home when the exercise ends on Feb. 20.

But the size and nature of the exercise - which comes at a time when Russian President Vladimir Putin is demanding a retrenchment of NATO's presence in Eastern Europe - have given rise to fears that Russia may seize the moment to leave the troops in Belarus indefinitely, extending Russia's reach deeper into Europe, Western officials say.

Baltic leaders have been raising the alarm in recent days in meetings with NATO allies, warning that an ongoing Russian troop presence in Belarus would significantly shift the military balance of power in Russia's favor. They have called for additional NATO reinforcements along the alliance's eastern flank to redress the imbalance.

"The unprecedented mobilization of Russian troops in Belarus is of particular concern," Lithuanian Prime Minister Ingrida Simonyte said following a meeting earlier this week with British Prime Minister Boris Johnson, according to comments quoted by the Lithuanian government's press service. "It is very important for Lithuania to have an increased NATO partners' presence in Lithuania," she added.

NATO has already dispatched reinforcements, including thousands of troops, ships and aircraft, to Eastern Europe in an effort to reassure nervous allies that the alliance will stand by them in the event of a major military escalation.

More are needed in light of the "probable" intent of the Russian troops to remain in Belarus, Poland's Foreign Minister Zbigniew Rau told U.S. Secretary of State Antony Blinken during their recent meeting in Washington, according to the official Polish news agency. Poland also shares a long border with Belarus.

"We are trying to convince people that deterrence needs to be increased, that more Atlantic Alliance troops are needed in the face of a potential threat growing on the other side of our border," the agency quoted Rau as saying.

Western officials say the Russian deployments pose no imminent military threat to any part of Europe other than Ukraine. The immediate fear is that the military exercise underway in Belarus is in preparation for an attack on Ukraine, given that almost all the Russian forces in Belarus are positioned along its southern border with Ukraine, according to Thomas Bullock, a senior analyst with Janes, a defense intelligence provider.

A longer-term concern for the Baltics, however, is the vulnerability of a stretch of land along the Polish-Lithuanian border known as the Suwalki Gap. The area separates Belarus from the Russian enclave of Kaliningrad, a pinprick of territory that remained part of Russia after the collapse of the Soviet Union in 1991.

If Russia were to seize control of the 40-mile gap and link the Kaliningrad enclave with Belarus, the Baltics would be cut off from the rest of NATO and unable to receive reinforcements by land, said Kusti Salm, the permanent secretary of Estonia's Ministry of Defense. "Now we are a peninsula. We would become an island," he said.

If there were no Russian troops in Belarus, NATO allies would probably be able to detect preparations for such an offensive weeks in advance, he said. But with Russian troops already in the country, the warning time would be reduced to "days or even hours."

"This dramatically changes the calculus for all of NATO because it reduces the early warning time," Salm said. "Belarus gives Russia a huge operational advantage."

The Baltic countries, which were formerly part of the Soviet Union, have long felt uniquely vulnerable among NATO allies for reasons of geography and history, and they are among the most vocal advocates for a robust Western response to the Russian threat to Ukraine. Their proximity to Russia and recent memory of Russia's occupation before 1991 leave residents with a heightened fear of another war in Europe, said Estonia's foreign minister, Eva-Maria Liimets.

"Our understanding is more realistic," she said. "We really sense the threat here because of our history and our experience."

NATO officials have said they share the Baltics' concerns. Rob Bauer, the Dutch admiral who heads NATO's Military Committee, did not rule out future adjustments to the alliance's force posture in the area.

"It very much depends, of course, on whether the Russian troops in Belarus remain in Belarus," he told journalists during a visit last week to the Lithuanian capital, Vilnius.