Under threat of a Russian invasion, Kyiv shrugs — and prepares for war 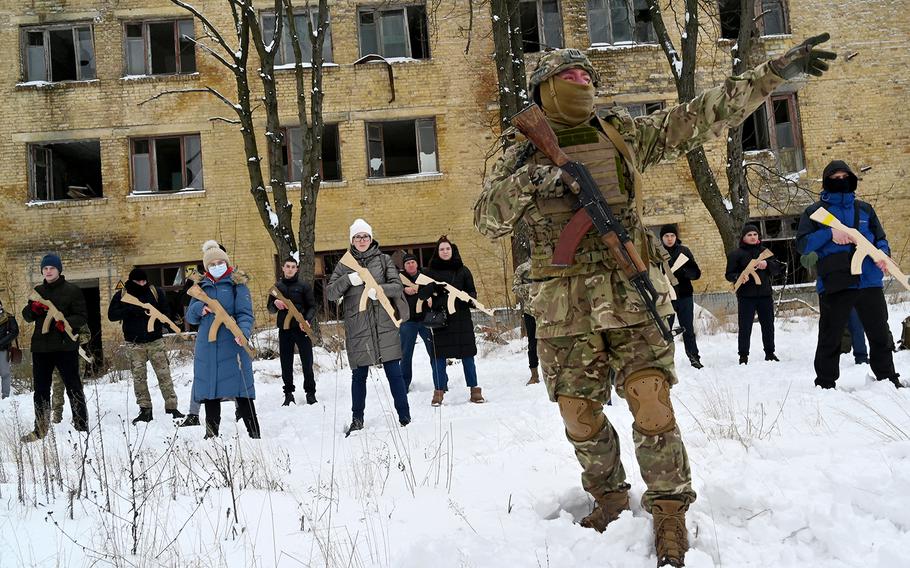 A military instructor teaches civilians holding wooden replicas of Kalashnikov rifles, during a training session at an abandoned factory in the Ukrainian capital of Kyiv on Jan. 30, 2022. (Sergei Supinsky, AFP via Getty Images/TNS)

KYIV, Ukraine (Tribune News Service) — Tens of thousands of Russian troops stand battle-ready just a few hundred miles away. The U.S. repeats warnings of a “horrific” invasion that could come at any hour. Friendly nations speed up weapons shipments to help Ukraine’s work-in-progress army fend off an attack.

None of that fazes Vasily, a 26-year-old street performer in an oversize bear suit in Kyiv’s central square. Only eight years ago, the Maidan was thronged with tens of thousands of protesters who succeeded in ousting their pro-Russian president, a seismic event that spurred Moscow to seize Ukraine’s Crimean peninsula. These days, the plaza is empty of demonstrators, with Vasily and his colleagues — one of them dressed as Tony the Tiger — taking selfies with the occasional tourist.

“War? There’s absolutely no war here. Look around you,” he said, sweeping a furry arm across the snow-speckled tiles of the square. “Just come here and have fun.”

The blase attitude is not uncommon here in Kyiv, where many residents appear to be confronting the prospect of an enemy at the gates with a mix of stoicism and resignation, if not outright bewilderment at the presence of so many foreigners asking darkly about imminent conflict.

That’s perhaps of little surprise, given the ongoing war between Ukrainian security forces and Russia-backed separatists in the country’s east, a grinding conflict now entering its ninth year. Although almost 14,000 people have been killed, 34,000 wounded and millions displaced, in many ways the war has hardened into routine.

And since the nearest point of conflict is a 14-hour drive from Kyiv, it’s easy to feel far away, said Max Ivanov, a 28-year-old graphic designer from the coastal city of Odessa as he strolled with his girlfriend in a park on a cold recent morning.

“I don’t listen to news. I don’t watch TV. In Kyiv, in Odessa, we just can’t feel it,” he said of the mounting tensions between Russia and Ukraine.

“It’s the usual situation for us. We’ve become used to it.”

Elsewhere, there’s little sign that this elegant capital perched on the Dnieper River is on borrowed time. Despite subfreezing temperatures, Kyiv residents spill out onto the street in front of wine bars like the P’Yana Vishnya, form chattering hubs around Turkish kebab joints and try to beat the weekend rush at a local shopping mall.

For those who believe otherwise, the most telling proof is that a number of foreign embassies have sent nonessential staff packing. That includes the Canadian and British missions, as well as the U.S. Embassy, which on Wednesday instructed American citizens in Ukraine looking for flights out to get in touch for financial or booking assistance.

Hyuna Ki, a 34-year-old medical student studying in Kyiv for the last three years, said the South Korean Embassy has also urged citizens to leave. She’s considering it, she said, but so far “it’s only the media spreading the news that something will happen.”

“Those living here don’t consider it like that,” she said, adding that she was waiting for the university to switch to online learning as a sign of impending threat. In the meantime, she was checking the South Korean Embassy’s website every day.

Her classmate Brasin-Tamarapre Odushu, 20, was equally unruffled when discussing the chance of hostilities.

“We don’t react because we haven’t seen anything. It’s just tensions — I’m used to it back home, and this is the same thing here,” he said, adding with a slight smile that his parents back home in Abuja, Nigeria, were also unconcerned.

“Our embassy here isn’t telling us to evacuate. So far, they’ve distributed a list of emergency contacts, but that’s it.”

Elsewhere, preparations for a bruising fight are underway.

On Thursday, with a blizzard and winds blowing the snow sideways, a Western Global cargo jet landed in a corner of Boryspil airport, 18 miles outside Kyiv, and rolled to a stop near a row of 10 olive-green MAZ army trucks.

Inside the plane, instead of tired-looking rows of economy class seats, lay a jigsaw of rails, plates and rollers that a Belgian technician who gave only his first name, Mike, used to unload pallets bearing 85 tons of 40-millimeter MK-19 grenade cartridges. It was the seventh delivery of U.S. military aid allocated in a $200 million assistance package aimed at bolstering Ukraine’s army.

As a forklift positioned the cartridges into a back of a MAZ truck, a 20-year-old Ukrainian soldier watched approvingly from a distance.

“If this helps avoid conflict, if it’s just for protection, then I’m happy it’s here,” said the soldier, who declined to give his name because he was not authorized to speak to the media. “Of course I don’t want war to come.”

Besides the army, the government is also preparing a reserve force comprising more than 100,000 citizen-soldiers. In Kyiv’s parks on weekends, out-of-shape computer software engineers and housewives, among others, run through military drills with wooden machine-gun mockups.

One person who appreciates the increase in readiness among his fellow Kyiv residents is Leonid Ostaltsev, a bearded 34-year-old with the look of a no-nonsense body-builder. A veteran of the war in eastern Ukraine, he opened Pizza Veterano, a military-themed restaurant that employs other former soldiers and that is famous for giving free pizzas to anyone who fought. The tables are topped with glass display cases full of bullets.

A sign on the door now offers a free pie to anyone who has legally purchased a firearm in January with the intention of defending the country.

“It’s important to show that we as veterans support people’s decision to buy a weapon, to also become a defender, not just to be defended by someone,” he says.

Surveys show that more than one-third of Ukrainians are willing to take up arms if Russia invades.

“Before, people here don’t want to think about the war. ... But after Russia brought more troops, people here started to understand it’s not just propaganda, not theory. It’s real — and they want to protect their homes,” Ostaltsev said.

That shift in thinking is a measure of the changing attitude toward Russia since 2014, he added. Although Russian President Vladimir Putin often waxes on about Russians and Ukrainians being one people — as he did in a recent 7,000-word essay — there is a growing sense among Ukrainians that Russia is a dangerous neighbor, one ready to revisit the worst of the Soviet crimes upon them.

On a verdant slice of the Pechersk Hills overlooking the Dnieper, the Holodomor Museum recounts the story of the Great Famine (“holodomor” means “death by hunger”), when between 1932 and 1933 almost 4 million Ukrainians starved to death as a result of Soviet agricultural policies.

For Iryna Kurhanska, the 26-year-old deputy director of the museum’s exhibition department, the rise in hostilities makes the museum more relevant than ever.

“The Russians committed genocide. They wanted these people to die and take their land. This is what we see now again,” she said. “The imperial ideas of Russia are still very powerful today. Nothing has changed. The Soviet Union collapsed, but we see that the policies haven’t changed.”

Kurhanska and her friends have been making plans in case of an invasion: packing suitcases, arranging how to communicate with family members, figuring out how to secure their homes if they have to leave.

Outside the museum, the sun was shining, and children used plastic trays to slide down a snowbank. Katya Kiriyeva, a university lecturer, kept an occasional eye on her 7-year-old son, Sasha, as he tumbled down the hill.

“We’re ready. We’ve made plans to go to a shelter — when I was in school we studied where to go in the metro to hide from bombs,” she said.

Sasha’s school, fresh from coronavirus closures, is ready to return to distance learning if hostilities break out.

“We’re ready to run away,” Kiriyeva said. “But we’re here now because nothing has happened.”