Russian media is focused more on NATO than Ukraine this time 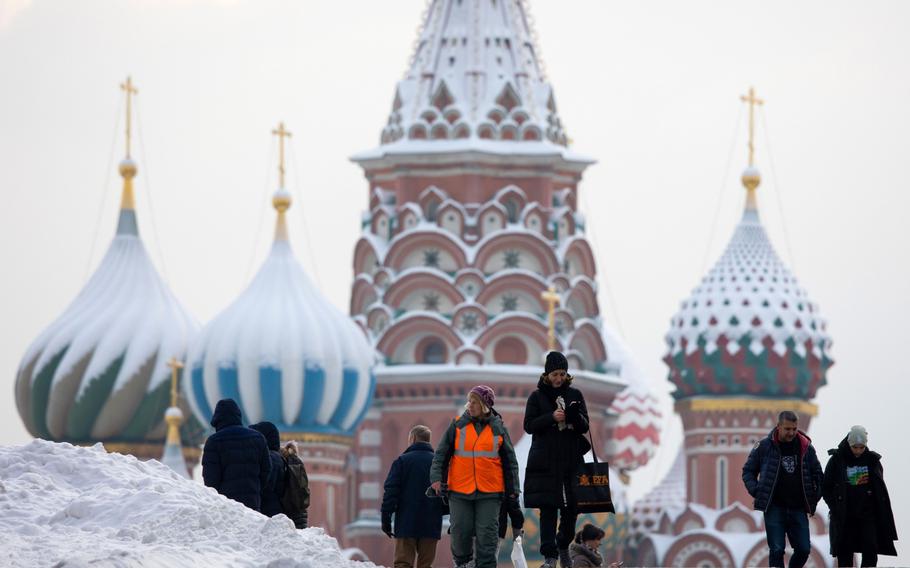 With international tensions high over the Kremlin’s massing of troops toward its border with Ukraine, there’s an important difference from the way Russian media treated a similar buildup last year: Moscow’s main focus now is NATO, rather than Kyiv.

The conclusion comes from a new data analysis of articles in “.ru” Internet domain names by Semantic Visions, a Prague-based data analytics company that offers risk assessment to corporations.

That the North Atlantic Treaty Organization should appear more in Russian coverage of the current buildup fits with the way Moscow has this time put retrenchment by the military alliance at the heart of its written demands to the Biden administration. There were no such demands last spring.

The fact that hostile coverage of Ukraine itself has been less prominent may also support the argument that Russian President Vladimir Putin has — as his government publicly insists — no plans to declare war on Ukraine and is instead moving troops to stoke a sense of crisis, so as to strengthen his diplomatic hand with the West.

The analysis comes as updated data from a similar exercise at the start of the year showed that a sharp decline in hostile Russian media coverage of the Ukraine tensions during the weeks to Jan. 5 has since reversed. That’s a potentially discouraging sign, given that governments tend to use media to prepare their populations for conflict with another state.

Yet that picture changes once the U.S. and NATO are stripped out of the search. The recent rise in negative Russian coverage of Ukraine, as well as a previous high in November when the troop movements were first made public, becomes less pronounced. The impact of controlling the data for NATO is much smaller on reporting around similar troop movements last Spring.

If war were imminent, as the U.S. has warned it may be, then the Kremlin could be expected to use Russia’s largely state-controlled media to boost popular support for such a conflict, with its potentially significant human and financial toll on ordinary Russians.

That chimes with recent public statements by top Russian officials since intense diplomacy began after the New Year holidays in response to Moscow’s demands for binding security guarantees from the West.

Putin and Foreign Minister Sergei Lavrov have attacked the U.S. and its allies for rejecting their main demands, namely that NATO must ban Ukraine from future membership and withdraw its forces to positions they held in 1997, before the accession of central and eastern European members. However, Lavrov also has indicated there’s room for talks on “secondary issues” set out in U.S. responses to the Kremlin. He and U.S. Secretary of State Antony Blinken are scheduled to hold further phone talks on Tuesday.

Russia has left the door open to a wider conflict, saying it would respond if Ukraine tries to take back lost areas in the eastern Donbas region by force, something the government in Kyiv says it has no intention of doing. The caveat was followed by Western claims, also made without evidence, that Russia was preparing false flag operations to legitimize invasion.

News coverage is just one circumstantial indicator of Russia’s intent among many. The U.S. and the U.K. continue to warn that a major conflict is possible, citing differences in the nature of the current Russian military deployment compared to last Spring’s. Russia continues to insist it has no plans to invade Ukraine.

Semantic Visions trawled just under 28 million news items for material from July 25 2020 through Jan. 25 2022. The searches took in news sites as well as blogs and government, company and academic websites, across 24,000 ‘.ru’ domains. The survey produced almost 77,000 relevant articles, falling to 47,000 once those focused on NATO and the U.S. were stripped out. It did not include social media content.