(Tribune News Service) — Alexander Volkov of Minneapolis was in Ukraine last month visiting relatives with his wife, Tanya, as a threatening throng of Russian troops were gathering at the border.

The mood was serene as Kyiv residents looked forward to the upcoming holidays and "went about their usual business," he said. But that masked an anxiety many of them felt.

"They know that, well, if anything happened, it will be really brutal," the software architect for a large health care company said, referring to family members. "Because, you know, the more than hundred-thousand troops, heavy machines and all (these) heavy weapons are being deployed. If they decide to (invade, it) will be basically a massacre," he said.

For scores of Ukrainian Americans like Volkov, Russian President Vladimir Putin's menacing maneuvers are more than geo-politics among world powers. They are personal, involving not just the heritage of the nation they identify with, but also family and friends who could be casualties of a one-sided war.

The impending threat against Ukraine by Putin could have global consequences and cost the U.S. and North Atlantic Alliance countries millions in aid to protect the vulnerable nation against Putin's intent to reestablish Russian dominance in the region.

So far, Volkov supports the decision by President Joe Biden not to send U.S. troops.

"I think that there is an obligation (for the) United States as well as Britain to support Ukraine as much as possible," said the 47-year-old immigrant from Kyiv, citing the Budapest Memorandum. "But I believe that support should be more like, political, diplomatic, maybe equipment-wise and training. But not direct involvement with the troops on the territory of Ukraine at this point."

The Budapest Memorandum is a 1994 agreement between the U.S., Russia, the United Kingdom and Ukraine to respect Ukraine's sovereignty and "to refrain from the threat or use of force." The agreement effectively convinced the Ukrainian government to relinquish the world's third largest nuclear arsenal at the time.

On another continent, Ukrainian Americans, confident in Ukraine's commitment to fend off an invasion, still anxiously await the next move.

Over 1 million Ukrainian Americans live in the U.S., according to the 2019 U.S. Census, and Ukrainians comprise 15% of the 30,000 total refugees who resettled in the U.S. during former President Donald Trump's administration, according to The Washington Post.

Most Ukrainian Americans live in the mid-Atlantic and Upper Midwest with a large cluster on the west coast. New York, Pennsylvania and California have the largest concentrations with more than 100,000 each, according to the Ukrainian National Association Inc.

USA TODAY talked with members of the community about living with the looming threat over Ukraine.

Some are wary of pledges from NATO and the U.S. to provide assistance, while others feel President Joe Biden is taking the right steps in approaching the conflict. All are worried about their families in Eastern Europe.

Biden on international aid to Ukraine

During his first press conference of the year, Biden said U.S. and NATO allies would respond with "severe costs and significant harm on Russia and the Russian economy" if Putin invades Ukraine.

But he added the response will depend on the extent of Russia's actions.

"It's one thing if it's a minor incursion and we end up having to fight about (what) we have to do and not do," Biden said.

"This is the largest country fully within Europe threatened by another country that is seeking to limit the democratic rights of people," the Minneapolis native said.

The Russian government seeks to impede the spread of democracy, especially to countries along its borders, according to Iwaskewycz.

"Russia is trying its hardest to prevent democratic will, the freedom of choice, to happen in each of those countries," he said. "If one country falls ... I do believe other countries (will) as well."

Taras Rafa, a Ukrainian American and systems engineer living in Minneapolis, thinks the U.S. government is moving in the right direction on the Ukrainian conflict, but too slowly.

"This war has already started, but on the diplomatic front," he said. "Russia's Putin seeks attention and needs to show people how 'big and important' his country is on the international diplomatic arena."

Biden has said the U.S. will likely not send troops to help defend Ukraine against a Russian invasion, though the Pentagon has put 8,500 military service members on "heightened alert" and millions of dollars have already been spent to beef up the country's military capabilities.

Marta Kelleher, president of the United Ukrainian Organizations of Ohio, said the U.S. "has to lead with these preventative measures to avoid war."

The organization, which represents the Ukrainian diaspora in Ohio, is advocating for pre-invasion sanctions, such as against the Nord Stream 2 pipeline which could be used to leverage Russia because of its reliance on gas revenues for economic development — to persuade the country to avoid further escalation.

"It's a common interest and as expected their concerns are just as great as Ukrainians because Ukraine has been the buffer between Russia and the countries that flank Ukraine on the western side," Kelleher said. "Their concern is that buffer will no longer be there."

A multi-sided approach is needed to sway Russia, said Iwaskewycz.

"My hope would be that there would be very strict financial sanctions on Russia, but also the commitment of some significant degree of American and Western — even NATO — military forces to support Ukraine," he said.

Ukrainians will fight back if necessary

Ukrainians facing the threat of an invasion from their more powerful neighbor receive moral and financial support and prayers from their U.S. relatives.

Andy Fedynsky, director of the Ukrainian Museum Archives in Cleveland, has a cousin who lives in western Ukraine. He said Ukrainians are protective of their independence but calm in the face of escalating conflict because they have lived through so much of it.

"People in Ukraine are ... resolute. They want to defend their independence, their sovereignty. They're relatively calm because they've lived through this for a decade and more," he said.

Fedynsky said there is "a great deal of apprehension here in the community" about what is happening in Ukraine. Ukrainian Catholic churches in northeast Ohio recently have had liturgies to pray for peace in the country.

"We're gratified we don't have to rely just on prayer but we have very strong support," the former Democratic congressional aide said.

Kelleher still has family in Ukraine, including an elderly aunt who lives in Donbass, a conflict zone in eastern Ukraine where government forces have fought Russian-backed separatists since 2014. Although her cousins have moved to the unoccupied area of the region, they can't afford to leave the country.

"It's stressful for them to live in because they're constantly listening to the artillery and the war that's going on there even now," she said. "It's brought a lot of destruction to the house they live in and fear. It's also caused some of the younger people to see there's absolutely no way to live a normal life. They have moved."

The threat of an invasion from Russia has united Ukrainians, even those who are not in the military, around defending their home, Kelleher said.

"You can sense that they're going to fight for their country," she said.

Rafa, who stays in contact with family through video calls, says Ukrainians are resilient, but that the conflict should be kept from escalating.

"The emphasis should not be on how would Ukrainians survive and fight back," he said. "The emphasis (should) be that there is absolutely no way the new active war shall be started in Europe in the 21st century. Period." 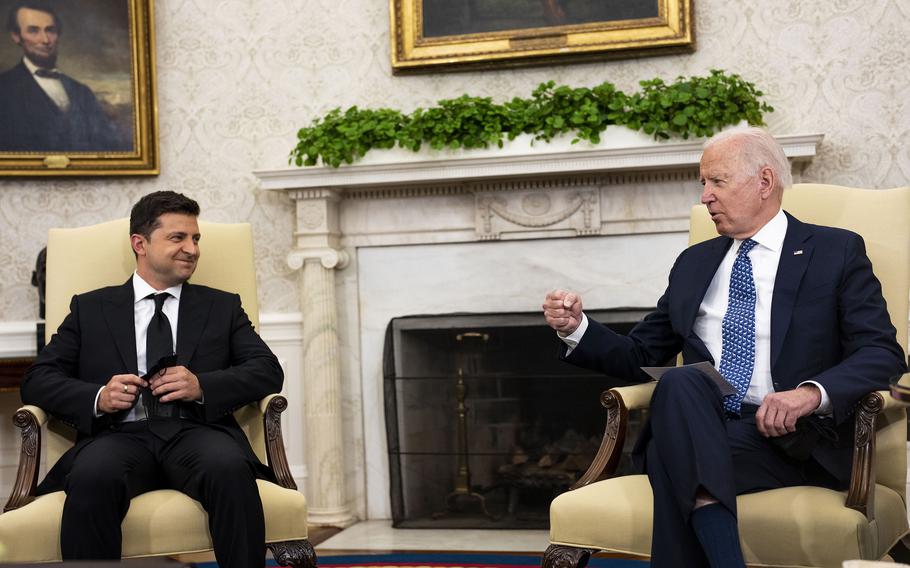