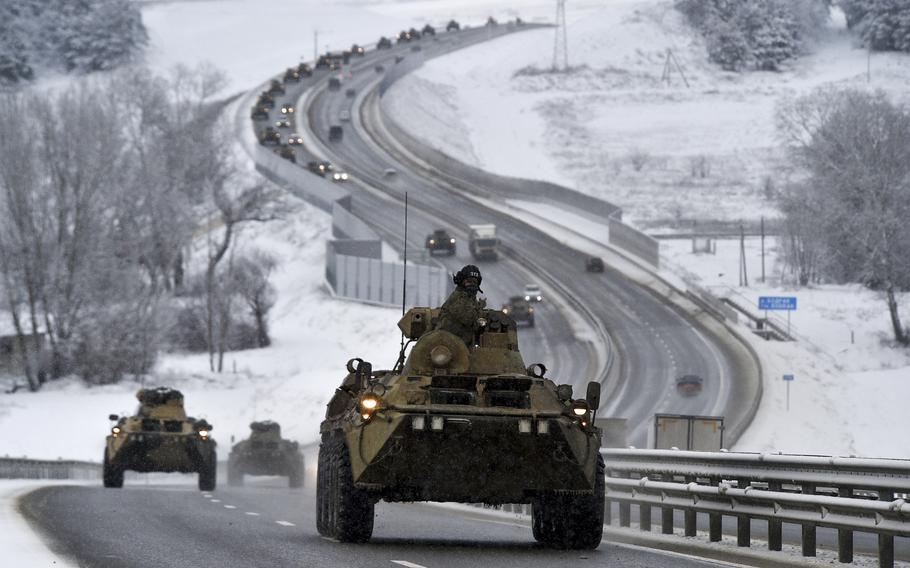 A convoy of Russian armored vehicles moves along a highway in Crimea, on Tuesday, Jan. 18, 2022. Russia has concentrated an estimated 100,000 troops with tanks and other heavy weapons near Ukraine in what the West fears could be a prelude to an invasion. (AP Photo)

WASHINGTON — A State Department official said Tuesday that an invasion of Ukraine could now come from its northern border with Belarus after Russian troops were moved into that country for military drills.

The news comes as Russia has spent weeks moving troops to its western border with Ukraine. President Joe Biden’s administration has been holding talks with Russian officials, who want a guarantee that Ukraine will never be allowed to join the NATO alliance. U.S. officials say diplomatic attempts to end the hostilities have not been productive.

“The reports of Russian troop movements towards Belarus … are concerning,” the State Department official told reporters Tuesday on condition of anonymity. “The timing is notable and of course raises concerns that Russia could intend to station troops in Belarus … in order potentially to attack Ukraine from the north.”

Chief Pentagon spokesman John Kirby said Tuesday that the Defense Department is still hopeful for a diplomatic resolution, but defense officials have gone over “various permutations” on how to get involved should Russia invade Ukraine.

“If there's another incursion [into Ukraine] and if our NATO allies request capabilities and support and resources for their reassurance, as part of NATO, we will be positively disposed to consider those requests,” Kirby said.

The State Department official did not say how many Russian troops and equipment were moving into Belarus, but said they are being conducted “supposedly under the auspices of regularly scheduled joint military exercises.”

“[Belarus President Alexander] Lukashenko has relied more and more on Russia for all kinds of support, and we know that Putin doesn't give them support for free,” the official said.

Last week, the U.S. was willing to discuss changing the “scale and scope” of U.S. exercises in the region “if and only if there was going to be reciprocity on the Russian side,” Kirby said Tuesday. However, the U.S. has not seen any signs of Russian scaling back.

The U.S. has not sent troops to Ukraine to assist against a possible Russian attack, Kirby said, though more than 100 Florida National Guard troops are now in the country on an advise-and-assist deployment to help train Ukrainian troops.

“They remain at work alongside their Ukrainian counterparts … and we expect that that mission will continue,” he said. “We're going to continue to watch the situation on the ground and if we need to make decisions for force-protection purposes, we'll do that.”

For now, Kirby said there are no planned changes to the National Guard’s mission or number of U.S. troops in Ukraine.

The State Department official said the movement of Russian troops is especially concerning given that a Belarus constitutional referendum coming in February “includes language that could be interpreted as paving the way for Russia to garrison forces in Belarusian territory.”

“These draft constitutional changes may indicate Belarus plans to allow both Russian conventional and nuclear forces to be stationed on this territory,” the official said. “This would be a significant change for Belarus and such a step would present the challenge to European security that may require a response.”