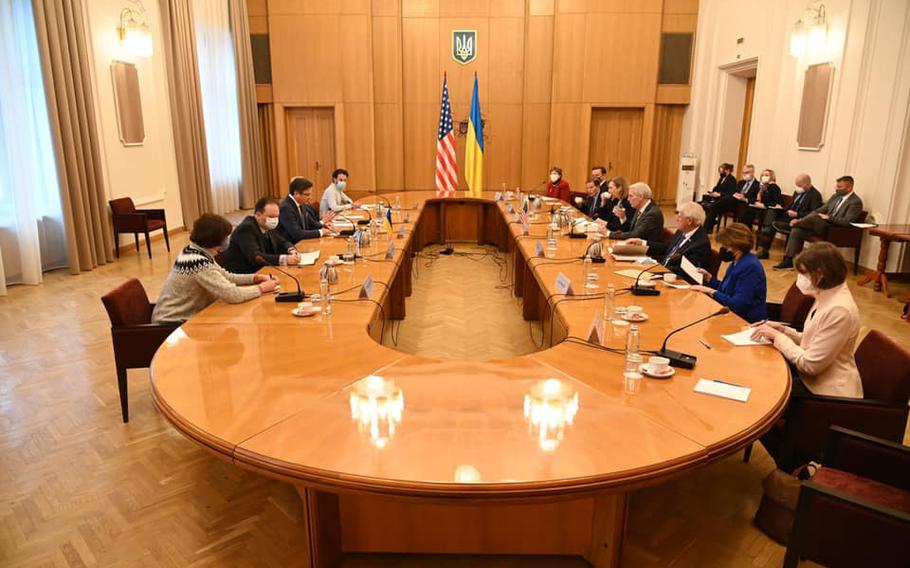 A bipartisan group of U.S. senators is in Ukraine to show solidarity with the Eastern European country as it faces ongoing tension with Russia.

The seven U.S. senators held a series of meetings in Kyiv on Monday with President Volodymyr Zelenskyy and other top officials in his government. The visit comes as Russia has massed an estimated 100,000 troops near portions of its border with Ukraine and diplomatic efforts to resolve the crisis have faltered.

“Our bipartisan congressional delegation sends a clear message to the global community: The United States stands in unwavering support of our Ukrainian partners to defend their sovereignty and in the face of persistent Russian aggression,” said Sen. Jeanne Shaheen, D-N.H., one of the lawmakers leading the congressional delegation.

Sen. Rob Portman, R-Ohio, also part of the delegation, said in a statement that as Ukraine “continues to defend its territorial integrity against an increasingly aggressive Russia, while also striving to enact critical domestic reforms to solidify its democracy - it is more important than ever that the U.S. support Ukraine in its efforts.”

The Biden administration and lawmakers from both political parties have become increasingly concerned in recent weeks that Russia may be preparing to invade Ukraine.

Senate Democrats, with the backing of the President Joe Biden, unveiled legislation last week that would impose sanctions on Russian President Vladimir Putin, and other top Russian military and government officials and key banking institutions, if Moscow engages in hostilities against Ukraine.

A proposal from Sen. Ted Cruz, R-Texas, to sanction entities involved in Russia’s Nord Stream 2 pipeline, an effort to pressure Russia not to move on Ukraine, was voted down Thursday. The White House opposed Cruz’s bill, saying it would “undermine unity” among European allies at a sensitive time.

Biden administration officials have warned that the Russian government has sent operatives into eastern Ukraine in preparation for potential sabotage efforts that could serve as a pretext for a renewed Russian invasion. “The operatives are trained in urban warfare and in using explosives to carry out acts of sabotage against Russia’s own proxy-forces,” a U.S. official said Friday, referring to Russian-backed separatists who have been waging a war against Ukrainian forces in Ukraine’s eastern Donetsk and Luhansk regions.

For months, top Russian officials have been warning that Ukraine is preparing an attempt to retake the separatist regions in its east. Top Ukrainian and U.S. officials have denied having any such plans and described the Russian comments as an effort to cast Kyiv falsely as an aggressor and lay the groundwork for a new invasion.

The Kremlin has sought formal assurances that the United States and NATO will halt the alliance’s eastward expansion and dial back its military presence in Eastern Europe, demands that U.S. and NATO officials rejected during a series of talks with their Russian counterparts last week.

The Washington Post’s Isabelle Khurshudyan in Moscow contributed to this report.