In their shared sea, Ukraine and Russia already risk direct conflict every day

by
Isabelle Khurshudyan and Serhiy Morgunov
• The Washington Post • December 25, 2021 A Ukrainian navy sailor at his post on the command ship Donbas off Mariupol, Ukraine, on Dec. 15. (Serhiy Morgunov/for The Washington Post)

MARIUPOL, Ukraine — When the Ukrainian navy command ship was close enough to Russia’s shore to get the country’s state television channels, Capt. Oleksandr Hryhorevskyi switched on the news and wondered: Why all the fuss about his rusty old boat?

The appearance of his more-than-50-year-old vessel — aptly named Donbas, for the eastern region locked in an eight-year conflict between Ukraine’s armed forces and Moscow-backed separatists — dominated Russian broadcasts one night this month. With an estimated 100,000 Russian troops massed on Ukraine’s border, the near-confrontation between Russian forces and the Donbas in the Sea of Azov could have been the spark for war on the ground.

Russia’s main domestic intelligence agency, the FSB, accused the Donbas of navigating toward the Kerch Strait, the waterway between mainland Russia and annexed Crimea, which the ship hadn’t filed for permission to pass. The FSB said the Donbas ignored its instructions to correct course — and Kremlin propagandists quickly labeled the ship’s action a “provocation.”

Margarita Simonyan, editor in chief of the government-funded television channel RT, banged the war drum loudest on Twitter. “Has it started? Mother, don’t let me down,” she wrote.

The flare-up ended when the Donbas turned around, less than three nautical miles from the Kerch Strait. But the incident, though ultimately harmless, underscored a strategic weakness for Ukraine’s military in a tinderbox for war.

The Sea of Azov, a shallow internal body of water, smaller than Lake Michigan and bounded by Russia and Ukraine, is the one place the two countries’ forces risk direct conflict daily. It’s packed with Russian ships — there are about four times as many of them as there are Ukrainian vessels, according to Andrii Klymenko, the Kyiv-based editor in chief of the Black Sea News. And because there is no maritime border in the sea, the Russian fleet can get as close to the Ukrainian shore as it wishes, arguably making Ukraine’s southeastern seaside cities the most vulnerable in the country.

U.S. intelligence has warned that the Kremlin could be planning a multipronged military attack against Ukraine as soon as early next year. For all the international attention paid to the concentration of Russian troops on Ukraine’s land borders, if an invasion originates from the sea, Ukrainian forces are largely powerless. They cannot legally take any action against until the first Russian soldier steps on land.

Meanwhile, Ukraine’s fleet is limited in its movement on the Azov by what Kyiv says is Russia’s regular practice of restricting some zones at little notice for what it claims are artillery training exercises. The Ukrainian navy said this month that nearly 70% of the Azov was blocked for transport because of navigation warnings from Moscow.

“In terms of security, the Sea of Azov is dominated by Russia,” Foreign Minister Dmytro Kuleba told The Washington Post. “And in case of war, it will be heavily used by them to put pressure on our southern cities on the Azov shore.”

“Under the current circumstances,” Kuleba said, “of course Russia dictates the situation in the Azov and basically uses it as a war theater.” 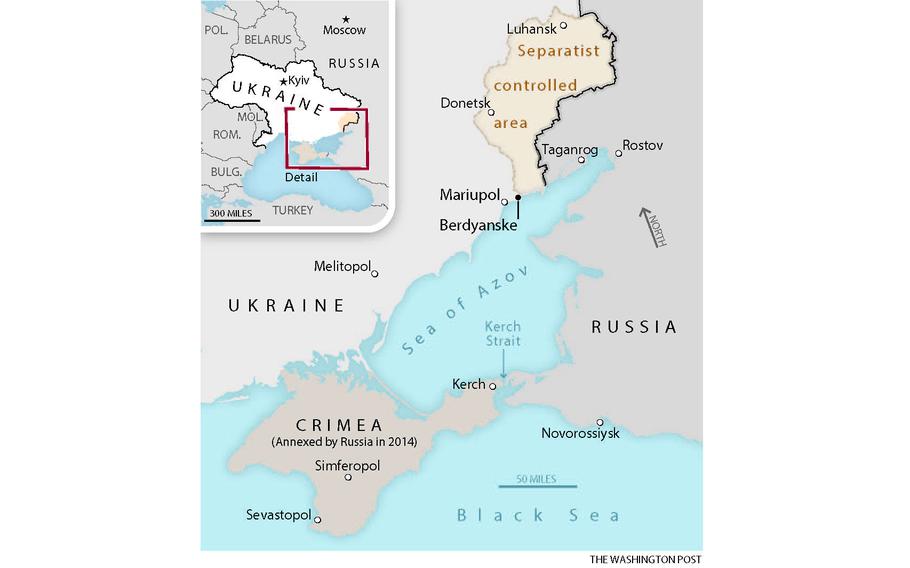 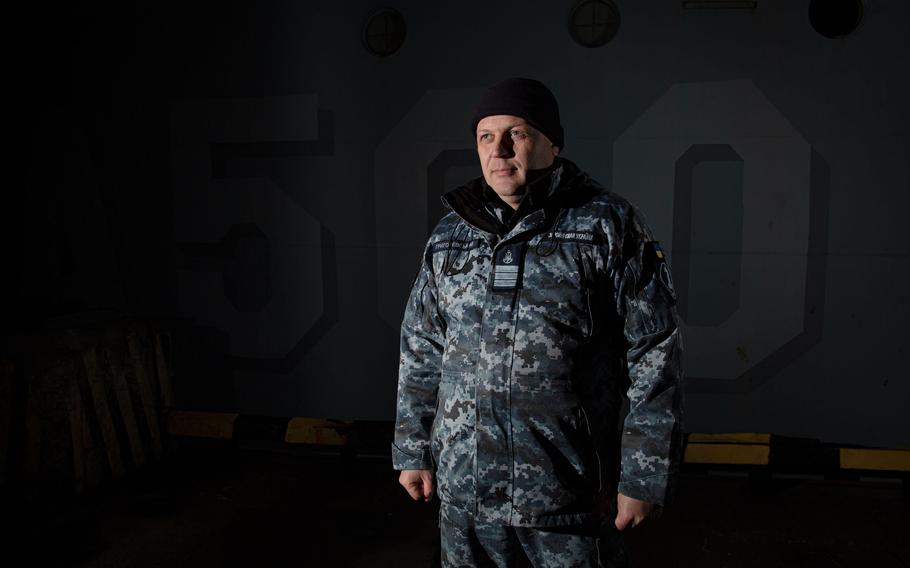 Captain 3rd Rank Oleksandr Hryhorevskyi, commander of the Donbas, on board the ship. (Serhiy Morgunov/for The Washington Post) Hryhorevskyi said the Donbas was anchored on Dec. 8 when he received a Russian navigation warning that the zone it was in was closing. That left him nowhere to go but in the direction of the Kerch Strait, he said. At around 1:30 p.m. on Dec. 9, a Russian ship contacted the Donbas to remind it that passage through the waterway required 48 hours’ notice. Hryhorevskyi said the Donbas responded that it did not plan to sail through the Kerch Strait. He said the vessel was unarmed.

Hryhorevskyi said a Russian attack aircraft flew over the Donbas and one of the Russian ships tailing it threatened to open fire if it didn’t reverse course.

The next day, Russian Foreign Ministry spokeswoman Maria Zakharova told state television that the Donbas represented a “new provocation at sea” that was part of a string of “provocative actions that are being carried out around our borders.” In recent weeks, Russian officials have claimed that it is Ukraine and NATO that are threatening Russia at its border.

Ukrainian officials have accused Russian ships of harassing their fleet in the Azov for years. Maritime border guards who patrol the sea in camouflage-patterned speedboats have documented actions by the Russians they deem “provocations” to present as evidence in international court filings. 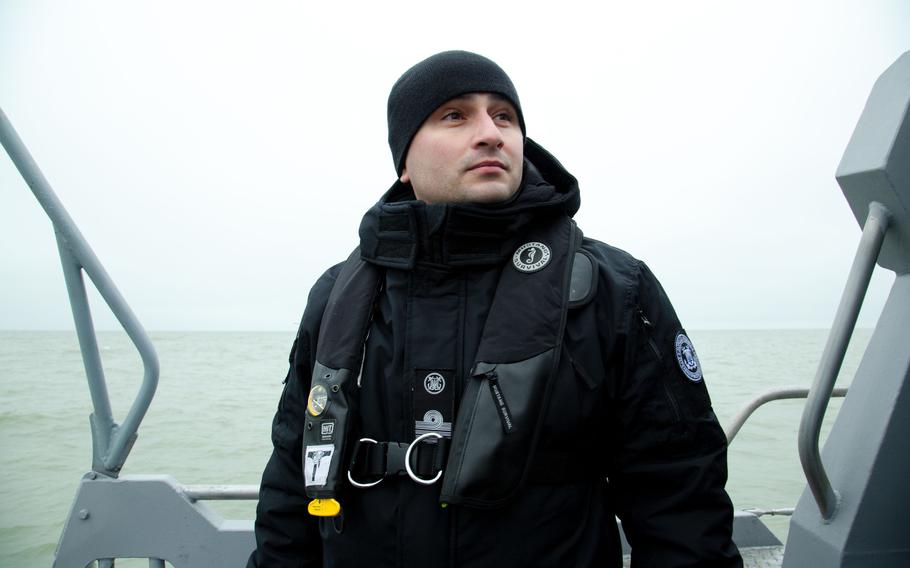 Sometimes, a Russian ship will launch an aggressive course toward a Ukrainian one before making a last-second turn away, said Lt. Cmdr. Volodymyr Yarovyi, acting deputy chief of staff for the Ukrainian Maritime Border Guard. More often, he said, the Russian coast guard will attempt to hinder Ukrainian commercial ships by blocking their predetermined routes or conducting time-consuming searches of the cargo.

One armed guard, standing on the stern of a Ukrainian Maritime Border Guard patrol boat, described an attempt to check a foreign cargo ship. His team informed the crew over radio dispatch, but then a Russian coast guard boat closer to the cargo ship moved between the vessels and threatened to consider it an attack if the Ukrainians came within two nautical miles.

“This is war, too,” said Oleksiy Danilov, secretary of Ukraine’s national security and defense council. “This is an element of their military strategy of how to beat our country.”

Though those alleged actions by Russia aren’t new, other, perhaps more troubling, ones are. Klymenko, the analyst, said Russia has started issuing navigation warnings to close sectors nearer to the shore, sometimes just three miles away, “where you don’t need binoculars” to scout the location, Klymenko said. Russia has declared three such areas, near the Ukrainian ports of Mariupol, Berdyansk and Kherson, closed from Dec. 8 to Jan. 8, Klymenko said.

“What they have in mind, only time will tell,” Klymenko added. “Maybe it’s just psychological pressure, or maybe it’s really preparation for a possible war landing on the shore.”

There’s a case to be made that the Azov’s shoreline is of more strategic and economic value to Russia than Ukraine’s war-battered eastern border regions. The Ukrainian land along the sea is what divides mainland Russia from annexed Crimea. The Ukrainian port cities of Mariupol and nearby Berdyansk on the sea’s western shore export products from the region. Just 60 miles up the coast, the Russian port of Taganrog is a hub for trade through Russia’s southwest.

Danilov, of the national security and defense council, called the Azov “a very difficult spot for us.” Ukraine lost 70% of its naval fleet in 2014 when Russia seized Sevastopol, the Black Sea port on the Crimean Peninsula. Defense Minister Oleksiy Reznikov said last month that construction of a new naval base in the Azov port of Berdyansk would be accelerated to “repel Russian aggression in that region.”

Danilov warned that any attempt to invade Ukraine through the sea would be countered by Ukraine’s arsenal of Neptune anti-ship missiles, a batch of which the country ordered last year. 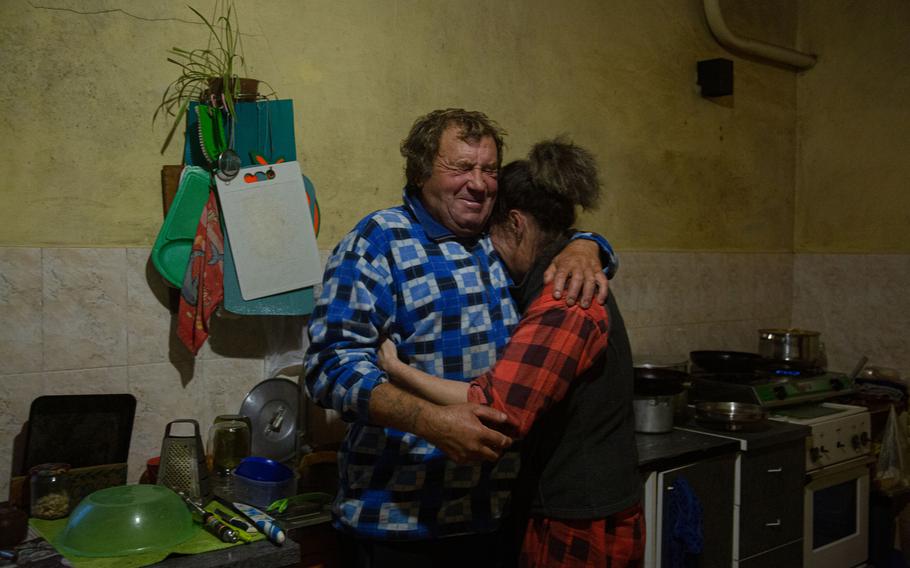 Fydor Pahomov and his wife, Natalia, at home in the village of Berdyanske, recall memories of surviving the shelling of nearby Shyrokyne during the war with Russia-backed separatists. (Serhiy Morgunov/for The Washington Post)

The trickle-down effects of tension at sea can also be felt on the shore, 15 miles east of Mariupol. There, the small village of Berdyanske used to be a cozy vacation spot and a hub for fishers. Now, because it’s close to territory controlled by Russia-backed separatists, cars have to pass at least three Ukrainian military checkpoints to get there.

The flow of tourist money has stopped. So has fishing. The Ukrainian military fortified the shoreline several years ago by deploying land mines throughout the water. Though locals say a winter freeze long ago caused all of the mines to explode, signs still warn people against entering the water.

There’s no longer a fishing base in the village, which means permits for those in the area aren’t issued.

In Fydor Pahomov’s sea-facing yard, tangled bundles of fishing nets hang off clotheslines. He used to have five fishing boats working under him. His main source of income has been stunted for years now.

Pahomov said he’s worried about a looming war with Russia. But most of all, he’d like to get back on the sea.

“How am I supposed to feed two kids?” he asked. “This is nonsense. But this is how we live.”