Gorbachev’s resignation 30 years ago marked the end of USSR Mikhail Gorbachev, the final leader of the Soviet Union, signs the decree relinquishing control of nuclear weapons to Boris Yeltsin at the Kremlin in Moscow, Wednesday, Dec. 25, 1991. Gorbachev announced his resignation in a live televised address to the nation on Dec. 25, 1991, drawing a line under more than 74 years of Soviet history. (Liu Heung Shing/AP)

MOSCOW — People strolling across Moscow's snowy Red Square on the evening of Dec. 25, 1991, were surprised to witness one of the 20th century's most pivotal moments — the Soviet red flag over the Kremlin pulled down and replaced with the Russian Federation's tricolor.

In his memoirs, Gorbachev, now 90, bitterly lamented his failure to prevent the USSR's demise, an event that upset the world's balance of power and sowed the seeds of an ongoing tug-of-war between Russia and neighboring Ukraine.

"I still regret that I failed to bring the ship under my command to calm waters, failed to complete reforming the country," Gorbachev wrote.

Political experts argue to this day whether he could have held onto his position and saved the USSR. Some charge that Gorbachev, who came to power in 1985, could have prevented the Soviet breakup if he had moved more resolutely to modernize the anemic state-controlled economy while keeping tighter controls on the political system.

"The collapse of the Soviet Union was one of those occasions in history that are believed to be unthinkable until they become inevitable," Dmitri Trenin, the director of the Moscow Carnegie Center, told The Associated Press. "The Soviet Union, whatever its long-term chances were, was not destined to go down when it did."

By the fall of 1991, however, deepening economic woes and secessionist bids by Soviet republics had made the collapse all but certain. A failed August 1991 coup by the Communist old guard provided a major catalyst, dramatically eroding Gorbachev's authority and encouraging more Soviet republics to seek independence.

While Gorbachev desperately tried to negotiate a new "union treaty" between the republics to preserve the USSR, he faced stiff resistance from his arch-rival, Russian Federation leader Boris Yeltsin, who was eager to take over the Kremlin and had backing from other independent-minded heads of Soviet republics. 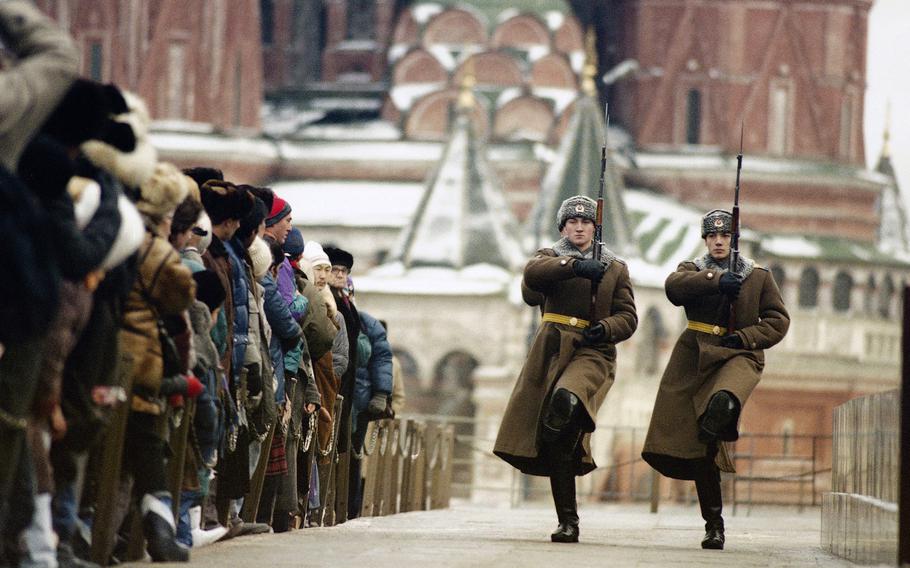 Soviet citizens watch honors guard soldiers during the changing of the guard at Lenin’s Mausoleum in Red Square, Moscow, Russia, on Dec. 11, 1991. On Dec. 8, 1991, the leaders of Russia, Ukraine and Belarus declared the USSR dead and announced the creation of the Commonwealth of Independent States, an alliance joined two weeks later by eight other Soviet republics. (Alexander Zemlianichenko/AP)

On Dec. 8, the leaders of Russia, Ukraine and Belarus met in a hunting lodge, declaring the USSR dead and announcing the creation of the Commonwealth of Independent States. Two weeks later, eight other Soviet republics joined the newly formed alliance, handing Gorbachev a stark choice: step down or try to avert the country's breakup by force.

The Soviet leader analyzed the tough dilemma in his memoirs, noting that an attempt to order the arrest of the republics' leaders could have resulted in a bloodbath amid split loyalties in the military and law enforcement agencies.

"If I had decided to rely on some part of the armed structures, it would have inevitably triggered an acute political conflict fraught with blood and far-reaching negative consequences," Gorbachev wrote. "I couldn't do that: I would have stopped being myself."

What would have happened had Gorbachev resorted to force is hard to imagine in retrospect, the Carnegie Center's Trenin observed..

"It might have unleashed bloody events in Moscow and across Russia, maybe across the Soviet Union, or it might have consolidated some things," he said. "Had he decided to go down that route...there would have been blood on his hands. He would have had to turn into a sort of a dictator, because that would have...done away with his most important element of legacy; that is, not using force in a massive way."

When the leaders of Russia, Belarus and Ukraine declared the Soviet Union defunct, they didn't pay much attention to what would happen to the 4-million-strong Soviet military and its massive nuclear arsenals.

After the Soviet collapse, it took years of U.S.-led diplomatic efforts to persuade Ukraine, Belarus and Kazakhstan to hand over to Russia the Soviet nuclear weapons left on their territories — a process finally completed in 1996.

"The leaders of the republics that announced the end of the Soviet Union in December 1991 did not think through all the consequences of what they were doing," Gorbachev's aide, Pavel Palazhchenko, told the AP.

Russian President Vladimir Putin, whose two decades at the helm is longer than Gorbachev and Yeltsin's tenures combined, has famously described the Soviet collapse as "the greatest geopolitical catastrophe of the 20th century."

"The breakup of the Soviet Union was the collapse of a historic Russia," Putin said in a documentary that aired this month on Russian state television. "We lost 40% of the territory, production capacities and population. We became a different country. What had been built over a millennium was lost to a large extent." 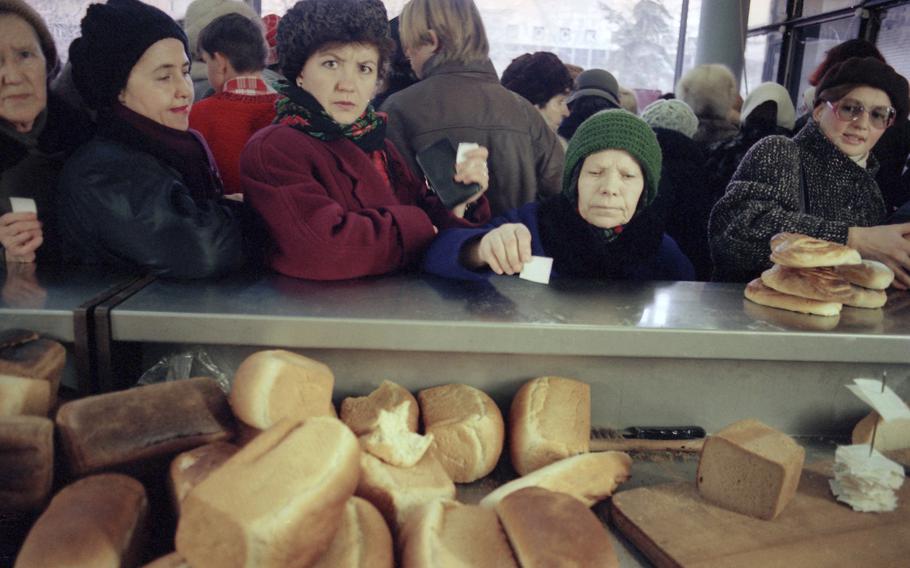 Several women wait with their tickets in hand, for fresh bread at a bakery in Moscow, Monday, Dec. 23, 1991. (Gene Berman/AP)

The Kremlin moved to redraw the post-Soviet borders in 2014, responding to the ouster of Ukraine's former Moscow-friendly leader by annexing the Ukrainian Crimean Peninsula and throwing its weight behind separatist rebels in its neighbor's east.

More than seven years of fighting in Ukraine's eastern industrial heartland has killed over 14,000 people. Tensions flared up in recent weeks over a Russian troop buildup near Ukraine that fueled Western fears of an invasion.

Moscow has denied plans for an offensive and sternly urged the U.S. and its allies to provide a binding pledge that NATO wouldn't expand to Ukraine or deploy weapons there — a demand rejected by the West.

Putin and his officials countered the Western argument that Russia doesn't have a say in the alliance's expansion by emphasizing the country's right to protect its core security interests.

"Russia has never pretended to have the right of vote to make decisions for other countries," Konstantin Kosachev, a deputy speaker of the upper house of Russian parliament, told the AP. "But we have an absolute right of vote to ensure our own interests and security, and to offer our vision of a security environment in the nearby regions."

While Putin has repeatedly denied intentions to rebuild the USSR, he has described Russians and Ukrainians as "one people" over angry protests from Kyiv and charged that Ukraine unfairly inherited historic parts of Russia in the Soviet demise.

The Russian leader further toughened his rhetoric Thursday amid spiraling tensions with the West, blaming Soviet founder Vladimir Lenin for handing Russian lands to Ukraine to "create a country that had never existed before."