On Ukraine, Putin keeps Washington and its allies guessing 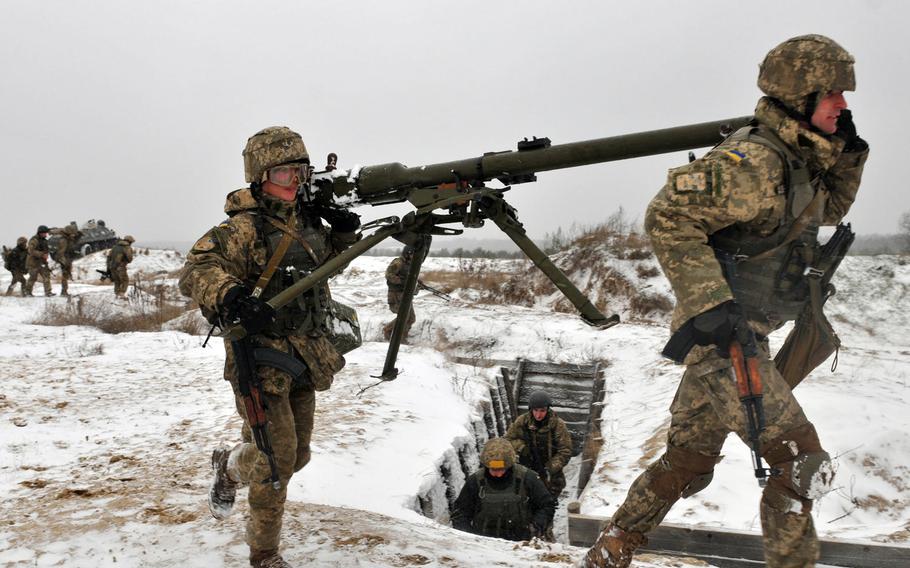 President Joe Biden faces a dilemma as the United States prepares for European security negotiations with Moscow amid the threat of a new Ukraine invasion: How much should Washington accommodate Russian President Vladimir Putin — and would any plausible concessions be enough for him to stand down?

Those questions will be top of mind for U.S. officials and their European allies, who are in the early stages of organizing talks with the Russians on the myriad complaints Putin has made about Ukraine, NATO and a European security environment he says is overly threatening to Moscow.

Putin’s demands, and whether to make any concessions, are already testing the unity of the 30-country NATO alliance.

Some leaders, including Biden, believe that talking to the Russians and possibly making accommodations to address Putin’s concerns are worth staving off a renewed war in Europe that could be far more deadly than Russia’s initial 2014 operation in Ukraine. Other officials contend privately that Putin will never be satisfied short of bringing Kyiv firmly back into Russia’s orbit and that he shouldn’t be rewarded for his intimidating behavior with any compromises.

State Department spokesman Ned Price on Thursday emphasized that even at the height of the Cold War, talks played a critical role in increasing transparency and reducing tensions.

Putin’s high-stakes brinkmanship by massing troops near the border with Ukraine has left the United States and its allies guessing about what the Russian president really wants or is prepared to do — a state of affairs that the former KGB lieutenant colonel has been known to relish.

“It all comes down to where Putin’s head is and what he feels is good enough to take back to the Kremlin. There is no one on this planet other than Putin who knows the answer to that question,” said Andrea Kendall-Taylor, a Russia analyst at the Center for a New American Security. “So, the point is, we try. We really try to go through this diplomatic process. We put in a good-faith effort.”

In the days since Biden’s call with Putin on Tuesday, Moscow has further escalated its rhetoric on Ukraine and continued its shipments of materiel to locations near the Ukrainian border.

On Thursday, Putin resurfaced rhetoric that Moscow used in the run-up to its 2014 invasion of Ukraine, suggesting that a “genocide” was targeting Russians in Ukraine’s eastern Donbas region. The same day, the Conflict Intelligence Team, a group that monitors the Russian military, spotted howitzers, main battle tanks and a Buk antiaircraft system on Russian trains not far from Ukraine.

Having established leverage over the West with the buildup, Putin and his top advisers have articulated a range of demands. During the call with Biden, Putin said Russia wants legally binding guarantees that NATO will not expand eastward to include Ukraine or deploy offensive weapons systems in countries bordering Russia, according to a Kremlin readout of the call. Putin has also said the United States and its allies are ignoring the Kremlin’s red lines by flying strategic bombers near Russia.

The White House has suggested that a U.S. guarantee excluding Ukraine from NATO is a nonstarter.

The United States and its allies theoretically could strike a deal limiting certain exercises or weaponry near Russia’s borders, but it is unclear if that would satisfy Putin. Some analysts have expressed worry that the Russian leader is making demands that he knows Washington will reject, possibly as a pretext for military action once he is spurned.

“I don’t see us giving them anything that would suffice relative to their demands, and what troubles me is they know that,” said Michael Kofman, a Russian military analyst at the Virginia-based research group CNA. “They also can’t just back down from this level of crisis without tangible gains.”

The standoff comes as Secretary of State Antony Blinken arrives in the British city of Liverpool for a meeting of the Group of Seven leading industrial democracies. On Saturday morning, Blinken is scheduled to discuss Russia’s threat to Ukraine with his counterparts from Canada, France, Germany, Italy, Japan and Britain.

“We’re watching it closely. And we’re working with our partners to be very clear that when Russia’s behavior crosses boundaries that are expected of responsible nations, that there will be costs to that,” said Erica Barks-Ruggles, a senior official in the State Department’s Bureau of International Organization Affairs.

The United States has been working to build leverage of its own, rallying European allies to agree on a package of harsh economic measures that would be leveled against Russia if Putin were to proceed with an offensive.

Biden laid out some of those consequences during his video meeting with Putin, according to the White House, which has said it would reach for punishments harsher than those meted out after the 2014 invasion.

The Biden administration has said the talks with Russia on NATO activities in Europe will be paired with a drive to reinvigorate the 2015 Minsk agreement, a pact brokered by France and Germany that laid out a path to ending the conflict between Ukrainian forces and Russian-backed separatists in the Donbas region.

Still, Putin’s escalating rhetoric this year on Ukraine has given many the impression that he ultimately will accept nothing short of a Kyiv back under Russia’s influence, which at a minimum would mean an end to Zelensky’s pro-Western government and U.S. support for Ukraine.

In a treatise in July, Putin accused Ukraine of becoming a vassal state manipulated and controlled by the West to undermine Moscow. He said true sovereignty for the nation is possible only in partnership with Russia, and he called Russians and Ukrainians one people.

“The Kremlin increasingly views Ukraine as a Western aircraft carrier parked just across from Rostov . . . in southern Russia,” Eugene Rumer and Andrew S. Weiss, Russia analysts at the Carnegie Endowment for International Peace, wrote last month. “Ukraine is now one of the largest recipients of U.S. military assistance, a fact that surely is not lost on anyone in the Russian national security establishment.”

Putin sees bringing Ukraine back under Kremlin influence as his single most important piece of unfinished business as he contemplates his legacy, Rumer and Weiss argued.

That desire could complicate any future talks.

“If those are his demands and those are his interests, if it is really about those more maximalist things, I don’t think there is anything we, in a principled way, could give that would alleviate his concerns,” Kendall-Taylor said. “So that puts us back to the point where we started. The threat of military force is still really there.”