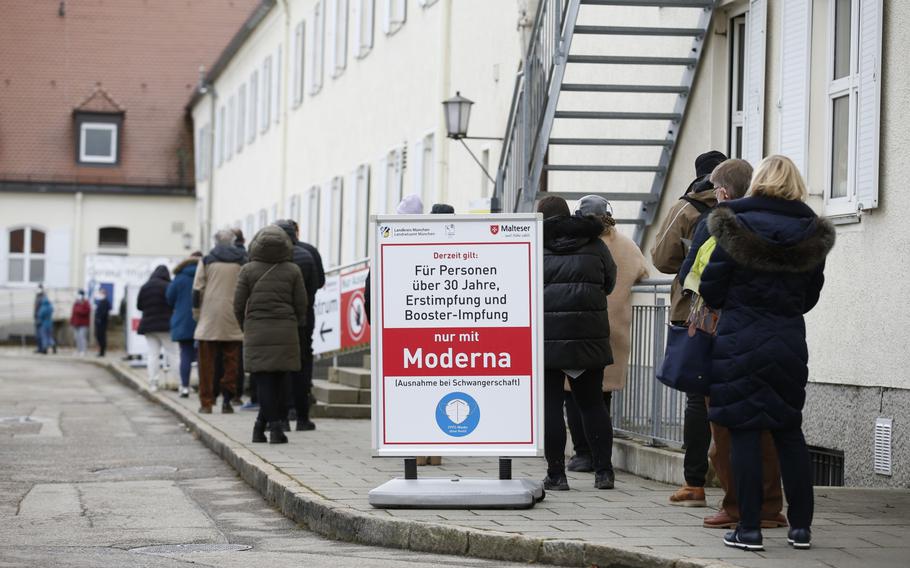 Visitors wait to receive COVID-19 vaccines at a vaccine center in Munich on Dec. 2, 2021. (Michaela Handrek-Rehle/Bloomberg)

Germany imposed stringent nationwide restrictions on people who aren’t vaccinated against COVID-19 and limited attendance at soccer games and other public events to check a brutal surge in infections.

In one of her final acts as chancellor, Angela Merkel held talks with her incoming successor, Olaf Scholz, and Germany’s 16 regional premiers on Thursday, where they agreed on new curbs including allowing only people who are vaccinated or recovered into restaurants, theaters and non-essential stores.

The officials also backed a plan to make COVID shots compulsory, saying that the lower house of parliament would vote on it soon. Scholz said he expects the measure to pass, and Merkel said she would vote for it if she was in the Bundestag.

“We’re in a very, very difficult situation,” said the Social Democrat, who is due to be sworn in on Wednesday. “We have very many citizens who are vaccinated but not enough to prevent another wave of infections. Those who have not been vaccinated must do so, and that’s my very urgent personal appeal.”

A vaccine mandate would be a major departure after Merkel and other officials insisted shots would be a personal choice. The soft tone may have contributed to Germany’s relatively tepid uptake, with less than 70% of the population fully inoculated. The step will be controversial, and further protests from vaccine opponents are all but assured.

Germany’s change in power after the Sept. 26 election has slowed the government’s response to a resurgence in the pandemic. Despite the growing urgency as hospitals fill up, authorities were keen to avoid blanket curbs and close schools.

The new measures include tighter contact restrictions for non-vaccinated people, shutting nightclubs in places with high infection rates and strict limits on the number of spectators at large public events.

The agreement makes the guidelines national. Some regions with high infection rates like Bavaria and Saxony had already tightened restrictions, and states continue to have the authority to clamp down harder locally.

While there has been some recent good news, with Germany’s infection rate slipping for a third straight day, medical officials have warned that the situation remains serious.

“We are seeing something of an easing but at a level that’s far too high,” Merkel said in what could be her final press conference as chancellor. “That’s why we needed to agree these measures today.”

The head of the DIVI intensive-care lobby predicted on Wednesday that the number of COVID patients in ICUs will reach 6,000 by Christmas, exceeding the previous record. Thursday’s level of 439.2 cases per 100,000 people over the past seven days is still more than double the peak in the spring.

To protect more people, authorities want to administer as many as 30 million vaccine doses by the end of the year, including boosters. Officials also want to significantly expand the pool of people who can give shots, including using qualified workers in drug stores and care facilities.